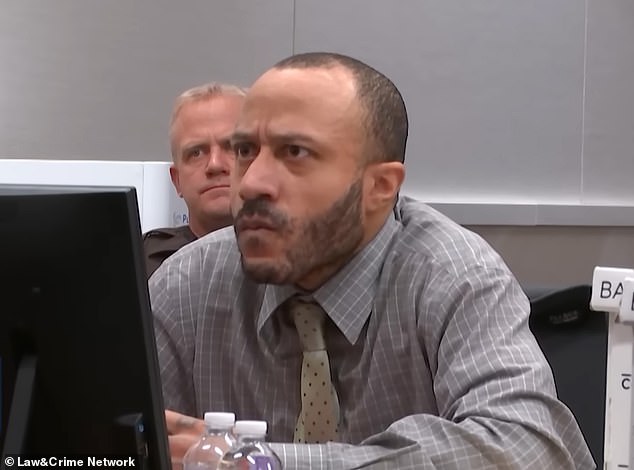 The judge in the case of a man accused of driving his automobile through a procession in Wisconsin has admitted to being “scared” by his outbursts of crying, stripping, napping, and staring her down during the trial.

On November 21, 2021, Darrell Brooks, 40, allegedly plowed through the crowd during a Christmas parade in Waukesha, Wisconsin, killing six individuals between the ages of eight and eighty-one and injured over sixty more.

Brooks chose to represent himself in his trial, but his constant interruptions, outbursts, and erratic behavior have resulted in his removal from the courtroom and the judge’s admission that she is afraid of him.

Dorow stated on Friday that Brooks was giving her a’stare-down’ that she deemed disrespectful and ‘frightening’ Brooks continued to look at the judge while pounding on the table with his fists.

USA Today reported that Brooks had just finished accusing the prosecution of teaching Brooks’ own witnesses, an allegation for which Dorow stated there was “no factual basis.”

The trial became something of a sideshow at numerous occasions, as Brooks was pulled to participate virtually in a different courtroom multiple times and yelled that the court lacked “integrity” when the jury was dismissed for the day.

Brooks has at times refused to recognize his own name and has regularly murmured under his breath that the trial is unfair and objected to nearly every question prosecutors have posed to witnesses, mostly without success.

After the judge muted his microphone so she could read his 77 counts without interruption, he stuffed a laminated sign stating “objection” under the waistline of his orange prison garb.

Brooks reminded the jury earlier this week that there are always two sides to every story, while constantly stressing the amount of’suffering’ the parade incident had caused, including his own.

He stated that nothing that occurred during last November’s attack on a parade was intentional, and he wept over the monstrous and demonic labels he has received since his incarceration.

Finally, Brooks told the jury that he wanted them to see him for who he truly was and that it was up to them to evaluate what was true and what was not.

Last year, he is accused of killing six people by plowing an SUV through a Christmas procession in Wisconsin.

She noted that his statements should be based on the law and admissible evidence.

Brooks began by asserting that there are two sides to every story.

Every narrative has two sides, he said.

Brooks described what occurred at the parade as a tragedy while reminding the jury that every tale has two sides.

He then began to choke back tears and wipe his eyes with tissue. He stated that the entire neighborhood, including his family, is suffering.

“Many words have been spoken regarding the alleged, along with much speculation and mockery. Words like ‘devil.’ Words like ‘molester,” he said.

He attempted to have the case against him dismissed on the basis of insanity, but he withdrew his plea early last month without providing an explanation.

At one point, he began interrupting the judge within a minute of the start of the proceedings, and was subsequently removed after a dispute with the judge about his decision to wear prison garb to court.

Dorow has consistently refused to back down, and after moving Brooks to another courtroom, she stated that she would not back down despite his attempts to “mock” the proceedings.

She stated as Brooks was seen shirtless with his back to the camera on a video feed: ‘It is abundantly clear to this court that everything Mr. Brooks has done as outlined by the state and as made manifest by the court of this proceeding has been done with the sole intent of making a mockery of this process.’

‘It is essential that the legal system move on with this proceeding. We have reached this point with Mr. Brooks muzzled in another courtroom due to his rebellious conduct alone,’ she added.

Brooks could be seen in the other courtroom gesticulating violently, arguing with court police, and holding up an objection sign to everything Judge Dorow said with his microphone muted at all times except when he was asked to speak or answer questions.

She stated, “No one in this case has ever had a competency concern,” adding, “I am completely persuaded he is 100 percent competent to proceed to trial.” We are one hundred percent certain that his behavior is planned and intentional. He is trying to sabotage these processes.

“I share your observations,” the judge said, adding that she believed his actions was an act of “defiance” rather than a sign of mental illness.

Brooks, a resident of Milwaukee, was caught near the attack location on November 21 and has been detained ever since.

Brooks, according to prosecutors, intentionally drove his vehicle through police barricades and into the crowds attending the annual parade in Waukesha, some 15 miles west of downtown Milwaukee.

After allegedly confronting a woman outside of a motel before the procession, Brooks drove through the crowd.

According to law enforcement sources, the suspect returned and smacked the victim in the face before running her over.

The ages of the victims ranged from 8 to 81 years old, and more than 60 persons, including at least 18 children, were hurt.

If convicted on the most serious charges, Brooks, who was out on bail for a domestic violence charge at the time of the attack, risks life in prison.

The man’s lengthy criminal record dates back to 1999, when he was arrested for aggravated violence and carrying a concealed weapon for the first time.

Since then, he has had at least fifteen other encounters with the authorities.

Multiple counts of impeding an officer, possession of a controlled narcotic, paternity warrants, failure to appear in court, and other charges have been filed against Brooks.

In 2010, he was accused of strangulation, suffocation, and domestic abuse, which was one of the most severe charges against him.

The trial was expected to last about a month, but Brooks’ decision to represent himself may extend the proceedings, despite Dorow’s warning that the court will not accept purposeful acts of obstruction, according to the Journal Sentinel.

However, this week’s court proceedings were not the first in this trial.

WISN stated that during an appearance on August 26, Brooks fell asleep multiple times before ranting at Dorow.

As she stood with her arms folded, he stated, “You sit up here and behave as if you know me.”

“People like you know nothing about my background,” he continued.

Brooks was also overheard saying that he was “bored” by the proceedings, and he became enraged at the sheriff’s deputies as he was led out of court per Judge Dorow’s orders.

The defendant referred to the trial as “political” and continued to verbally assault the judge.

At one point, Brooks expressed to Dorow his desire to return to his cell.

His attorneys, public defenders Anna Kees and Jeremy Perri, filed a motion in April requesting a delay of the proceedings until at least March 2023.

The attorneys argued in the motion that they need at least six months to examine more than 300 videos of the parade, dissect the SUV’s speed throughout the incident, review Brooks’s police interrogation, and contact expert witnesses.

Brooks requested a change in his plea to not guilty by reason of mental disease or defect during a hearing in June.

The six fatal victims of the Waukesha Christmas Parade killer

Darrell Brooks, 39, now faces 61 counts of recklessly endangering safety by use of a dangerous weapon for each person injured at the November 21 incident, along with the six homicide charges, according to court records filed on Wednesday.

He is accused of plowing through the crowd at the parade on November 21, killing six and injuring dozen others.

Four of the five people who were killed were members of the Milwaukee Dancing Grannies.