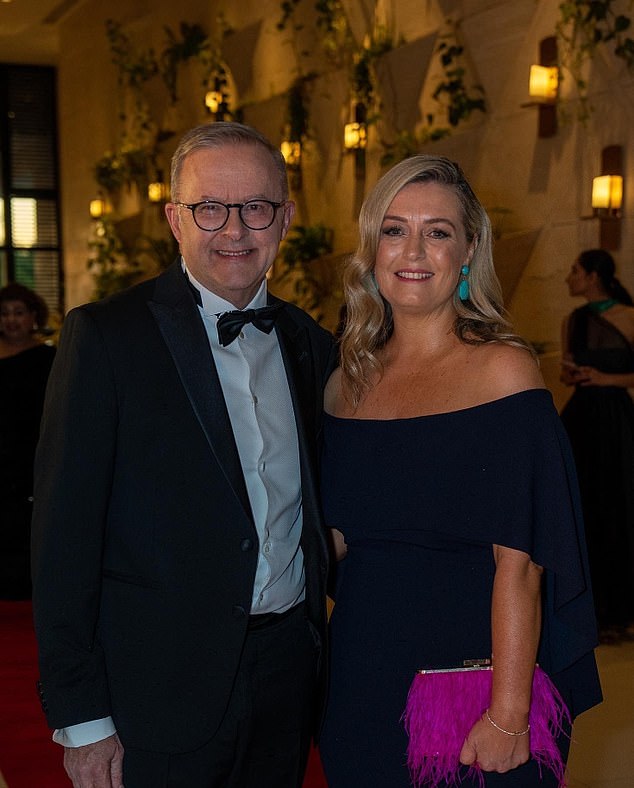 To raise money for sick children, Anthony Albanese and his partner Jodie Haydon let their hair down and dressed to the nines.

On Saturday evening, the Prime Minister took time out of his busy schedule to attend the Telethon Ball.

The most prominent charity ball in the country was attended by Seven West Media chairman Kerry Stokes and WA premier Mark McGowan.

Mr. Albanese struck a distinguished figure in a black bow tie and suit, while his partner, Ms. Haydon, drew attention in a strapless evening gown.

Sunday, the Prime Minister announced that the federal government will donate $6 million to the charity.

He made the remark while answering calls from residents wishing to make donations at the Telethon call center.

Mr. Albanese stated that he was ecstatic to be a part of the initiative and that it was “one of the first activities I scheduled in my calendar after becoming prime minister.”

It was impossible for me to overlook it, he told The Sunday Times.

I am excited to participate in my very first Telethon since I am aware of the influence this legendary event has made in the lives of tens of thousands of children and families over the past 55 years.

“Telethon would not be possible without the generosity of Western Australians who give generously each year. Let’s make this year an unprecedented success.

He stated, “We donated $10 million last year, so I believe that’s the new baseline for what the State will do.”

Hancock Prospecting, Mineral Resources, and the Stan Perron Charitable Foundation are among those who have contributed more than $1 million to this cause.

Since its debut in 1968, the Telethon has raised close to $500 million dollars.

The foundation aims to aid sick children and their families by supplying hospitals with equipment and disabled youngsters with essential services.

Approximately 58,000 children and 24,000 families have been assisted by the foundation.