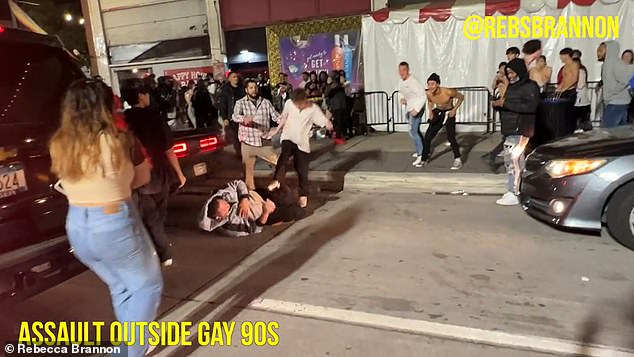 With one man beaten in the street and wild brawls breaking out, a shocking web video reveals how how crime-ridden downtown Minneapolis has become.

The video released online by Rebecca Brannon on Saturday night depicted a chaotic scene outside The Gay 90s, with girls twerking on top of police cars and yelling at a police horse as an officer attempted to break up a fight between the ladies.

After a fight broke out in front of the bar, authorities in the video instructed the girls to “go out and keep moving,” but the group remained belligerent, cursing at the mounted officers.

At one moment, it looks like one of the girls attempts to pet the officer’s horse, prompting him to exclaim, “Don’t touch my horse!”

A group of individuals are shown attacking a victim in the street outside a gay bar in an online video.

Saturday night, one of the males kicked the victim in the face as he attempted to stand up.

A second picture depicts women yelling at a police horse after cops attempted to break up a dispute.

Saturday night’s confrontation occurred amid other displays of depravity outside the club, with the beginning of the horrifying video clearly showing one man being assaulted.

A number of males were observed kicking the victim, who was already in fetal position, until he rolled onto the roadway.

The victim then attempts to stand, but one of his attackers kicks him in the head.

The picture then switches to emergency medical services personnel carrying an assault victim on a stretcher and lifting him into an ambulance.

Other clips showed women shouting, pushing, and punching each other outside the pub prior to the arrival of the police, as well as ladies twerking on top of a car that was blocking traffic.

‘It’s been a while since I’ve gone downtown at night due to the violence and shootings,’ Brannon wrote on Sunday, adding that she’saw a lot more commotion than I anticipated, especially given the weather’

Brannon stated that throughout the night ‘police were scarce’ and the’situation felt combustible,’ so she attempted to maintain her distance.

There have been many gunshots in the vicinity of the Gay 90s in the past few months alone.

Saturday night, the assault victim was observed laying in the middle of the road as his attackers returned to the pub.

A second altercation occurred between a group of ladies outside the Gay 90s pub.

Also captured on camera were women twerking atop cars that stopped traffic outside the club.

As a result of the Defund the Police movement, crime in the city continues to spiral out of control, prompting the release of this film.

Thefts of motor vehicles in the city are up 38.4% compared to the same time last year, while larcenies are up 24.8%.

Additionally, property crimes are up 14.8% from the previous year, while assaults are up 8.8%.

Crime in the city has increased by a staggering 15.9 percent since last year.

CNN reported that 93 people were shot in the city in the past year, which is close to the number of murders in 1995, when the city got the label Murderapolis.

This year, it ranked nineteenth out of seventy jurisdictions in terms of murders per capita.

Moreover, its clearing rate for homicide cases has decreased since 2016, when around 54 percent of cases were solved.

Since Minneapolis became the core of the Defund the Police campaign, criminal activity has exploded out of hand.

According to experts, the spike in crime began following George Floyd’s death in May 2020, when the city became the epicenter of the Defund the Police Movement.

The city of Minneapolis erupted in violent riots, with demonstrators demanding justice for Floyd and advocating for the dissolution of the Minneapolis Police Department.

Officials of the City Council eventually conceded and vowed to “end policing as we know it” in July 2020.

The council reduced the city’s policing budget by $1.1 million, with plans to reallocate the funds to the public health department to employ civilian violence interrupters who would mediate conflicts.

Residents claim that police began to retreat from the most hazardous districts shortly thereafter.

Longtime resident KG Wilson stated, “The criminals were celebrating.” They were becoming wealthy. They were brazenly selling drugs.

In May 2020, following the killing of George Floyd, protesters demanded the abolition of the Minneapolis Police Department. During one of the riots, a demonstrator is pictured here standing in front of a burning structure.

Officials of the City Council eventually conceded to the demonstrators’ demands and vowed to “end policing as we know it” in July 2020. In front of the Third Police Precinct, we observe protesters with their fists raised while flames grow behind them.

Simultaneously, the death of Floyd resulted in a huge migration of Minneapolis police officers during the past two years due to retirements, resignations, and disability leaves.

The number of officers in the city decreased from 900 in early 2020 to approximately 560 in August of this year, a reduction of more than one-third of the police force, according to police department leaders.

In May 2020, the average 911 response time increased from from 10 to 11 minutes earlier in the year to approximately 14 minutes.

CNN claims that it increased to 16 minutes in 2021, with response times exceeding 17 minutes in the city’s crime-ridden north side.

On some evenings, dispatchers are instructed to hold any non-priority-1 calls throughout the whole city, including reports of property damage, suspicious persons, and theft.

In rare instances, the Minneapolis Police Department has refused to respond in a timely manner to certain crimes, due in part to a lack of personnel and also to low morale.

The National Police Association’s Sgt. Betsy Brantner Smith stated, “It’s no secret that law enforcement, particularly in the last two and a half years, has been unfairly and unjustly demonized.”

Affluent citizens raised $210,000 to pay the city’s police force for additional patrols in the Lowry Hill neighborhood, where violence was on the rise.

Now, citizens are attempting to reclaim their city.

In November 2021, 56 percent of voters rejected a motion to defund the police and replace them with a ‘public health-focused’ Department of Public Safety.

This number was much higher in north Minneapolis, a primarily black neighborhood where 60 percent of this year’s calls for guns fired originated.

Affluent locals also raised $210,000 to pay the city’s police force for more patrols in the Lowry Hill neighborhood, where violence is on the rise.

The Minneapolis Safety Initiative, a resident-created nonprofit that raises funds for more police patrols, refers to the initiative as a “temporary approach to counter the present crime wave while MPD works to rebuild to full staffing.”

In order for the campaign to have its ‘desired impact,’ residents are encouraged to donate $220 every month for six months.

In the summer of 2020, eight residents of the north side filed a lawsuit demanding that the city replace vacant jobs in the police department.

The lawsuit accused city council members who supported the extreme “dismantle the police” proposal, as well as Mayor Jacob Frey, of fostering a “hostile” climate for cops.

It was mainly backed by a state Supreme Court ruling this summer, requiring the city to hire at least 731 officers.