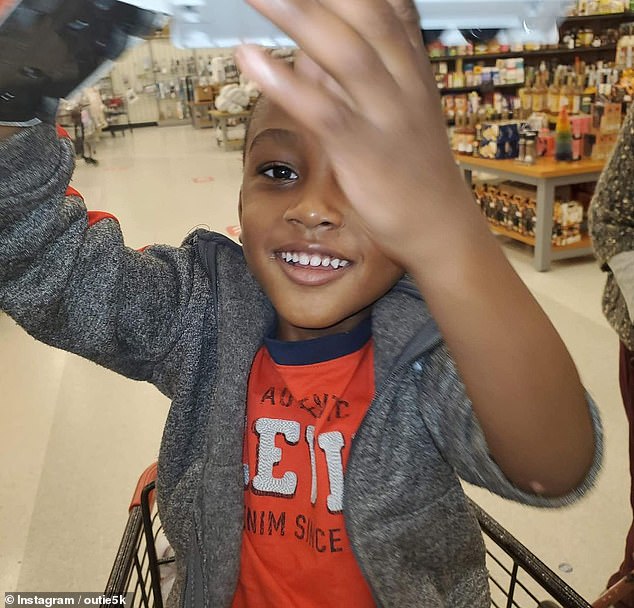 Six months after his body was discovered in a suitcase in the woods near Salem, Indiana, authorities have identified the five-year-old child.

Police stated in a press conference on Wednesday that his mother, Dejaune Ludie Anderson, 37, and another lady, Dawn Elaine Coleman, 40, murdered the boy after posting on social media that they believed he was a demon.

The boy’s father, Vincent Jordan, 33, posted an online homage to his kid, stating that Anderson had fled with their child in 2017 after a custody dispute, and that he had been searching for them ever since.

Anderson is approximately 5’5″ tall and has short, dark brown hair in her last known photograph. According to cops, she is known to frequently use wigs and extensions.

According to court filings, Anderson and Coleman were identified as suspects after their fingerprints were matched to those on the trash bag in which 5-year-old Cairo was found.

The police were also able to track the two women’s cell phones to the region where the bag was discovered on April 14, two days prior to its discovery.

On the day the luggage was discovered, a camera filmed Anderson’s 2019 Dodge Challenger traveling south on Interstate 65 across a bridge from Indiana to Kentucky.

The police investigating Cairo’s death discovered a number of social media pages related to Anderson and Coleman in which they claimed to be “living with a demon child.”

In court filings, a number of social media posts made by the two ladies are detailed. This past February, Anderson posted:

“In order to exorcise a very powerful demonic force from my son, I had to elevate my frequency, heal myself and past lifetimes, heal my ancestors, heal s**t in the universe, and heal Gaia,” the author explains.

In another April posting, Coleman stated:

Check to see if the children you believe to be children have souls or if they are actually malevolent beings with souls.

According to court records, photos and videos on Coleman’s social media channels depict her holding the Las Vegas suitcase.

On March 12, one month before the finding of Cairo, Anderson’s Dodge Challenger led authorities on a 30-mile pursuit in South Carolina. Coleman and the child were in the car at the time of the incident.

According to court filings, the pursuit began after she was discovered going 92 mph on a route with a speed limit of 60 mph. The pursuit continued until her vehicle ran out of gas.

After the pursuit, neither Anderson nor Coleman unlocked the car doors to give police entry, so they were forced to break the rear driver-side window in order to gain access to the vehicle.

Anderson was subsequently transported to the Colleton County Jail, while Coleman and the youngster were transported to a nearby Hilton hotel. During the time of arrest. Anderson advised law enforcement that Coleman was her sister.

On March 31, just a few weeks later, Anderson was arrested again. She was spotted concealing products in a bag in a shopping mall, and when asked by a security guard about the theft, she punched them in the face.

She was then brought to the Kentucky Jefferson County Jail.

The boy, whose name is now Cairo, died of electrolyte shortage, most likely caused by vomiting or diarrhea, according to an autopsy report released in May.

In June, a funeral was performed for the youngster, who was unnamed at the time. On his tombstone, the inscription “In loving memory of a cherished little boy known only to God” was inscribed.

“My heart was shattered into a million pieces today.” On April 14, 2022, I received a call from an officer informing me that my 5-year-old kid, Cairo Jordan, was murdered by his mother, Dejuan Anderson, in Indiana.

Today is his birthday, October 25, and I was just informed of his death. My family and I have spent three years searching for Dejuan and Cairo.

In 2017, at the beginning of our custody battle, she took him away and threatened to call the police on me if I came to pick him up on the agreed-upon weekend. She did not appear in court, and it kills me since that weekend was the last time I saw my son.

As a father, I feel defeated since this was the only thing I feared in the world.’

March 12: Anderson, Coleman and the child are all in a Dodge Challenger that leads police on a chase in South Carolina. Anderson is arrested.

March 31: Anderson is arrested again in Kentucky after punching a security guard who catches her stealing from a mall.

April 14: Anderson and Coleman are understood to have dumped Jordan’s body in the Las Vegas suitcase in the south Indiana woodlands.

April 16: Police said a man who was hunting mushrooms found the boy’s body in a woodland area in Washington County that evening about 80 feet from a rural road in Indiana.

April 17: Police released information on the case and asked for help identifying the child or his parents.

April 19: Police released that the 5-year-old’s body was found inside a suitcase in the hopes that someone would recognize it. The suitcase was in good condition with Las Vegas logos wrapped around it.

May 28: Police said the child died from an electrolyte imbalance, most likely due vomiting and diarrhea, leading to dehydration. Police said he was found clean and clothed and there was no indication he was placed in the suitcase alive.

June 1: The unidentified child was buried in Salem. The funeral was funded by donations.

October 26: Indiana State Police announced the arrest and named both the boy and the suspects.