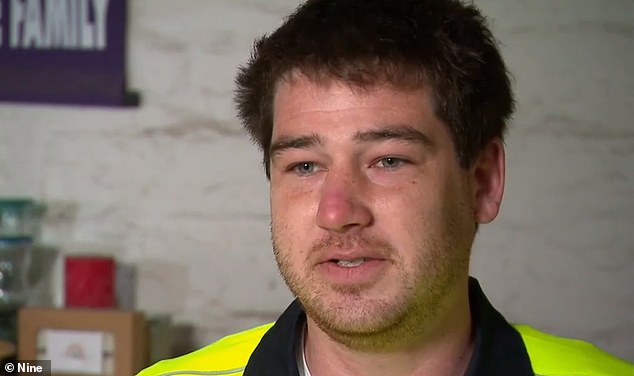 An experienced bricklayer said that bullying and the offer of drugs in lieu of pay nearly prompted him to abandon his apprenticeship.

Robert Dunne from Melbourne reported that during his first job at the age of 16, he was instructed to carpool with a coworker who used marijuana before driving.

He stated that he informed his father of the situation and subsequently quit his apprenticeship to return to school.

Only approximately 55.7% of Australian construction apprentices finish their training, with many departing to find alternative employment, according to research (file image)

Later, he returned to the profession and completed his apprenticeship with a different Mornington Peninsula business.

However, Mr. Dunne stated that he remained concerned about the flippant attitude of certain industry members.

I would not repeat the action. Due to the absence of workplace safety, it is not something I would recommend to young people,’ he said.

He stated, “We have primary school instructors who are carefully regulated and through several checks, but we also have grown men who do drugs, drink, and drive while teaching people how to build houses.”

The site is flooded with TikTok recordings showing senior tradespeople hazing their trainees, demonstrating that Mr. Dunne’s situation was not unique.

In one video, a tradesman splatters his apprentice’s hair with spray paint, whereas in another, an apprentice tiling a shower is drenched as the water is turned on.

After a poor encounter during his first apprenticeship, Robert Dunne (pictured) says he almost left the brick laying trade.

According to data from the National Centre for Vocational Education Research, only 55.7% of those who begin apprenticeships finish them.

The number of apprentices who completed their training in 2021 was the lowest in more than two decades.

According to a research published by The McKell Institute last month, bullying and wage theft were the leading causes of apprentice departures.

The Working, Learning: Better Supporting Victorian Apprentices on the Job report indicated that the majority of Victorian apprentices were ignorant of the existence of a state apprenticeship regulator and that the organization received fewer than ten complaints annually.

Michael Buckland from the McKell Institute stated, “We are in the middle of a skills deficit, and yet over half of apprentices do not complete their programs.”

We need as many bricklayers as possible, thus the fact that bricklaying isn’t viewed as a viable vocation is really concerning.

»Bullying almost made a bricklayer quit his apprenticeship«