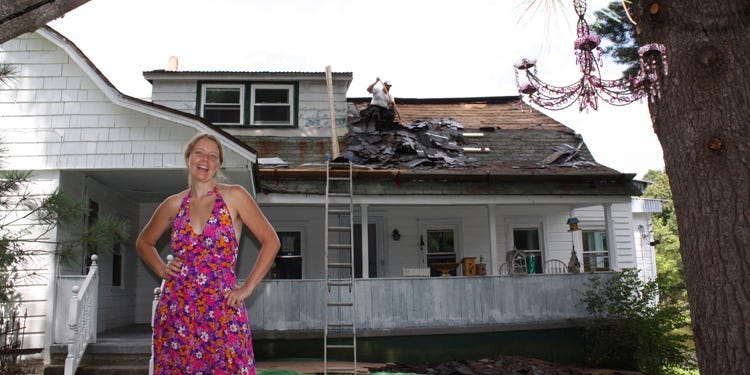 After the global financial crisis ended in 2009, Kat O’Sullivan and her partner Mason Brown were living in a Brooklyn loft bedroom. The pair was living there with a rotating cast of housemates in a disused tannery that had been transformed into an artist’s warehouse.

According to O’Sullivan of Insider, the pair was having trouble making sense of the outside world and decided it was time to look for a home of their own.

“We were simply dejected as we saw our funds evaporate into thin air. I was drawn to buying land because it was the one thing that was stable and real compared to everything else, “said O’Sullivan.

Around the same time, O’Sullivan’s Etsy company, where she sold vibrant handmade patchwork jumpers, started to take off: “It sort of went viral, so we were able to purchase a home,” she said.

They didn’t take long to fall in love with a farmhouse built in the 1840s in Kingston, some 90 miles north of New York City.

The home required updating and has had the same owner for the last 60 years.

Nevertheless, according to O’Sullivan, the pair believed the Hudson Valley property had the greatest promise for its price. It was different from what they were accustomed to in New York City and came with a pond.

The pair was also able to profit from the falling prices since it was immediately after the collapse of the economy, she said.

They purchased the home for roughly $220,000, according to O’Sullivan, which was a price they “couldn’t have afforded previously.”

The couple hadn’t anticipated the makeover to be as substantial as it was since the home hadn’t been altered since the 1950s.

None of the pipes were exactly correct, none of the windows opened, and there was no insulation, according to O’Sullivan.

The roof, foundation, and septic system all had to be replaced by the couple in addition to the aesthetic upgrades, she added.

Painting the home was the simplest part of the procedure, despite the vibrant exterior colour palette.

Actually, it wasn’t that lengthy, just a month’s worth of weekends, according to O’Sullivan. “But people react to and are most interested in that. Even though it required a lot more effort, no one has ever inquired about how long my septic system took to install.”

Along the way, they employed skilled builders, but the pair served as the general contractor and assisted with duties as needed.

I didn’t install my own septic system, according to O’Sullivan, who added that “we had pals who helped us out” and “we absolutely employed specialists.” “I never disconnected from the process, even if all I was doing was taking out the nails and painting.”

The couple decided to create a time capsule for the subsequent owners after discovering artefacts left behind by past inhabitants while tearing down the walls.

Old letters, a vintage bottle of port wine, and medicinal ointment are among the things they discovered.

Along the way, there were additional shocks, such as the fact that one of the rooms’ walls were lined with newspapers rather than with adequate insulation, according to O’Sullivan.

According to O’Sullivan, it cost roughly $1,000 in paint to cover the whole façade of the house.

When she entered the paint shop, she said, “Give me one of everything!”

The house’s front is painted in all the hues of the rainbow, much like the patchwork jumpers she creates.

When viewing the outside, most people fail to notice that black is “by far the hue that’s most utilised,” according to O’Sullivan. She put a black frame around each colour block to make them stand out, which required twice as much black paint as any other colour.

“It used to be the type of home you would pass by while driving and never notice. Everyone now moves more slowly and even pauses to gaze “Added she.

According to O’Sullivan, they spent “far more on improvements than the property is worth.”

The property currently has 10 rooms total, including the basement, as a result of past owners adding rooms throughout time.

She described it as being somewhat patchwork, which is amazing since she does patchwork for a job.

The couple also rebuilt five dilapidated outbuildings that came with the property.

The home’s inside is just as bright, elaborately furnished, and brimming with the couple’s individuality as its outside.

The couple used a distinct theme to design each room in the home. From their trips and antique shops, they have filled the house with mementos and antiques.

“I adore everything I’ve discovered. I go thrift shops often since I work with recycled sweaters, and I like collecting items and putting them together to see which arrangement produces a feeling of enchantment “said O’Sullivan.

The turquoise kitchen in the home, which is outfitted with functional antique equipment, is one of O’Sullivan’s favourite spaces.

The kitchen underwent many changes before becoming completely turquoise, according to O’Sullivan. “I think it’s dramatic because the rest of the home is pretty colourful and all of a sudden there’s a room that’s one hue,” the speaker said.

Nearly all of the furniture was purchased from Craigslist, thrift shops, or salvage yards, so nothing in the home is brand-new.

“A large portion of it is made up of items we created from scraps of old architecture. For instance, the wood from ancient church altars was used to make our bed “explained O’Sullivan.

Nothing in the home is mass-produced, which is something O’Sullivan is proud of: “Nothing in this house is from Ikea. Nothing from West Elm is present. Nothing that you discover here may be purchased online.”

To match the interior design themes of their rooms, O’Sullivan and Brown repainted and reupholstered the majority of their furniture.

“I’ll remove all the mismatched tables and chairs and paint and reupholster them uniformly. Consequently, even if the forms vary, the colour palette unites them “explained O’Sullivan.

Even her staircase was painted with a checkerboard pattern by O’Sullivan, creating an optical illusion.

O’Sullivan compares the stairs to the drawings of MC Escher, a Dutch artist famous for depicting a series of intersecting staircases that form an impossibly triangular connection.

O’Sullivan installed a bar at the bottom of the stairs so that she may hold onto it if she falls since the stairs are a trip hazard. She stated that nobody has been wounded thus yet.

O’Sullivan claims that, in contrast to popular belief, their home is not messy since she is a clean freak who is continually getting rid of things.

Take her framed collection of insects in the “Jungle Room,” for instance. The lack of furniture in the space, she remarked, gives the impression that there is a lot going on.

Although it is quite adorned, she said, “I really really strive to keep clarity in the items I have.” “I like emptiness. When I get rid of a piece of furniture, I feel really successful.”

Masks made of papier-mâché that O’Sullivan brought back from Ecuador fill one corridor.

On New Year’s Eve, effigies are burned in Ecuador as a representation of letting go of the past. These effigies often sport worn-out clothes and a mask made of papier-mâché.

The bedrooms are designed more subduedly than the general areas.

The room configurations are not fixed; according to O’Sullivan, she often changes them: “I sometimes get bored. I never leave anything alone for more than a few years before rearranging it.”

The elderly attic was converted by the couple into a space for meditation. The room is typically left unoccupied, however O’Sullivan sometimes uses it to store his sweaters.

Part of the home was damaged when a tornado tore through the neighbourhood two years ago, according to O’Sullivan. She made the decision to build a wall of windows leading out to a balcony on the side of the attic during the renovations.

After ten years, having windows and natural light all of a sudden is quite nice, she said.

O’Sullivan and Brown have gradually added to their property so that they have more rental-ready structures.

“An nearby property is put up for sale every few years. I devise a careless plan that enables me to purchase it, and then I determine how to pay for it “explained O’Sullivan.

Aside from the main property, she presently owns four neighbouring properties totaling around 70 acres, according to her.

“It’s nice that I have rental properties because it’s growing very substantial. I have a feeling that my pals will eventually settle there “Added she.

Although the pair has owned the home for more over ten years, O’Sullivan claims the restoration process “truly never really stopped.”

At this time, O’Sullivan remarked, “I want to sell it all and live in a condo because I’m quite sick of it.

The couple still spends time making repairs to the house, which is constantly changing. For the last 13 years, O’Sullivan said, it has been their lives each and every week. Even the most creative people may get worn out by that type of upkeep.

“We were too immature to realise the scope of the project. We believed that if we just painted it, everything would be great “Added she. “Now that I know, I wouldn’t purchase this place again.”