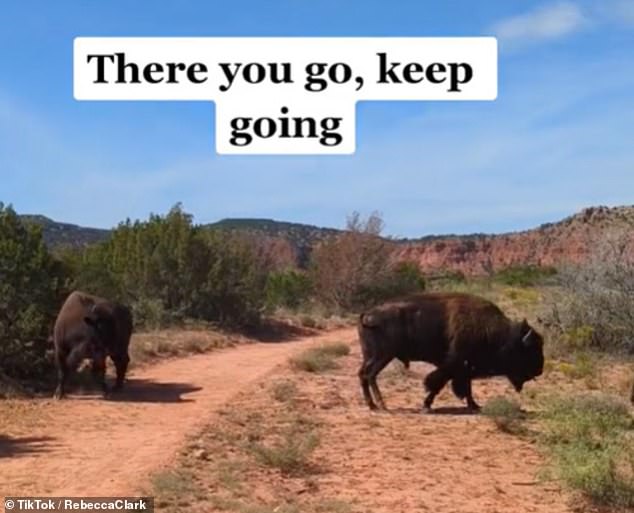 A terrifying TikTok video of a Texas hiker who was assaulted and gored by a bison in a state park has gone viral.

Earlier this month, while on a solo hike at Caprock Canyon State Park, Rebecca Clark recorded the herd as it passed in front of her and waited for them to pass.

But when she attempted to leave too fast, one of the hostile animals saw her and lunged at her, pushed her into a bush, and sliced a hole in her back.

Rebecca Clark is heard stating, “There you go,” at the beginning of the video, which was posted on October 12. “Go forth….

I’d rather avoid dealing with them. I just want to go. Continue on, please.

Clark decided it was safe to resume her hike along the same route the bison had just crossed.

However, she had gone too quickly, as one of the bison turned to attack at her as she attempted to cross after hearing Clark.

Clark screams in terror and drops her phone in a nearby mesquite shrub after saying, “Oh sh*t… Oh my God.”

She was hurt by the bison and had to wait for a rescue by a medical helicopter for 50 minutes until it arrived to take her to the hospital.

Clark claims that the bison “rammed my back, gored me, and hurled me into a mesquite bush” in a subsequent video. She subsequently had stitches for a “hole in her back” at United Regional in Wichita Falls after being flown there.

In response to a remark, she said that the zoom feature on her phone camera had made it seem as if the bison was closer to her than it really was.

Clark acknowledged that she ought to have waited longer, however.

But you know it’s going to make a heck of a tick tock (sic),” Clark says to first responders in a text message that was shown on TikTok.

The caption says, “I was charged and gored by a bison because I was to CLOSE to be passing them on a trailway.”

They are stunning animals that the Texas Parks & Wildlife Department (TPWD) protects. As part of the Texas State Bison Restoration Project, the park has returned the legendary Charles Goodnight Bison herd (The Official Texas State Bison Herd) to a section of its historic territory.

The caption for the subsequent video states, “I’m OK!” “I appreciate your worries and, to be honest, your humor as well. After a close encounter with a bison in Caprock Canyon State Park, I’m on the mend.

According to the subtitles on the video, she was admitted to the hospital with non-life-threatening wounds and a “hole in my back and dozens of stickers and thorns, but I am OK!”

The Texas Parks and Wildlife website states that there should be at least 50 yards between a herd of bison and a group of humans.

It suggests using the “Rule of Thumb” while hiking or being near to a herd: If your thumb can’t cover a bison, you are too close.

If a hiker comes within 50 yards of a bison, the bison will often elevate its tail or drop its head.

Additionally, if the bison exhibit unexpected changes in behavior, it is advisable to evacuate the area.

The bison are seen swinging their tails and lowering their heads in Clark’s footage, which was shot within 50 yards, before the herd suddenly pauses off the route.

Her assault comes after a grizzly bear in Wyoming mauled two college wrestlers while they were out hunting.

Following the Saturday afternoon incident that left them “blood-soaked,” the Wyoming Game and Fish Department stated in a written statement that both men were taken to nearby hospitals, one of them by helicopter.

According to the preliminary information, the agency said, “This looks to be a sudden, unexpected encounter with a grizzly bear.”