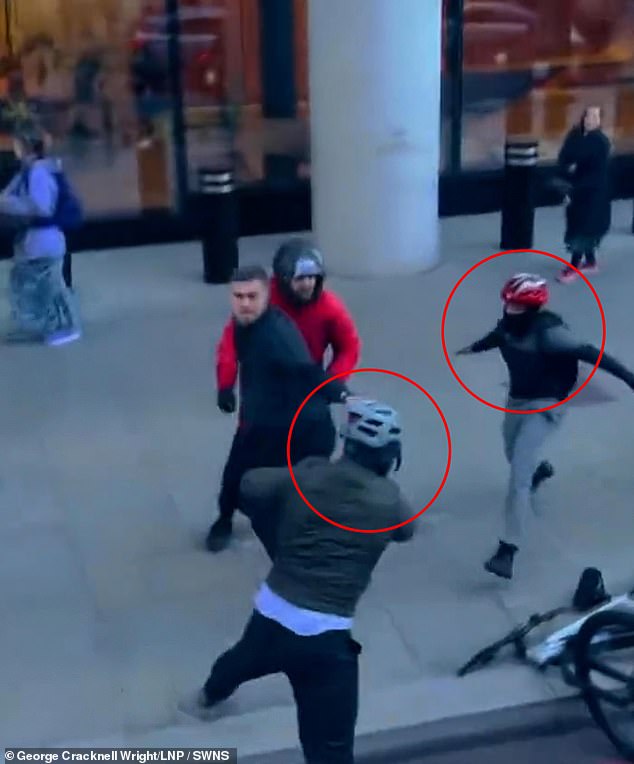 A high-flying city broker who had 52 stitches after being horribly sliced across the face was one of the victims of the dreadful Bishopsgate stabbings, as revealed by MailOnline, and who has been hailed a hero by his wife.

I’m proud of him for being so courageous, but my gosh, I was frightened, tweeted Helen Carr, whose husband, financial worker Henry Charlton-Weedy, intervened to assist the victim of a mobile phone heist.

Britain was stunned by the sights of chaos during the theft during rush hour and thereafter, which were recorded on shocking cell phone film in the heart of London’s financial center.

Mother-of-two Ms. Carr, a 33-year-old award-nominated novelist and historian, gave her 15,000 followers a summary of her tumultuous week: “My spouse participated in the Thursday stabbings at Bishopsgate.”

He was “stabbed on the street,” she said.

When her husband Henry, 35, received sorrow from friends and followers, she responded: “All much better and he’s on the mend.”

‘We’re good, just coming down from the shock of it all,’ she assured fellow well-wishers. It’s a tremendous comfort that they charged someone as well!

Two males on pushbikes attempted to steal a phone from outside a City office during morning rush hour, but members of the public, including Mr. Charlton-Weedy, intervened, a court heard earlier this week.

Louis Parkinson, 25, was given the knife by the first thief, who then cut another guy in the face, according to evidence presented before Westminster magistrates.

Prior to 9:45 a.m. on October 6, Parkinson is charged with causing serious bodily injury on Mr. Charlton-Weedy outside the 22 Bishopsgate tower.

Additionally, he is suspected of planning with a companion who is still at large to rob Nicholas Badger and Paul Grange.

Additionally, he is accused of having a dangerous weapon and cannabis, the latter of which was discovered on him when police searched his home yesterday.

People raced to try to drag the two to the ground as Parkinson attempted to take a phone from a bystander who called out for aid.

Before giving the knife to Parkinson, who is accused of stabbing the victim, Parkinson’s friend first cut bystanders.

The stabbing victims were rushed to the hospital, however it is thought that none of them have serious injuries that might endanger their lives.

The prosecutor, Aarya Mishra, stated: “The defendant and another guy were riding pedal bikes across London together.

They were working together to steal phones from a variety of victims. As a result, a chain of what have been called very violent occurrences occurred.

“The defendant attempted to steal a phone from a bystander who screams out to other bystanders to try to apprehend the defendant and his companion.

His buddy pulled out a knife and cut many bystanders. He then gave it to the defendant, who had cut a bystander so severely that he needed 52 stitches.

Parkinson’s attorney Kishoree Kotecha-Pau did not request bail and only spoke to remind the court that Parkinson was taken into custody at his house rather than the site of the crime.

He was remanded by the magistrates into jail and will make his next appearance at Inner London Crown Court on November 8.

The Red Prince: John of Gaunt, Duke of Lancaster, written by Ms. Carr, was a top-seller when it was released in the spring of 2021 and was included in lists of the year’s finest novels by the Times and Sunday Times.

The work made the Elizabeth Longford Prize for Historical Biography shortlist for 2022. She produces and hosts the podcast Hidden Histories, writes a monthly piece for BBC History Magazine, and has featured on TV and radio as an authority on the subject.

She is a member of the Royal Historical Society and is described as “one of the most fascinating and gifted young historians out there” by TV historian Dan Snow. Whether on the written page or the screen, she is always enthusiastic and engrossing and has an infectious love for medieval history.

Mr. Charlton-Weedy, a broker for a Japanese reinsurance firm, attended the £42,000-per-year Shrewsbury School and earned an English Literature and Language degree from Leeds University.

He is the son of retired Army Major-General Michael Charlton-Weedy, a deputy lieutenant of North Yorkshire, a former commander of the 4th Field Regiment of the Royal Artillery, and a former executive of the Emergency Planning College.

When contacted by MailOnline, Cambridge residents Henry Charlton-Weedy and his wife refused to make any more comments.