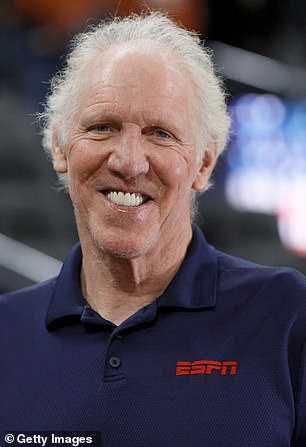 As homeless camps encroach on the city, bringing vandalism and garbage in their wake, former NBA star Bill Walton is ranting against San Diego’s progressive mayor.

Walton, 69, has pleaded with Mayor Todd Gloria in a number of letters to his office over the last two weeks to address the problem of homelessness.

The Voice of San Diego notes that Walton highlighted a legislation in Los Angeles that forbids encampments near schools and continually cites law enforcement, even though he never specifies what he wants the mayor to do about the problem.

Walton stated in one email that he had been attacked by several homeless people while cycling through a park.

On August 28, he said on his blog, “Once again, while calmly riding my bike early on a Sunday morning in Balboa Park, I was intimidated, pursued, and attacked by the homeless people in our Park.”

“You’ve done it again, and you keep doing nothing.”

Since organisations have shown that homelessness in the city has increased dramatically over the last few months to levels never previously seen, the former Trail Blazer’s centre is now venting his concerns on Instagram.

On August 24, Walton reportedly sent the awakened mayor his first email, asking: “You peak of the rights of the [homeless], what about our rights?”

We abide by the laws that govern a civilised society; why are others permitted to flout them?

He proceeded by saying that the behaviour of the homeless people and the mayor’s inaction were both unacceptable.

Voice of San Diego reports that Walton subsequently wrote the email describing the assault while on his bicycle before writing a last email to Gloria on September 2 in which he said, “You have failed us and yourself.”

The sports broadcaster recently vented his emotions on Instagram.

He wrote: “Will San Diego Mayor @ToddGloria please give us our park, our bike routes, our neighbourhood, our community, and our life back,” along with a picture of homeless people camping out in a park.

He said that “the homeless issue is growing worse instead of better and that it costs more to keep them on the street than to get them off.”

On Monday, Walton posted a second image of tents set up on a patch of grass with the caption: “Unfortunately, and with a heavy heart, I can no longer declare that my hometown of San Diego is the best location in the world.”

“I can no longer encourage my family, friends, visitors, and companies to come to SD to live, work, and play; SD is no longer a safe, healthy, clean, and beautiful location.

I am heartbroken because I can no longer claim that our neighbourhood of the last 43 years is still my fantasy.

‘Mayor @ToddGloria, address the homelessness epidemic and allow us back our lives. Clean up our city.

Walton, a progressive who is renowned for supporting San Diego at numerous events and even backed Gloria when he initially ran in 2016, has made a sudden U-turn as a result of the statements.

The San Diego Downtown Partnership recently reported that its monthly census of homeless inhabitants hit an all-time high of more than 1,600 persons in August. However, the homeless problem has increased throughout the city since that time.

It claimed that more than 450 encampments had been set up simultaneously all around the city.

According to a July investigation by KUSI, the frequency of fatalities among the homeless community has also surged recently.

Following that incident, Gloria was seen on camera dismissing scores of homeless individuals on July 21 as she delivered a statement to open Comic-Con.

Even homeless rights activists now claim that the situation has gotten out of hand.

Now, he said, “I find myself offering beverages to homeless folks who are simply passing by in the parking lot when I go to a shop.”

And I’ve never met this many brand-new acquaintances. It occurs daily.

He continued by saying that he believed the problem was caused by the fact that more individuals are unable to purchase a property due to historically high inflation rates.

Gloria’s office said that although it is aware of the issue, its options are constrained.

The mayor’s director of communications, Rachel Liang, stated in a statement to Voice of San Diego that “Bill’s displeasure about our homelessness situation is felt by individuals across our city, including the mayor himself, and in places around the United States.”

She continued by saying that it is a challenging problem to address and that the COVID epidemic has only made things worse.

People living on the streets since the epidemic seem to be in worse shape than before, with more behavioural health and drug addiction difficulties than we have seen before, as Voice of San Diego has reported.

“Our crews are finding an increase in hording behaviours and anti-social behaviour, such as vandalism and a refusal to put trash in nearby receptacles,” the statement reads. “This is part of our efforts to address the neighbourhood impacts of homelessness, particularly encampments and the trash and unsanitary conditions that result from them.”

However, Liang said that the city does not have the authority to dismantle every camp.

Yet, she said, municipal authorities are taking every legal action possible to increase shelter and homeless programmes in addition to cleaning up the camps.

In order to free up social workers who may assist individuals in finding homes, the city is now planning to send out a team of professionals to deal with the most disruptive street dwellers, according to Voice of San Diego.

Gloria recently took a flight to San Jose to support California Governor Gavin Newsom as he signed a legislation establishing CARE Courts, which would let law enforcement and family members compel individuals to get treatment.

At the time, Gloria issued the following statement: “Today is the day when local governments, including the City and County of San Diego, stand together with the state to declare we no longer turn a blind eye to Californians suffering from mental illness.”

Instead, “we will take action and ensure services to those who need them.”