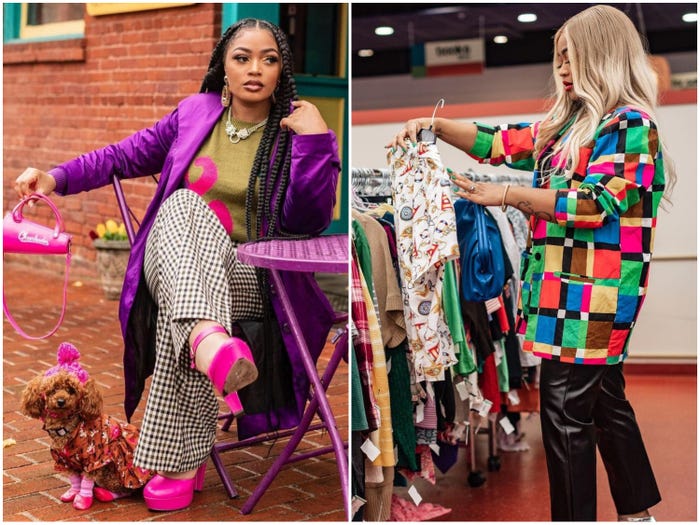 Iesha Gilchrist was watching the 2020 presidential inauguration on television when she saw First Lady Michelle Obama’s burgundy pantsuit. Before the ceremony had even ended, she went to a charity shop to copy the outfit.

She chuckled to herself, “Girl, you didn’t see the inauguration because you were in Goodwill looking for her dress.”

But, as Gilchrist told Insider, it was worthwhile. Her $20 secondhand outfit, which included a jacket, gloves, a sparkly belt buckle, and a red purse, had over 271,000 views and 53,800 likes on TikTok.

But for Gilchrist, it was just another workday.

The online content producer goes by the moniker “The Beyoncé of thrift,” which she created herself to help her stand out among the expanding number of thrifting and vintage clothes accounts on social media.

Gilchrist believes that because Beyoncé is the finest at what she does, she should be imitated.

The Instagram account Thrift N’ Tell, which the 31-year-old resident of Virginia Beach founded in 2019, is devoted to styling secondhand clothing.

She also does webinars on content production under the brand, resells used items on her website and Instagram Live, and offers assistance to other women running resale companies.

The community she has developed on the site turns to her for advice on repurposing thrifted apparel, celebrity outfit recreations on a budget, and style inspiration.

She explained to Insider how you, too, can expand your wardrobe responsibly with used clothing you’ll really use.

Play around with a small selection of clothing first.

Gilchrist told Insider, “I think thrifting is a simple method to experiment with your style until you find out what it is. In this manner, you may avoid spending tens of thousands of dollars on clothing that could or might not fit you.

Gilchrist claims that when it comes to her own clothes, she stuffs her closet with things that go with her eclectic, modern-glam aesthetic.

However, she acknowledges that not everyone is aware of their own style, so she advises beginning with a straightforward assortment of clothing, such as all-black ensembles, monochrome looks, and classic items.

People who still believe that purchasing old clothing is “disgusting” or “filthy,” according to Gilchrist, would change their minds if they visited one of the numerous spotless, well-kept thrift shops in existence.

The content creator advised those who have never thrifted before to start at a brick-and-mortar shop, even if it means travelling a bit farther to discover high-quality items.

She said, “I think people in smaller towns keep the things longer. “Those little places have the vintage we’re searching for.

Gilchrist advises using both your hands and your eyes while you’re inside to shop. She hunts around for fabrics like silk, wool, and linen, and searches for tags that say an item was created in the US.

Additionally, she advises not to restrict yourself and to browse every rack, regardless of the gender it is designated for.

Gilchrist told Insider that she hopes people will continue to shop at secondhand stores, particularly the rising number of Gen Z shoppers who do it online.

“Clothes are still produced in such large quantities. Who is wearing this attire? Where is this all leading? I’m not sure,” she said.

“I hope thrifting is more than just a fad. I hope that becomes the standard,” Gilchrist remarked.