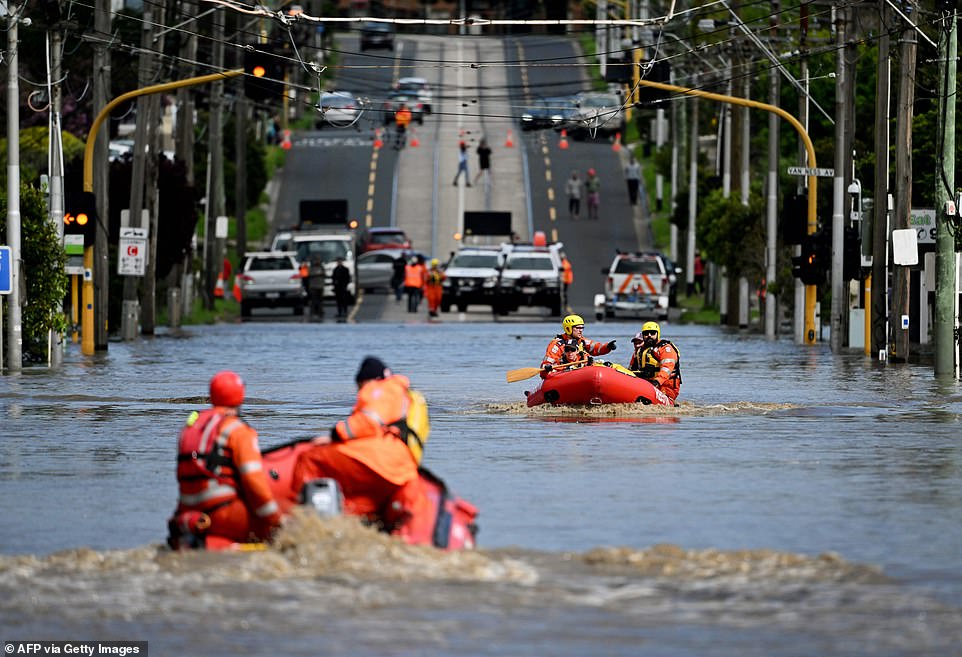 After flash floods struck Melbourne, Australia’s second-largest city, thousands of residents were forced to leave their homes despite fears that the weekend might bring even worse conditions.

According to state premier Daniel Andrews, 500 houses in the Maribyrnong area had to be evacuated over night, while another 500 are cut off from emergency services and are surrounded by water.

It follows a severe rainstorm that battered huge portions of Victoria state, where Melbourne is situated, and dropped a month’s worth of rain over two days. Tasmania, an island nation off the coast of Victoria, as well as neighboring New South Wales were impacted.

Despite the fact that the storm is now past, flooding is expected to worsen throughout the weekend as water rushes into already saturated waterways.

The Gouldburn River, which runs through the heart of Shepparton and is around 100 kilometres north of Melbourne, is expected to reach record levels during the next several days, endangering 4,000 houses.

‘This is going to establish new records in terms of property damage, road, public infrastructure, and the sheer amount of water,’ Mr. Andrews said at a press conference.

The decision to restore the state’s COVID-19 quarantine facility, which was shut down last week when Australia relaxed its isolation policies, to provide housing for flood-affected citizens, will be determined on Saturday, according to Andrews.

According to Prime Minister Anthony Albanese, the federal government was prepared to help the states affected by the floods.

He was cited as stating, “This is a tough moment, my heart goes out to the people impacted at this time,” by local media. “There are already ADF (Australian Defence Force) soldiers on the field in Victoria.”

She told AFP that the water was now waist-high or higher and covering the home oval. It’s a little worrisome where I live; it’s the same suburb. Fortunately, our house is a little higher up, but many homes along the river are affected.

500 houses in Victoria had been “inundated,” according to state premier Daniel Andrews, while another 500 residences were encircled by floodwaters and shut off from help.

He predicted on Friday that “that number will probably climb.”

Betty Ristevesky, a resident of Maribyrnong, described the scenario as uncomfortable. She told AFP, “It’s becoming a little nerve-wracking now.” We can see the sea ahead of us as it approaches.

The state emergency agency said that while the brunt of the storm had gone by late Friday morning, the floods will worsen as water poured downstream into overflowing river catchments.

According to emergency services spokesperson Tim Wiebusch, “there aren’t many regions of Victoria that aren’t facing substantial floods over the next days.”

According to emergency management commissioner Andrew Crisp, the Australian army has been sent to assist locals in sandbagging their homes.

He said, “This is a serious emergency for the state of Victoria.”

Social media videos showed individuals walking through knee-deep water with their animals, and others were being rescued in boats, while local media said that 200 stud horses in the remote Victorian town of Mangalore were in danger of being carried away.

Everybody is asking themselves, “How is this really happening?” Matt Iozzi, a resident of the Maribyrnong area who had to leave early on Friday, told the Australian Broadcasting Corporation.

“I talked to a few neighbors, and everyone was on their way out or intending to leave in the next 30 minutes after witnessing how quickly the water was rising,” one neighbor said.

A possible dam break in the area forced around 1,000 people of Wedderburn, a tiny village 200 kilometers (125 miles) north of Melbourne, to leave immediately.

The biggest gold mine in Victoria, Fosterville, owned by Agnico Eagle, halted all non-essential activities, according to the business. According to a spokeswoman, it can take many days before full operations are resumed.

While hundreds of people in southern New South Wales spent the night in evacuation centers, the flooding issue in Tasmania became worse on Friday with the issuance of new evacuation orders.

By Friday afternoon, the rain had stopped, but the meteorological service had issued a warning about another possible extreme weather system for the next week.

On Friday, northern Tasmania, an island state south of Victoria, was also prepared for significant flooding.

Orders for widespread evacuation were issued, and 120 routes had to be closed due to excessive rain.

Floodwaters pose a danger to lives, according to a statement from Tasmania’s state emergency agency.

An evacuation center was established in New South Wales, the state with the highest population in Australia, after heavy rains on Thursday evening in Forbes, an interior town five hours’ drive east of Sydney.

Due to consecutive La Nina episodes, Australia’s east coast has seen significant rainfall on many occasions during the previous two years.

More than 20 people lost their lives in the east coast flooding tragedy in March, which was brought on by powerful storms in Queensland and New South Wales.

When floods once again inundated the city’s outskirts in July, tens of thousands of Sydney residents were told to leave.

La Nina episodes are not caused by climate change, but experts think it may make floods more severe since warmer air has more moisture in it.