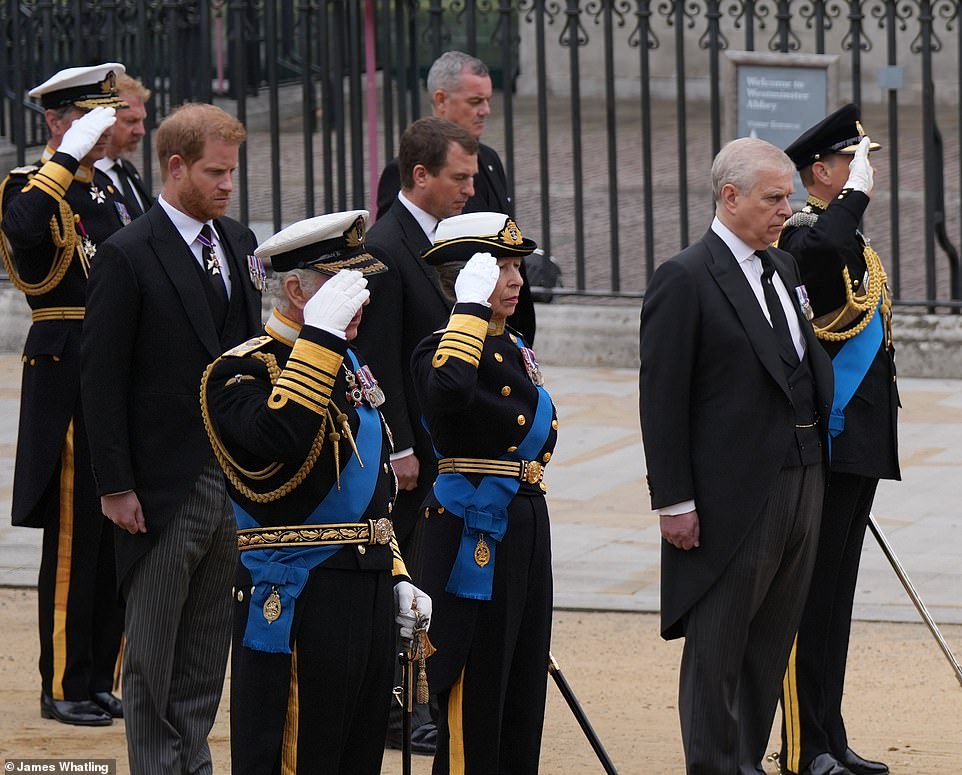 For a split second, the arguments about attire and the controversy over insignia seemed unimportant.

The vanity of Prince Andrew and Prince Harry was reduced to mere minutiae in Westminster Abbey, which has seen really historic moments in Britain.

There has been a feeling of hostilities being paused and sadness being shared in the days after the Queen’s passing. A potent reminder of the importance of familial connection in tying the monarchy to the country was also present in the large church where kings are crowned and buried.

Yesterday was more than simply the last day for the Elizabethan period; it marked the passing of the royal iconography from a mother to a son.

King Charles has a to-do list that is overflowing with difficult tasks, such as stabilizing the Commonwealth and keeping the splintered United Kingdom together. But resolving a family conflict that tore his mother apart in her last years will be his first challenge and one that might define his reign.

It makes sense why, at moments yesterday, his face seemed so dejected that not even his loving wife, the Queen Consort, could make him feel better. He is aware that, despite what some people may think, being the head of state does not give him a natural claim to the title of most adored member of the Royal Family.

But he is also aware that the artificial celebrity Prince Harry and Meghan, who reside in California and have a sizable social media following, represent is harmful to the monarchy’s long-term health. It seems to be supported by an exaggerated feeling of victimization.

Charles hopes that his son would finally understand that the traits of responsibility and devotion highlighted in the nation’s outpouring of sincere adoration for the Queen are the genuine measure of popularity after being such an integral part of the magnificent events of the previous week and a half.

It can be a hopeless dream.

Harry hasn’t learned this lesson, as seen by his willingness to let it be known that having the Queen’s initials removed from his Army uniform after he held vigil on Saturday night over his grandmother’s coffin. It seems that he still does not fully understand the repercussions of leaving royal life.

He was denied the opportunity to wear the uniform that meant so much to him at the burial and other significant ceremonies because of his choice to give it up.

His face was sternly fixated on some distant place at both Windsor and the Abbey, a picture of concentration. But if there was ever a need for a reminder of the life he had given up and the potential role he might play in it, it was all around him.

The sad and sorrowful spectacle could not have failed to impact him. Neither did they explain how they lent resonance to and significance to contemporary royal customs.

In addition to grieving the passing of his grandmother, Harry also turned to her in his distress when his royal life began to fall apart yesterday. Without a doubt, the monarch and his grandson enjoyed a strong relationship. The Queen’s servants have described to me how she eagerly answered Harry’s phone calls in the early stages of his exile in America. This changed with time, and she eventually found Harry’s criticisms to be confusing.

Other senior royals found his route-one method to be infuriating, but he wasn’t the only one to use it. Prince Andrew trusted his mother for his salvation as well.

Despite being stripped of his military connections and patronage and forced to resign from his royal responsibilities, he remained close to the Queen, even taking her to the Abbey in March for the Prince Philip funeral ceremony.

There was unquestionably considerable popular sympathy for Andrew and Harry, the only two members of the Queen’s immediate family to have served in the military.

Both men had undoubtedly shown outstanding gallantry, Andrew as a helicopter pilot in the Falklands War and Harry on two separate instances in Afghanistan.

While their heroism has never been questioned, their common sense and judgment have.

Charles has experienced both fury and despair as he has dealt with the consequences. Charles thought Andrew’s choice to talk to the BBC about the Jeffrey Epstein scandal was a tremendous act of self damage and stupidity since he made no admission of guilt or remorse.

Harry’s ongoing practice of giving interviews and his intended book have caused him considerable personal harm.

Meghan had been welcomed into the family by Charles, who is renowned for escorting Meghan down the aisle at the royal wedding when her own father was unable to make it.

But their criticisms of the family’s racism and their disparaging remarks about the moral character of the Royal Household have hurt him.

It will be for King Charles’ Coronation that the Royal Family next congregates on such a ceremonial scale as we have seen over the last few days. So, where and in what capacity will Harry and Meghan appear? And what more can Andrew hope for but a spectator role?

Unless Harry is willing to take the olive branch provided so generously by his father, he is in risk of being written out of the royal tale, as shown by the magnificent events of the Queen’s obsequies.

He must be thinking about how his brother William has advocated for peace by accompanying him to all the significant occasions, from the lying-in-state to the burial, by marching or standing by his side. He could so simply win back the family’s affection.

The British people have recently experienced a reawakening of a feeling of continuity with their nation and way of life, not only a sense of the past. For many of us, finding a means to take pride in our nation has been challenging.

The events of yesterday, which had a strong resemblance to old religion, heraldry, and tradition, weren’t simply about the survival of the royal family. They dealt with the survival of a country and its people. Harry may probably play a part in that continuity, even if Charles is unquestionably the center of those affections. It’s conceivable that all he has seen has given him a new perspective on what his future may hold.

In contrast to his mother’s lack of grandeur and her humility and modesty, Prince Andrew has clung to every royal prerogative, thus there can be no royal future for him. He does not, however, have to be exiled from his brother’s realm.

Years ago, when in the midst of another incident, Charles sadly said of his brother Andrew that what he truly wanted was “to be me.” He advised his mother that maybe the younger prince, who had been the heir apparent to the kingdom for many years, should work for him.

Could there not be a position where a devout Andrew could make atonement under Charles’ favor as King?

If he accepted it, he would definitely get his brother’s eternal appreciation.