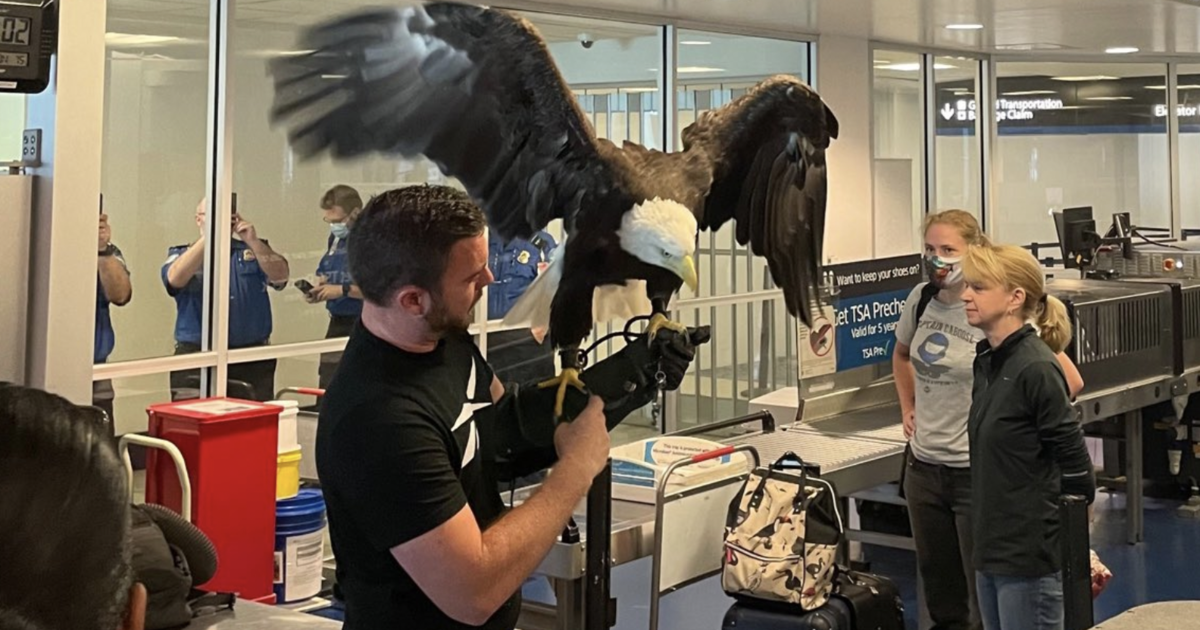 This week, a bald eagle astonished other passengers by flying through a TSA checkpoint at Charlotte Douglas International Airport.

According to a tweet from TSA Southeast on Thursday, Clark the eagle, who resides at the World Bird Sanctuary, “decided to give his wings a rest and fly commercial.” TSA was able to screen the eagle and his handler after receiving notification from the airline that was transporting Clark.

Clark the Eagle from the World Bird Sanctuary joined us as a special guest and opted to fly commercially to rest his wings. We screened him and his handler after his airline contacted us to do so. Clark has been taught to expand his wings, and he even did so a little bit during the audition. (2/2) pic.twitter.com/SMkQAo65aQ

The TSA said that Clark “is taught to flap his wings” and even displayed them a little bit during inspection.

In one of the videos of Clark, he could be seen fluttering his wings as he waited with his handler to go through security.

A man is at this area at CLT Douglas taking a bald eagle through TSA pic.twitter.com/zQm0Mlt620

When the World Bird Sanctuary in Missouri began raising the then-endangered bald eagles for reintroduction into the wild in 2002, Clark was born there. Although Clark’s brothers had been let free, he had been born with scale abnormalities on his feet, which rendered him susceptible to frostbite or losing toes during the winter. He could not be discharged as a result.

Instead, the group claims that Clark started his flying training at an early age and is now a representative of the refuge. He flies for his job at various sites and events around the country, such as Chicago Bears and St. Louis Cardinals games.

Experts were pleasantly delighted to see that American bald eagles, which were once in danger of becoming extinct, had seen a fourfold increase in population since 2009. According to the U.S. Fish and Wildlife Service, there were only 417 documented bald eagle nesting pairs in the lower 48 states in 1963. However, the cherished national emblem of the United States is now flourishing, with more than 71,400 nesting pairs.

The population size of bald eagles is, however, endangered by lead poisoning, according to another research published this year.

Even though the population seems to have recovered, a disturbance may occur that would lead eagle populations to decrease once again, according to Krysten Schuler, senior author of the study and assistant research professor at Cornell University’s Department of Public and Ecosystem Health.