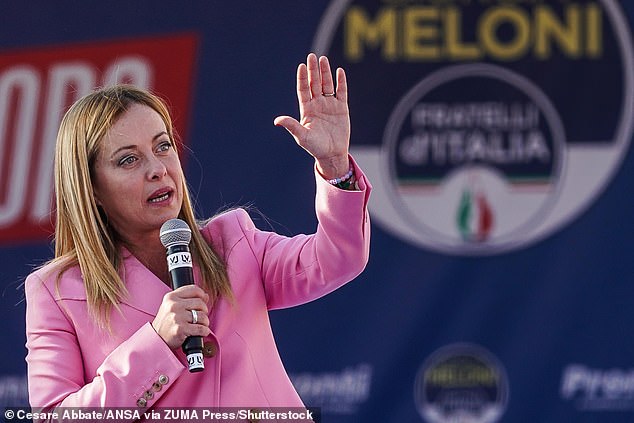 Following tomorrow’s election, Italy is expecting a political earthquake as the most right-wing administration seen since World War Two is predicted to take office.

The possibility of an Italian far-right administration has the European Union on high alert for disruptions amid worries for the stability of the conflict in Ukraine.

Giorgia Meloni, the head of the post-fascist Brothers of Italy Party, is expected to come out on top in Sunday’s election and become Italy’s first female prime minister.

If she wins, Silvio Berlusconi of the center-right, who has gained support from younger voters thanks to TikTok, and Matteo Salvini of the far-right League are poised to form a government with her.

The government is now dealing with a variety of difficulties, including a severe debt problem, growing inflation, and an energy crisis related to the conflict in Ukraine.

The party, whose ‘Italians First’ platform has made it popular, has raised doubts in Brussels.

The campaign, which was started by the resignation of former prime minister Mario Draghi in July, came to an end on Friday, giving Italians a day off from election-related activities before the vote.

Draghi was well-liked by the EU elite and respected on the global stage.

Just months before the Scandinavian nation is scheduled to assume the rotating EU presidency, a triumph by Meloni and Salvini would come quickly on the heels of an election in Sweden where the vehemently anti-immigration and Eurosceptic Sweden Democrats formed a governing coalition.

The nation is ready for a change, a fresh face, according to Wolfango Piccoli of the London-based political risk consultancy Teneo, who spoke to AFP.

Officials in Brussels, though, indicated they would not draw hasty judgments about Italy and warily clung to the guarantees given by significant right-wing figures before to the referendum.

Didier Reynders, a veteran of EU politics, stated, “This is not the first time that we risk encountering governments created with far-right or far-left parties.”

Let people choose their elected officials, he said. With the tools at our disposal, we will respond to the incoming government’s actions.

Ursula von der Leyen, the chair of the Commission, repeated it and cautioned that Brussels has “weapons” to deal with disobedient member states.

“My perspective is that we are working together,” she stated, “with any democratic administration prepared to engage with us.”

Italy is waiting for roughly 200 billion euros in EU cash and loans as part of the nation’s hefty share of the bloc’s coronavirus recovery stimulus plan as election day approaches.

The government must fulfil a lengthy list of promises to reform and reduce expenditure that were made by past governments in order to be eligible for each instalment.

The Jacques Delors institute head, Sebastien Maillard, stated: “To go without the billions from the recovery plan would be suicidal.”

We will give them the benefit of the doubt, said an EU official who works closely with Italy on economic matters.

“We will evaluate them based on their plan, including the finance minister.” People whose names are listed are well-known to us in Brussels.

However, worries have been expressed about how the election would affect the continuing conflict between Russia and Ukraine.

Many worry that Viktor Orban, the prime minister of Hungary, may quickly find an ally in Italy in his effort to soften sanctions on Russian President Vladimir Putin.

Salvini, a longstanding ally of the Kremlin, has vowed not to attempt to reverse the EU sanctions.

But many think his administration will make it harder in the next months.

According to Fabian Zuleeg, CEO of the European Policy Centre, “what we are facing in the next months is going to be extremely challenging and very much challenge European unity,” whether it be a war or skyrocketing inflation.

He noted that the expected outcome of the Italian election “is not going to assist in making some of these hard choices.”

They support the euro on certain days and oppose it on others. One day they’ll change our opinions, one day they’ll embrace Russia, she said on French radio.

We have functional European institutions. We’ll collaborate. However, that is troubling, she continued.

People in Rome said last night that they were unclear of the election’s outcome but that the most recent polls indicated that the Brothers of Italy party was likely to win and establish a government.

Maria Tasca, a 27-year-old Sicilian, expressed her concern about Giorgia Meloni and the right-wing winning the election.

I believe that things have gone backwards by at least 50 years based on what she has stated about women’s rights, the rights of children, and rights in general.

The business owner, who identified himself only as Dante and was 75 years old, said: “There is no quick fix for the issues; they are global in scope.” However, sometimes you have to adapt.

Meloni, 45, has put a lot of effort into convincing nervous investors and a worried Brussels that her party’s previous links to followers of dictator Benito Mussolini are history.

She has toned down her remarks and uploaded a video of herself creating authentic Puglian pastries on TikTok.

At the last gathering for the right-wing coalition, which joins her Brothers of Italy with Salvini’s anti-immigration League party and billionaire Silvio Berlusconi’s Forza Italia, she channelled the warrior Aragorn from Tolkien’s Lord of the Rings.

A seamless transition from the dream monarch to the left’s responsibility for the nation’s “drug dealers, thieves, rapists, and mafia” was made by the self-described “Christian mother,” who concluded by saying, “This Italy stops on Sunday.”

85-year-old Berlusconi was at her side. The media magnate has mostly run his campaign online, courting grandparents and housewives with offers of stay-at-home wages while he is on trial for allegedly paying celebrities not to testify about his reportedly sexy parties.

Salvini, a 49-year-old former interior minister, drew criticism from the Catholic Church for his election campaign, which used the slogan “Credo” (I think).

Salvini has made an effort to distinguish apart by calling for an end to the sanctions on Russia and ranting against Brussels because of fear of losing a big portion of his followers to Meloni.

However, a video footage showing him on Thursday referring to a blind League candidate as “an eye for Italians” cast a shadow over the conclusion of his campaign.

Enrico Letta, the leader of the Democratic Party (PD) on the centre-left, arrived at his last rally in an electric van to remind supporters of his prior efforts to promote environmentally friendly transportation after his electric campaign bus ran out of battery power.

Giuseppe Conte, the leader of the populist Five Star Movement, seemed to have greater staying power than him as his major left-leaning opponent.

The media called him the “travelling Madonna” since he was often seen standing head and shoulders above a throng of fans.

»After tomorrow’s election, Italy expects the most right-wing government since World War II«