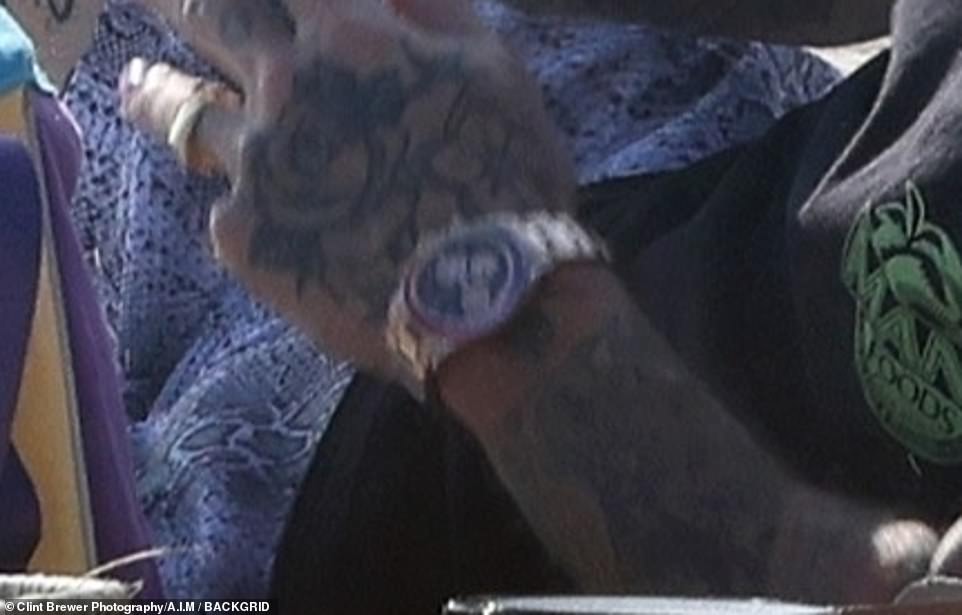 Along with his wife, Behati Prinsloo, Adam Levine, the lead singer of the band Maroon 5, was recently photographed on the beach in Southern California wearing a $430,000 watch.

On Butterfly Beach’s smooth sands, the singer looked to be wearing the very rare Rolex “Daytona Cosmograph rainbow” while their kids had surfing lessons.

Levine, 43, seemed to curl up on a towel in a sweatshirt while Prinsloo, 34, who is presently expecting the couple’s third child, took care of their other two children.

Just weeks after many women accused the singer of improper conduct, the pair looked to be deeply in love as they embraced on the beach.

Levine at one point lay on his side with Prinsloo nearby, using him as a crutch while she looked to go through her phone. The duo seemed to be quite at ease.

Levine watched as she seemed to be grinning at whatever it was she was focusing on.

Gio Grace, four, and Dusty Rose, six, seemed to be enjoying the weekend weather, which was in the low seventies.

The picnic blankets that were set out on the dunes had multiple cardboard cupholders, indicating that the family had brought lots of drinks with them.

In a plastic cup with a straw, Prinsloo and at least one of her daughters were spotted sipping green juice smoothies.

Prinsloo, who was sporting a black hoodie by Rage Against The Machine, seemed to be getting into the spirit of things as she was spotted using a pink and purple plastic shovel to assist in digging a hole in the sand.

Later, when the party made their way back up to the parking lot, it was possible to see Levine, who is covered from head to toe in tattoos, holding the family beach bag.

When the pair arrived, another beachgoer assisted in pumping up one of the tricycles they were riding.

When his supermodel wife seemed to be concentrating on her daughters and stood up to get some water from the adjacent Pacific Ocean to aid with sandcastle construction, Levine appeared to be deep in thought as he glanced at his own phone at other times.

Prinsloo grabbed a turquoise sweatshirt for one of her daughters to wear when the wind kicked up before settling down once again close to her husband of eight years.

The family sometimes may be seen pointing objects on the warm beaches and gazing out to sea. At one point, Prinsloo got to her feet and raised her black sweater to show off her growing baby bump.

The father of two said last month that he had texted model Sumner Stroh, 23, in a flirtatious manner.

When Sumner posted private communications between herself and the musician on TikTok, she startled the internet.

In the excerpt, Stroh said that she felt “manipulated” by the pop artist because of the amorous messages and proposals of face-to-face encounters in the video.

In essence, I was having a relationship with a husband of a Victoria’s Secret model. I felt used at the time because I was young, ignorant, and vulnerable, she added.

I was absolutely extremely easily misled since I wasn’t part of “the scene” as I am now.

Stroh also said that Levine had suggested that his relationship with Prinsloo was difficult, but that once the supermodel revealed she was expecting their third child, it seemed the two were more stable than she had been lead to think.

Levine apparently informed his claimed mistress that he may want to name the kid after her when the pregnancy was revealed.

After the disclosures, Levine released a post addressing the infidelity allegations, acknowledging that his sexts and other texts had “stepped the line.”

The artist said, “I exercised bad judgment in conversing with anybody other than my wife in ANY type of flirty way.”

“I didn’t have an affair, but I did cross the line at a regretful time in my life,” the speaker said. It became unsuitable in several circumstances. I’ve spoken about it and done something about it with my family.

My wife and family are everything to me in this life, he continued. The worst mistake I could have ever made was to be this naive and ignorant as to jeopardize the one thing that actually matters to me. I won’t succeed again.

Five women in all have come forward to say that the married artist sent them sexually suggestive Direct Messages on social media.

Ashley Russell, 21, who has just over 4,100 followers on Instagram and operates a fitness and workout account, claims that the singer started checking her Instagram stories in March before like her pictures and DM-ing her.

The senior at Auburn University who is a fitness enthusiast said to DailyMail.com that the 43-year-old began responding to pictures of her exercising, especially those that displayed her toned legs and glutes, but that she would almost immediately delete his messages once she had viewed them.

The pleasant discussions, according to her, were practically daily but eventually ceased after she forewarned the father of two that he would be exposed for flirting with women online.

Russell, who likened herself to the Hollywood star as a “random lady in college,” acknowledged that she found it “strange” that Levine would start a discussion with her but said she felt obliged to do it in order to see how far he would go.

Almost every day at approximately 10 p.m. my time, he would message. Every time I uploaded an article, which was every day, I would check to see whether he had watched it, Russell said.

He would often respond with a comment about a leg or booty day at the gym. He preferred booty tales.

He said that he discovered me on his Instagram Discover Page since I had a fitness account and he is “huge into fitness.” I wanted to keep going even though I knew it was strange to see if it grew weirder. He stopped contacting me after I warned him he would be found DMing ladies like me.

Levine’s former yoga instructor claims he sent her a lewd message. She became the fourth woman to publicly make shocking allegations against the Maroon 5 singer.

Alanna Zabel, who worked with the pop artist from 2007 to 2010, claims he boasted to his friends that she had “the greatest a** in town and it was adorable” and claimed he wanted “to spend the day with you nude.”

She described how her ex-boyfriend, who was at the time, allegedly turned aggressive after reading the letter, broke into a jealous frenzy, and snapped her wrist.

When she informed Levine what had transpired, the yogi claimed that he had cut her off of his future tour and accused him of abandoning her.

Zabel’s accusations come after those of two other women who said they received offensive communications, and one other who claimed an affair.

Shortly after Los Angeles-based model Sumner Stroh stated she had a covert connection with the singer last year, the comedian Maryka and a lady by the name of Alyson Rose uploaded photos of their purported Instagram discussions with Levine.

Some of the interactions seem to contain timestamps from July of this year, which would have been when Levine would have celebrated his seventh wedding anniversary with his wife, even if the messages’ context is unclear.

Before being married to Prinsloo in 2014, Levine was nearly as well-known for his long list of model girlfriends as he is for his music and sex appeal.

Prior to being married to Prinsloo in a dreamy wedding in Cabo San Lucas in July 2014, Levine had a dating history that includes Victoria’s Secret models Nina Agdal and Anne Vyalitsana, as well as an alleged affair with Jessica Simpson.

The pair looked to have one of the strongest marriages in entertainment until Sumner’s allegations, but cracks have been showing in recent weeks.

The couple’s 10-bedroom, 14-bathroom mansion in Pacific Palisades, California, valued at $51 million was sold in May.

In a recently discovered interview from five years before to his marriage to Prinsloo, Levine previously said he doesn’t believe monogamy is natural.

Five years before he married Prinsloo, in a 2009 interview with Cosmopolitan, he was asked, “Why do males cheat?” “Instinctively, monogamy is not in our genetic constitution,” he retorted.

“People lie. I lied to you. And what about that? Nothing is worse than the experience of doing it.

Levine, who is reportedly worth $150 million, previously embraced his reputation as an A-list rake. He even admitted in a 2012 interview that he had enjoyed a “promiscuous” phase and attributed his desire to have so many sex relationships to the fact that he “loved them so much.”