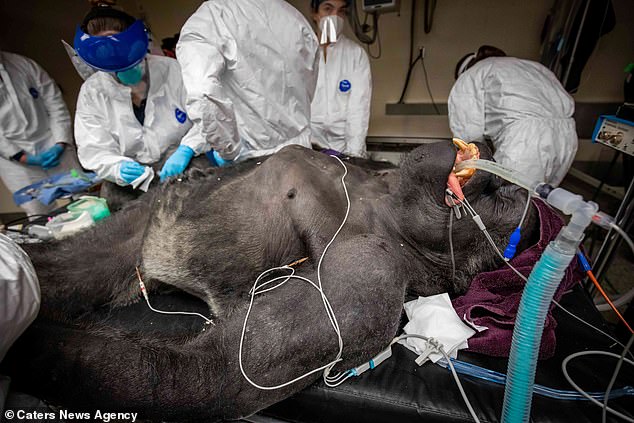 Koga, a 400-pound silverback, was put to sleep at this very time for his yearly health MOT, during which courageous veterinarians examined his heart, eyes, teeth, and muscles.

A health MOT is performed on Koga, a 34-year-old western lowland gorilla, every two years to make sure his health is in excellent shape.

Christan Dobosiewicz, 30, who has been photographing Koga since he arrived at The Buffalo Zoo in New York in 2007, was the photographer.

Under the close supervision of the vast staff making sure everything worked properly, Koga’s examination went well.

The large, potentially deadly “father figure” gorilla is content and in good condition.

Koga is a wonderful father to the other gorillas at our zoo, according to Christian. He has an aggressive demeanour, but it is part of his protective job.

“He is particularly excellent with keepers, he reacts well to training, and he is constantly playing with the youngsters behind the scenes.”

He has a medical test every few years to ensure his health and wellbeing.

They then examine the rest of his body, including his teeth, eyes, joints, and muscles, as well as his heart to search for heart disease, which may be frequent in these animals.

It requires a large staff to make sure everything runs properly since it’s a major procedure. It might be stressful at first since he is a massive and potentially deadly animal, but our crew is fantastic.

He weighs over 400 pounds, making him an extremely strong creature.

“The crew is professional and proactive.” Since I am aware of how excellent they are at what they do, being in the same room with them never causes me any anxiety.

The size of his hands and fingers is astounding. It helps me put things into perspective when I place my hands up against his.

It’s amazing to see how strong and powerful he is, as well as how near he was to such a fascinating animal.

“The examination passed without a hitch, and Koga is as happy and healthy as ever.”