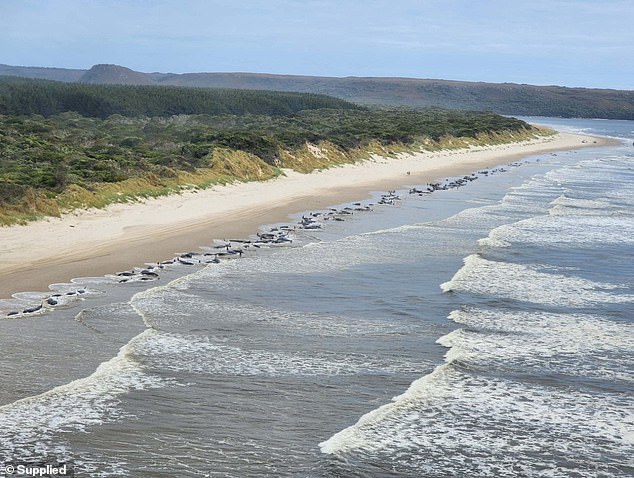 Wildlife specialists and Tasmanian police are travelling to the scene to look into the huge stranding and try to save the whales that are still alive.

According to a statement sent to Daily Mail Australia by the Department of Natural Resources and Environment Tasmania, almost half of the whales that have washed ashore are still alive.

The stranded whales, which are pilot whales, are thought to have originated from the same pod.

The creatures, which resemble pilot whales, have abandoned themselves on Ocean Beach. According to NRE Tas, some animals are stuck on a sand flat within Macquarie Harbour.

The agency has verified that a Marine Conservation Program crew equipped with whale rescue equipment is on its way to the region.

They will collaborate with Tasmanian Police and Tasmania Parks and Wildlife Service officials.

The statement stated, “Marine wildlife specialists will analyse the location and the situation to formulate a proper reaction.”

The government noted that since Australia’s greatest stranding in 2020 at the same region, which resulted in at least 380 whale deaths, their handbook for such an emergency had been revised.

Since the large stranding in 2020, the department’s comprehensive Cetacean Incident Manual has undergone considerable evaluation and serves as a manual for stranding responses.

“Stranding reaction is complicated in this region. A request will be made via numerous channels if it is assessed that the general public needs assistance,’ they stated.

Only two days before the major stranding, 14 sperm whales perished after washing up on King Island, which is located off the north-west coast of Tasmania.

All of those juvenile male whales were found on Monday in the late afternoon at a nearby fishing location.

Wildlife researchers and a veterinarian are still looking into what caused the pod to get stuck; hypotheses range from higher temperatures to nearby seismic activity.

Two years have passed since the greatest mass whale stranding in Australia, which also happened close to Macquarie Harbour in Tasmania.

As rescuers fought to save the few pilot whales that were still living at the time, more than 470 were stranded off the shore.

At least 380 whales perished out of the 470 that washed ashore.

270 whales were discovered struggling in shallow water, which sparked the first search operation.

The rain and very low temperatures made it difficult for rescuers to work.

explanations on why sperm whales came ashore on Monday

“Have these animals ever been ill or been affected by anything?” stated Dr. Meynecke.

Additionally, “natural geomagnetic shifts may be occurring that may have an effect on these creatures.”

They will go to several locations in quest of various food supplies, he added.

When they do this, they may not be in the ideal physical condition since they may be famished; as a result, they may take more chances and maybe approach the beach.

What prompted the whales to migrate closer to the coast, according to wildlife biologist Vanessa Pirotta, is still a “total mystery.”

We really don’t understand why this occurs, she told the ABC.

Every time an occurrence of this kind occurs, it is the million-dollar question.

According to Dr. Pirotta, the party may have been following a single whale as it approached the coast, which might have resulted in a navigational mistake.

According to the Department of Natural Resources and Environment, sperm whale sightings in the vicinity of King Island, where this week’s initial stranding took place, are common.

According to a spokeswoman, sperm whale sightings in Tasmania are common, and the location where the whales have stranded is within of their typical range and habitat.

While further research has to be done, it’s probable that the whales belonged to the same bachelor pod, which is a collection of young male sperm whales that associate with one another after leaving the mother group.

Staff from the Parks and Wildlife Service are observing the situation.

Surfers and swimmers have also been advised to stay away from King Island’s west shore because the whale corpses there may attract sharks.

Dehydration is the main cause of beached whale deaths.

The creatures are covered in a very thick layer of blubber, which keeps them warm in deep-sea conditions but quickly overheats them near the surface.

Without water to support them, stranded whales may be crushed to death by their own weight or, if they are in deep water, they may drown if their blowholes are blocked.