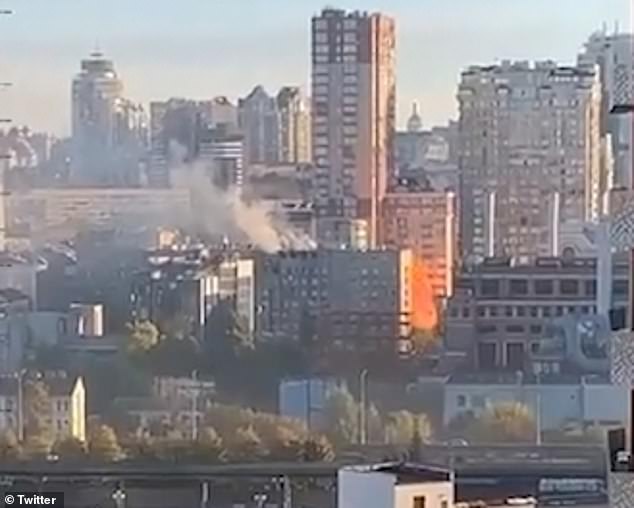 According to President Volodymyr Zelensky, 30% of Ukraine’s power plants have been damaged by Russian airstrikes in only one week, making the country’s energy situation “serious.”

Just one day after the city was pounded by a swarm of suicide drones, bombing assaults shook energy facilities in Kyiv and metropolitan areas throughout the nation this morning, triggering blackouts and affecting water supply.

Officials said that hospitals in Kyiv, Kharkiv in the east, Mykolaiv in the south, and the central areas of Dnipro and Zhytomyr were using backup generators when the attacks occurred early on Tuesday.

On Monday, drones pounded Kyiv, damaging a residential structure in the city’s center and killing five people in what the president called a desperate strike.

It was the second Monday in a row that Russia conducted retaliatory attacks, which according to military analysts seem to be Moscow’s reaction to casualties on the battlefield.

The frequent assaults on energy infrastructure were characterized by Zelensky as “another sort of Russian terrorist strikes.”

The Ukrainian president said on Twitter that “30% of Ukraine’s power stations have been damaged since October 10, creating major blackouts across the nation.”

According to him, the strike indicated that “no room was left for dialogue with the dictatorship of (President Vladimir) Putin.”

According to the mayor of Zhytomyr, which has a population of 230,000 and is situated 80 miles to the west of Kiev, there was no water or electricity available early on Monday.

Speaking overnight, President Zelensky said that Russia “doesn’t have any chance on the battlefield” and is attempting to make up for its military failures with terror.

He said on Telegram, “They keep terrorizing and killing citizens, which is what they do best.” “Such acts will not alter anything for the terrorist state,”

The Kremlin denied any knowledge of their usage on Tuesday, despite images of Iranian suicide drones targeting Ukrainian towns this week being widely available.

While power was restored to the southern city of Mykolaiv following nighttime strikes, several communities in the Zhytomyr area west of Kyiv and portions of the city of Dnipro were still without energy.

The city is now without access to water and power. Hospitals are working on backup power, according to a statement posted online by Zhytomyr’s mayor Sergiy Sukhomlyn.

In the meanwhile, the regional governor said that eight missiles struck Kharkiv, the second-largest city in Ukraine, which is located around 40 kilometers (25 miles) from the Russian border.

Igor Terekhov, the mayor of Kharkiv, said a “industrial company” had been attacked.

While this was going on, the DETK energy supplier in Kyiv said that its employees were “doing their utmost to restore electrical supplies” after the damage of a crucial piece of infrastructure in the city.

“Our areas rely on one another, thus the situation is grave right now throughout the nation… The whole nation must be ready for the possibility of losing heat, water, or power, Kyrylo Tymoshenko, the deputy director of the Ukrainian president’s office, said on Ukrainian television.

Following a series of humiliating retreats on the battlefield and an assault that struck the Crimea Bridge, a favorite project of Putin’s that symbolized his dominance, Russian attacks on civilian targets have increased significantly over the last ten days.

Moscow seems to be attempting to weaken the Ukrainian people’s will to continue the fight after failing to defeat Kyiv’s troops, perhaps in an effort to persuade Zelensky to accept a peace agreement that would benefit Russia.

According to Kyrylo Tymoshenko, a Ukrainian presidential adviser, two explosions shook an energy complex in the almost one million person city of Dnipro in the country’s southeast, inflicting significant damage.

According to a Reuters witness, a missile struck an apartment building in the southern Ukrainian port of Mykolaiv, killing at least one guy. In Kyiv, the country’s capital, explosions could be heard and smoke could be seen rising.

Additionally, there were rumours of power infrastructure being targeted in the bordering Russian city of Kharkiv, which had a pre-war population of 1.43 million.

A day after drone attacks on Kyiv and other places left at least four people dead, Ukrainian President Volodymyr Zelenskiy accused Russia of terrorizing and murdering citizens with the airstrikes.

“The occupiers are attacking Ukraine.” They continue to terrorize and murder citizens, which is what they do best, stated Zelenskiy on the messaging app Telegram.

“The terrorist state will not benefit from such attacks in any way.” It will only serve to further demonstrate its deadly and destructive nature, for which it will undoubtedly be held accountable.

On how many people had been killed in the strikes, there was no immediate word.

General Sergei Suvorikin was appointed by Russia earlier this month as the general commander of what Moscow refers to as its “special operation” in Ukraine. Suvorikin deployed in Syria and Chechnya, when Russian troops used a “scorched earth” strategy against their adversaries.

His appointment was followed by the largest wave of missile attacks on Ukraine since Moscow invaded on February 24. He was given the nickname “General Armageddon” by the Russian media because of his claimed severity.

After the United States issued a warning that it will hold Moscow responsible for any war crimes, Russia launched its most recent attacks on Tuesday.

A Reuters witness claimed to have heard three explosions in the early hours of Tuesday in the maritime city of Mykolaiv.

They said that a downtown building’s one wing had been entirely demolished by a missile, leaving a sizable crater in its wake. A man’s deceased corpse was discovered being extricated from the wreckage by a fire team.

“The adversary used S-300 missiles to damage a residential structure in Mykolaiv.” One passed away. Additionally, there was a walkout at the chestnut park’s flower market. I wonder what the terrorists from Russia were battling at these utterly tranquil locations. Zelenskiy remarked.

The Russian attacks occurred after Ukrainian troops made gains in the east and south and a bombing of a bridge connecting Crimea, which Russia invaded from Ukraine in 2014, to mainland Russia on October 8.

U.S. Karine Jean-Pierre, the press secretary for President Joe Biden, told reporters on Monday that the White House “strongly condemns” the missile attacks by Russia and referred to Putin’s “brutality.”

On February 24, in what he described as a “special operation,” Putin dispatched tens of thousands of soldiers into Ukraine to flush out what he termed dangerous nationalists.

Armed with weapons provided by the United States and its allies, who have also slapped broad sanctions on Russia in an attempt to push it to quit, Ukrainian soldiers have staged a resolute fight.