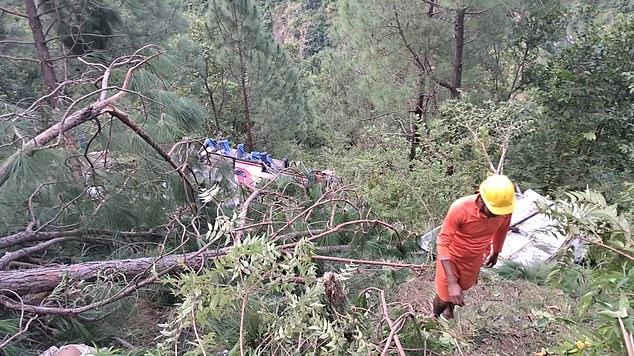 At least 25 wedding guests were killed when a bus driver in northern India lost control and drove into a deep gorge.

The car was going down a dangerous mountain road in Uttarakhand state when it went off a cliff and fell at least 1,640 feet. About 45 people were in the car.

Ashok Kumar, the head of police in the state, told AFP that it was amazing that 20 people were saved.

At least 25 wedding guests were killed when a bus driver in northern India drove off the road and into a deep gorge.

Prime Minister Narendra Modi said that the people who survived would get “all the help we can give.”

He tweeted on Wednesday, “At this sad time, my thoughts are with the families of the dead.”

In Uttarakhand, which is part of the Indian Himalayas and has many religious pilgrimage sites, it is common for people to die in car accidents.

Nearly two dozen people died in June when their bus fell into a gorge north of the state capital, Dehradun, on the way to a shrine for the Hindu goddess Yamuna.

The car was driving on a dangerous mountain road in the state of Uttarakhand when it went over a cliff.

A World Bank report from last year says that India is responsible for 11% of all road deaths, even though it only has 1% of the world’s vehicles.

The same report said that 150,000 people die in car accidents in India every year, which means that one person dies every four minutes.

It also said that road accidents cost the Indian economy about $75 billion every year, and that medical bills and lost income put many people who survive accidents into poverty.