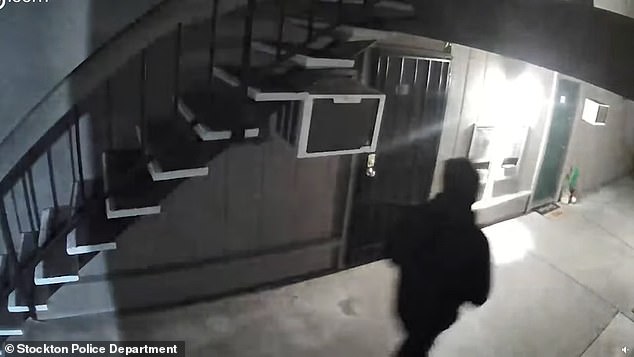 California police have published surveillance footage of a guy wearing an all-black COVID type mask, trousers, and a hooded jumper in connection with “six killings that may be the work of a serial killer on a mission.”

The surveillance video of a suspect wanted for questioning was made public by Stockton Police on Tuesday, along with a call-in number for anybody with information.

According to Stockton Police Chief Stanley McFadden, the crimes, which have put the city’s people on edge, have been connected by forensic ballistics evidence.

The murders happened between April 10 and September 27. Seven individuals were injured, but one was able to live.

We are unsure about the motivation. We do think it is mission-oriented, however. This individual has a goal,’ McFadden added.

The victim’s age varied from 21 to 54 years old, and there were both males and women among them, according to the chief.

With the exception of a 46-year-old lady who was shot in Oakland and was the lone survivor, all but one of them were assaulted in the Stockton region.

The Stockton Police Department revealed surveillance video that showed a guy McFadden called a “person of interest” walking through an apartment complex or hotel corridor from behind.

The individual shown in the video was not connected to the shootings, according to McFadden, but investigators still wanted to talk with him as part of their investigation.

He urged onlookers to notice the man’s “uneven walk” and strangely erect stance while viewing the video. $125,000 has been put up as a reward for information that results in an arrest.

More than 300,000 people call Stockton, a city in the central valley of California, 60 miles east of San Francisco.

Since July, five killings have been unearthed in Stockton; four of the victims were Hispanic, and their deaths have been connected.

The homicides all occurred in locations with little lighting, and the men were discovered alone and dead in the early morning hours. Homeless people were among the casualties.

According to the police, there is “physical evidence” linking the five murders.

The subsequent wave of killings was also connected to two early morning shootings from 2021.

Police Chief Stanley McFadden said on Friday that after ruling out gang violence and robbery, the agency needs the public’s assistance in bringing fresh facts to light.

According to his relatives, Paul Alexander Yaw was the first person to pass away on July 8. After being shot in the early hours of the morning, he was rushed to the hospital, but he passed away from his wounds there.

Of the five victims, Yaw was the only non-Hispanic person.

He was many people’s beloved son, father, grandchild, nephew, cousin, and brother, according to a statement from his mother Greta Bogrow. He has left a gaping hole in our hearts, and I pray they find the offender(s) before it occurs again.

According to Bogrow, Yaw was homeless when he passed away.

According to the San Joaquin County Coroner’s Office, Jonathan Hernandez Rodriguez, 21, was discovered dead inside a vehicle on East Hammer Lane on August 11.

One of the more senior casualties was Lorenzo Lopez, 54. It’s difficult to comprehend that this has occurred, said his brother Jerry Lopez. My brother and I have always been like twins. We were quite close because of the year’s difference.

A native of Stockton and father, Salvador William Dubedy Jr., 43, was a victim. Five minutes after Yaw was shot, he passed away at the site of the incident despite police efforts to rescue him.

His wife was dissatisfied that she wasn’t contacted immediately after learning about the alleged link between the five deaths via social media.

‘What makes these cases so tough is that there are no witnesses due to the location, the time, and the absence of light,’ Stockton Police Chief McFadden said at the conference on Friday.

Detectives have looked over several hundred hours of film, he informed the press.

“We think they are related in some way.” We just don’t know how much at this point,’ he said.

He said, “By definition, you could very easily label this a serial murderer.”

It doesn’t align with the gang murder patterns that we are used to seeing.

We have no evidence that these are hate crimes since one of our victims was a white guy.

Some of them really had houses. Some weren’t even homeless; some even resided in the neighborhood.

Stockton residents have been warned by the police not to walk alone at night or in areas with poor lighting.

There is now a tip line accessible for anybody with information to contact. There is a 209-937-8167 number. Policetips@stocktonca.gov is another place to provide information.