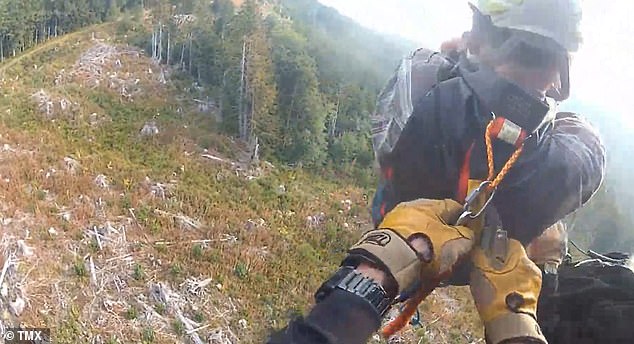 After a spectacular helicopter rescue, two elderly brothers who had just avoided death when their little aircraft crashed into a stand of trees in Washington state were saved.

When their Cessna crashed in Skagit Valley close to Lake Cavanaugh, Kyle Allyn and his brother, who were both 78 and 79 years old, were at the controls.

The boys fortunately escaped the collision and were able to exit the plane unharmed. According to the Snohomish County Sheriff’s office, the two men walked nearly a mile through the woods along a creek bed to safety before using their handheld radio to signal “mayday.”

Less than 12 hours after leaving Concrete Airport on their way to Snohomish, the guys were found on a logging road by the Snohomish County Search and Rescue team on Monday morning.

Dramatic video depicts the methodical evacuation of both men to safety by rescuers from Snohomish County Search and Rescue. One of the brothers was the only one who still wore his helmet.

The second brother, who was already sitting comfortably in the chopper, flashed a thumbs up as rescuers were lifting up brother number two.

According to officials, there was not much damage to the aircraft. Both males, though, were said to be worn out by the experience.

According to Allyn, their plane wasn’t moving very quickly when it collided with the trees, according to the news source.

Small aircraft, large mountain, the experienced pilot noted, adding that it was too late to turn back, according to KIRO7 News, was the cause of the disaster.

The two boys were reunited with their relatives soon after they were safe and back on stable ground.

The news source quoted Allyn as saying that he had learnt his lesson.

Around 7:50 p.m. on Sunday, the Snohomish County Sheriff’s Search and Rescue team received a report of a missing single-engine aircraft with a pilot and a passenger.

On Sunday about 2 p.m., the jet reportedly took off from Concrete airfield and later that afternoon it was on its way to Snohomish. The jet never arrived and was last spotted by another pilot near Sedro Woolley, according to the Snohomish County Sheriff’s office.

On Sunday night into the early morning hours, WSDOT Aviation Emergency Services flew a Cessna over the region in an effort to discover a signal from the aircraft. According to officials, WSDOT detected a locator beacon signal close to Lake Cavanaugh.

It was asked that the Sheriff’s Office SAR team conduct a more comprehensive search during daylight hours.

According to authorities, wildfire smoke in the vicinity precluded a low-level night search.

Both brothers radioed the helicopter rescue crew to their position after seeing the SnoHawk10 flying above. Both guys were then hoist-extracted from the heavily-wooded terrain.

They were both assessed by Snohomish Regional Fire & Rescue medics after they were on the ground and met by loved ones, according to authorities.

The fixed-wing, single-engine aircraft the brothers were flying was produced in 1953, according to the FAA. The NTSB is looking into the crash’s cause.