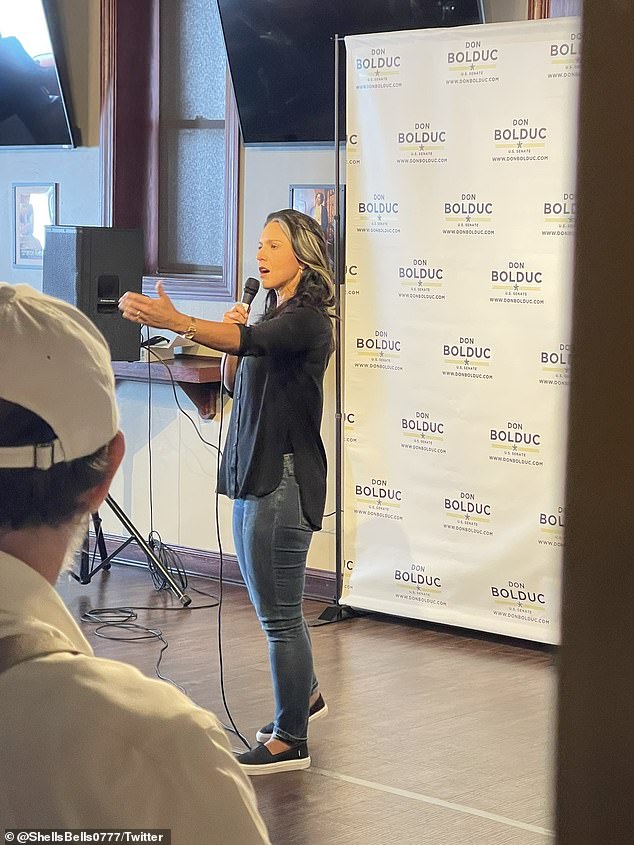 Tulsi Gabbard has been accused of equating Joe Biden to Adolf Hitler after she allegedly stated at a Republican event in New Hampshire that both men justified dictatorial behavior with good intentions.

Last week, Gabbard said she was leaving the Democratic Party, under whose banner she ran for president. On Sunday and Monday, she campaigned for Don Bolduc, a former Army general who claims Donald Trump stole the 2020 election.

According to recordings obtained by The Daily Beast, the former Hawaii representative told the crowd that Biden and Hitler shared a similar viewpoint.

Gabbard told the crowd at Murphy’s Taproom in Manchester, “And this is something that has existed throughout history, when we look at authoritarian leaders and dictators in other nations.” I’m fairly certain they all believe they are acting in the best interest.

Even Hitler believed he was acting in the greatest interests of Germany, right? To the German people. In his own mind, he created a justification for the measures he used to achieve his goal.

As President Biden stated in his Philadelphia speech, those who supported Donald Trump and those who did not vote for him are extremists and a threat to our democracy.

On Sunday, Tulsi Gabbard is pictured addressing the crowd in Manchester, New Hampshire, while riding a campaign train alongside Don Bolduc.

Gabbard and Bolduc embrace on Sunday: the former Hawaii congresswoman, who announced last week that she was leaving the Democrats, is supporting the New Hampshire Republican senate candidate.

In 2020, Gabbard campaigned for Bernie Sanders, but argued that her support for MAGA Republican Bolduc was not unusual.

Monday, Gabbard stated on New Hampshire radio that it was ‘crazy’ to suggest she had compared Biden to Hitler.

She has yet to react to a comment request.

Gabbard’s selection of Bolduc as her first personal endorsement since leaving the Democrats delivered a powerful message.

Bolduc is challenging the Democratic incumbent, Maggie Hassan, in a campaign that could determine Senate control.

Bolduc, who supports Trump, is viewed as an outsider, but Gabbard has lent her influence and considerable attention to his campaign.

When asked on Monday why she was supporting him, Gabbard told Fox News: ‘I’m an independent, and I’ve spelled out the reasons why I can no longer align myself with the Democratic Party of today, which is governed by obsessive ideologues and stands against freedom.

I’m campaigning with Don Bolduc because I know he puts country and the American people first, and I believe that more politicians and candidates for office would be wise to do the same.

Gabbard is pictured addressing the crowds in New Hampshire on Sunday.

When a reporter inquired about the coupling of Gabbard, a former Bernie Sanders campaigner, with the 60-year-old conservative, she answered, “It’s just an unusual couple; you’re focusing on the wrong things.”

Gabbard, a captain in the Hawaii National Guard who served in the Iraq War from 2004 to 2005, is a member of the Democratic Party. I believe it makes perfect sense for two people who have devoted their lives to serving our country, both in uniform and now in public service.

“It makes perfect sense when you consider the things we share in common, namely the constitution and freedom. The Declaration of Rights. It is concerned with meeting the needs of individuals in New Hampshire and across the nation.’

Gabbard, who debuted her own podcast last week, stated on Monday that she would not rule out a future presidential bid.

She emphasized, though, that it was not her present concern.

She stated, “It is also not something I am considering at the moment.”

She announced her departure from the Democratic Party on Tuesday morning in a series of tweets in which she criticized the Democrats’ “cowardly wokeness” and accused them of “stoking anti-white bigotry.”

She then appeared on Fox News and explained to Tucker Carlson why she could no longer support the Democrats.

She told Carlson, “I cannot join a party that intentionally destroys our freedom.”

She continued, ‘The Democratic Party of today is headed by obsessive ideologues who despise liberty. They have contempt for the Constitution. They aggressively destroy our God-given, Constitutionally protected liberties, such as freedom of speech.’

Tulsi Gabbard appeared on Tucker Carlson’s show on Tuesday night to discuss her decision, announced earlier in the day, to leave the Democratic Party.

Tucker Carlson is joined by Tulsi Gabbard to discuss why she left the Democratic Party:

“The Democratic Party of today is governed by fanatical ideologues who disdain liberty and the Constitution.” pic.twitter.com/h3D1njBw3q

Gabbard is pictured in 2016 with Bernie Sanders, whose presidential campaign she supported.

Gabbard stated that she had “always been an independent-minded individual” and that her first loyalty was to the Constitution.

Yes, he is a Democrat, but an independent Democrat.

As a military member, a soldier, and as a member of Congress, I swore an oath to support and defend the Constitution.

“This is an oath that I take very seriously,” the speaker continued.

She stated that she was concerned by the fact that the party to which she belonged worked “actively to destroy our liberties” and would not accept criticism.

Gabbard, who notoriously opposed the party on Syria and disapproved of their support for the rebels, even traveling to Damascus to meet dictator Bashar al-Assad, stated that the party retaliated by silencing her.

“They will do everything in their power to undermine you, silence you, and defame you. They will cooperate with Big Tech and corporate media to deliberately eliminate anyone who dares to question their plan.”

She stated that they were opposed to religious liberty, “aggressive towards persons of faith,” and discriminating.

The former congressman for Hawaii’s 2nd congressional district stated that she would have wanted the Democratic leadership to have simply, “You know what, let’s just agree to disagree.”

She said, “It speaks to the entire climate of fear fostered by those in authority, the elitists in charge, that people are reluctant to say the truth.

Instead of taking a stand for peace, prosperity, security, and the freedom of the American people, too many in Washington are warmongers, subservient to the military-industrial complex, and continue to put their own self-interests or the interests of their donors ahead of the cost and impact of their decisions on the American people.

She informed Carlson that she strongly disagreed with the Biden administration’s stance on Russia and accused them of “actively bringing us to the edge of a nuclear Armageddon.”

Gabbard informed Carlson that she believed Biden was pushing the United States to the verge of a nuclear apocalypse.

In October 2019, The New York Times questioned Gabbard’s motivations. It was a slander campaign sponsored by the liberal media and Big Tech, according to Gabbard.

Ana Navarro, a Democrat operative and journalist, was among many who criticized Gabbard in this 2019 tweet.

Gabbard stated that she quit the party because she questioned its policies and it turned on her. Gabbard asserted that the Democrats were conspiring with Big Tech and the liberal media in order to undermine her. Pictured is an October 2019 Los Angeles Times story.

Gabbard stated that other Democrats in Congress had remained silent in response to her decision to leave the party, with the exception of one who sent her a text message containing three thumbs up.

She refused to disclose who sent the message.

Previously, Gabbard, an officer in the United States Army Reserve, accused the party of “demonizing the police,” “supporting criminals,” “believing in open borders,” and “bringing us even closer to nuclear Armageddon.”

With only one month until the crucial midterm elections, she also pushed those who agreed with her to depart.

She released a video criticizing the party, whose members, she claims, “actively try to undermine our God-given liberties.”

The statement was made by Gabbard in the inaugural episode of her new podcast, The Tulsi Gabbard Show.

It is unclear if she will join another political party or remain independent.

Since competing for president in 2020 and leaving government in 2021, Gabbard has repeatedly targeted the Biden administration and the Democrats in her political commentary.

In a tweet accompanying her video, she stated: ‘I can no longer remain in today’s Democratic Party, which is now under the complete control of an elitist cabal of warmongers driven by cowardly wokeness, who divide us by racializing every issue & stoking anti-white racism, actively work to undermine our God-given freedoms, are hostile to people of faith & spirituality, demonize the police & protect criminals at the expense of

“I believe in a government that is of the people, by the people, and for the people.” Sadly, the Democratic Party of today does not.

Tulsi Gabbard announced her departure from the Democratic Party on Tuesday morning in a series of tweets in which she criticized their ‘cowardly wokeness’ and accused them of’stoking anti-white hatred.

The former representative for Hawaii’s second congressional district and officer in the United States Army Reserve accused the party of “demonizing the police,” “supporting criminals,” “believing in open borders,” and “bringing us even closer to nuclear Armageddon.”

It represents a government of, by, and for the powerful elite.

I am calling on my fellow independent-minded Democrats with common sense to leave the Democratic Party with me.

I welcome you to join me if you can no longer stomach the direction so-called awakened Democratic Party ideologues are driving our country.