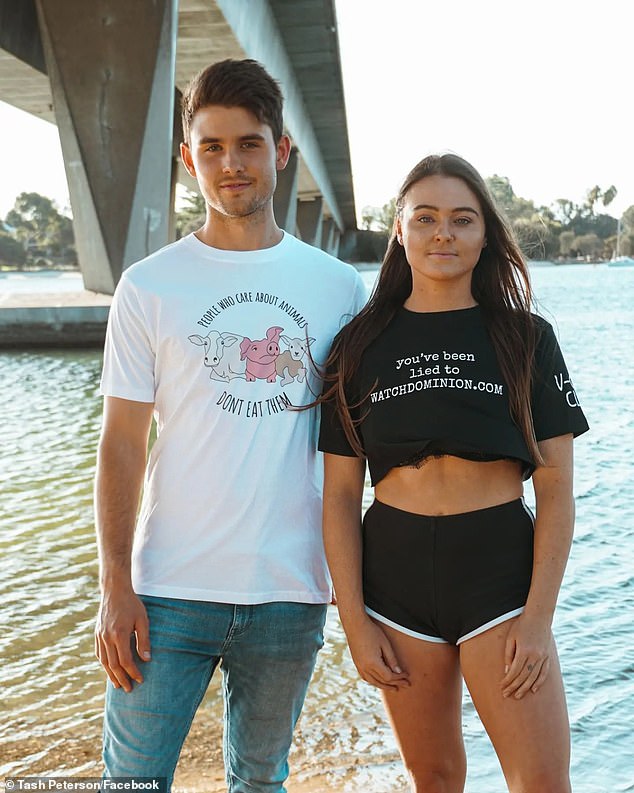 During her most recent court appearance, vegan activist Tash Peterson displayed her breasts while delivering a frank message to the local media.

The tenacious protester proudly revealed the blue marker tattoo on her breast that said, “F*** the West, Animal Liberation,” a jab at the West Australian newspaper.

The anti-meat activist made the offensive statement as she entered the Perth Magistrates’ Court on Thursday to answer charges related to a stunt at a cattle exhibition.

Following her alleged participation in a cattle-judging competition at the Perth Royal Show last month, Ms. Peterson, 28, was detained and prosecuted. She is accused of chaining herself to a fence with another protester.

She claimed on social media that the slur across her breast was directed at the Seven West Media-owned newspaper during her court appearance on Thursday.

In her statement, she said, “Today I stepped into court with this message response to The West newspaper who reported on my court appearance last month, portraying me as “docile.”

Until all animals are freed, I won’t stop interfering and engaging in civil disobedience. Until the end of animal enslavement and the animal holocaust, I will never be submissive.

The allusion was to a court appearance to answer to criminal charges stemming from an alleged outburst she allegedly made at a Perth Outback Jacks Steakhouse in Northbridge in June.

Ms. Peterson is accused of yelling at customers while playing distressing animal noises that she said were from Australian slaughterhouses.

According to Perth Now, the animal rights activist made his first court appearance on Thursday to answer to allegations related to the incident at the Royal Perth Show.

Ms. Peterson arrived with her lover, Jack Higgs, and went before the magistrate fully dressed.

Her case was continued until next month so that she may seek legal counsel without entering a plea.

The demonstrator and the animal lover reportedly barricaded themselves to a cow judging ring after storming the agricultural exhibition last month with another protester.

Both were accused of trespassing and engaging in unruly conduct while in the presence of others in a public area.

She posted on her social media accounts to inform her followers that she had interrupted the disgusting “Royal” Agricultural Show” with “fellow animal rights activist Aly.”

However, attendees of the yearly expo were not unfamiliar with the vegan enthusiast’s techniques.

She snarled, “These lovely and innocent people are going to be mercilessly killed and shot in the head,” as she leaped over a fence to interrupt a cow judging competition at the show in 2021.

An angry farmer then roughed her up and expelled her from the display as shocked bystanders including children looked on.

When Ms. Peterson first saw the popular Australian movie Babe, about an orphaned farm pig who aspires to be a sheep dog, she said it turned her off to eating meat.

She is well-known for her outspoken demonstrations, and only last month, in Sydney’s bustling Pitt Street Mall, she collapsed in a human-sized meat tray while almost nude, covered in blood, and wrapped in plastic like a slab of meat.

According to Ms. Peterson, her OnlyFans account, which she started last year to support her desire to devote all of her efforts to animal advocacy, brings her $40,000 each month.