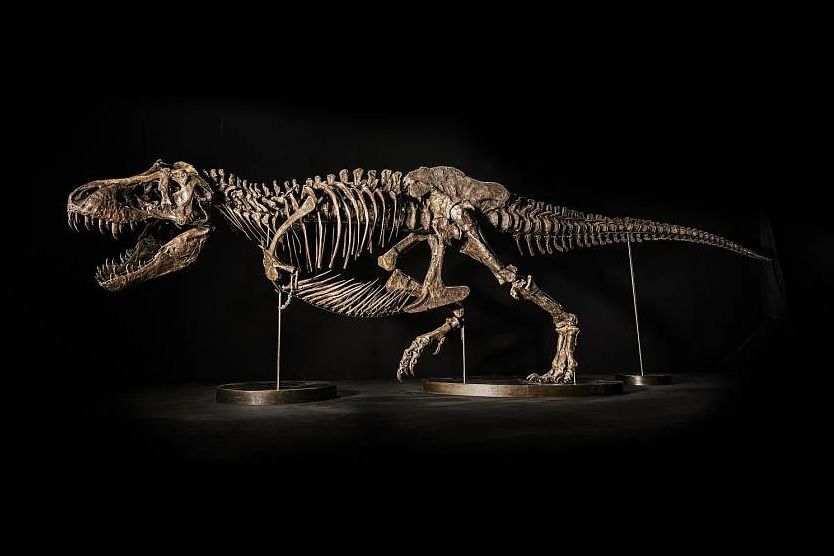 Friday, a Tyrannosaurus rex skeleton went on display in Singapore prior to its auction next month, while scientists criticized the lucrative bone trade as “destructive to science.”

According to Reuters, the exhibit attracted thousands of visitors, many of whom took photos with it.

The 1.5-ton, 80-bone frame will be the first T-Rex skeleton to be auctioned in Asia, according to Christie’s, which has not provided an estimate for the property.

Shen, which means divine, will be on display for three days before being flown to Hong Kong in November for sale.

Francis Belin, the president of Christie’s Asia Pacific, stated that none of the world’s twenty T-Rex specimens are owned by an Asian institution or collector.

We sincerely hope Shen will find a new home among our Asian collectors.

The adult dinosaur, measuring 15 feet in height and 39 feet in length, is believed to have been male. In 2020, it was extracted from private property in the Hells Creek Formation in Montana, United States.

“I’ve never seen a fossil in person before… It inspires awe since it is pretty grand “said 33-year-old Lauren Lim, who visited the show.

Shen, which lived 67 million years ago during the Cretaceous period, is not the only dinosaur to be auctioned in recent years.

However, some specialists are concerned about the tendency of prehistoric auction lots.

Steve Brusatte, a paleontologist at the University of Edinburgh, remarked, “It’s unfortunate that dinosaurs have become collectible toys for the oligarch class, and I can only hope this trend ends soon.”

According to him, the tendency is “bad news for science” and the remains belong in museums.

Thomas Carr, a U.S.-based paleontologist, described such sales as “incontestably detrimental to research,” even if the skeletons had been studied prior to being sold.

Carr stated, “A secure, permanent collection assures that a scientist’s observations of a fossil can be confirmed and duplicated, whereas a fossil owned commercially provides no such assurance.”

Belin of Christie’s stated that he hoped a public institution would purchase Shen and that the entire skeleton had been thoroughly examined, recorded in 3D, and “all of the skeleton’s components will be made available for public study.”

Belin stated, “We fervently hope that the next owner, whether an institution or a private individual, would ensure that it is accessible to the public.”