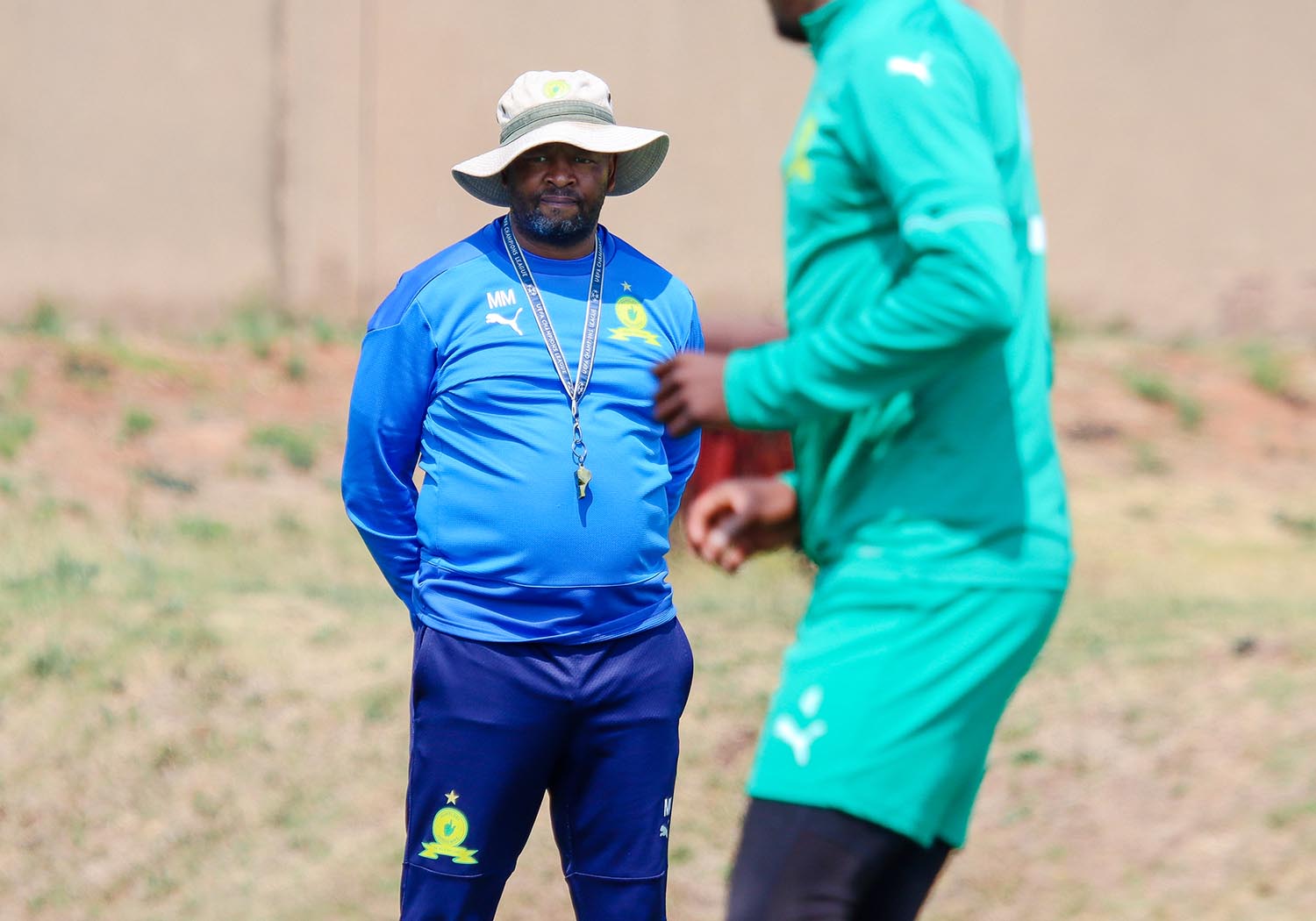 Mamelodi Sundowns defeated La Passe FC 7-0 last weekend in Pretoria to maintain their standing in the first round of the CAF Champions League.

As supporters flocked to Loftus Versfeld Stadium to cheer on the Tshwane giants as they started their continental tour, goals from Grant Kekana, Sphelele Mkhulise, Sipho mbule, a brace from Gaston Sirino, as well as an own goal, exploded. Prior to their victory, Downs Co-Coach Manqoba Mngqithi discussed their playing strategy.

The twins who play at the top, the #19 and #2, as well as their right wing back #4 (if I’m not mistaken), have attended trials in the Bundesliga, which tells you something.

“We had completed our assignment and we had seen that even though they may appear to have very bad players based on the score line, they still have some very good players, like the twins who play at the top, the #19 and #2.

We understood the formation would be three at the back with two wing backs and two sitting midfielders, so they are not as bad as one would imagine. We were expecting a 10 and a 14, but they instead began with a 10 and an 18. We anticipated a 7, 19, and 9 up top, and those numbers weren’t far off.

Regarding the final score of the game, I believe we might have performed better. However, we also handed them a few tense moments in transition when we could have easily been penalized.

The reality is that we prepared as we typically do for every game since we don’t like surprises and like to constantly be aware of what is most likely to occur.

Despite the enormous score, Coach Manqoba emphasized the importance of the team having a winning mentality for the second leg against La Passe.

He said: “The biggest assignment we have as Sundowns is to always try to better our benchmarks, and whoever is given the opportunity for this match also has the responsibility to live up to our expectations as the technical team.

We are able to observe everything that takes place during a game, including how many box entries, dribbles, and distances are covered.

Each player must demonstrate their merit to be given a chance to play in the next game, but this is made more important because we have very important assignments coming up after these two matches.

Masandawana gave its fans a day full of enjoyable events, including halftime musical performances by a local talent. In addition to a specific kids section featuring a jumping castle and entertaining activities on the day, Downs stated on its social media sites that children under the age of 12 would be admitted free to the stadium.

The coach of the Brazilian team spoke about the club’s efforts to provide its fans with unique and novel experiences at the stadium.

“Sometimes in South Africa we don’t learn from our own history, because our history suggests that our people are prone to come to the stadium if there is also some sort of artists or music, they like that, and that’s why if you check the numbers that artists usually gather in their small concerts or festivals, [it’s] usually more than what we collect as teams into the stadiums.

That’s what we were doing under the reign of Abdul Bhamjee, and it was effective—our stadiums were packed. The stadium was packed when I saw the AmaZulu vs. Kaizer Chiefs game in the Mainstay Cup because we always included that spice in our games.

“I believe Sundowns is also trying to bring it back,” he said. “We nearly always have an artist at home games so that those who may not be big football fans would have something else to enjoy for entering the stadium. In order to improve our football, I believe it would be wise to strive to bring as many fans as possible to our games.

I’m not sure why, but not many people are eager to visit the stadium.

There are too many fans, yet they are not always present in the stadium seats when you would expect them to be.

I believe that is the approach Sundowns has taken, and I can say with certainty that even in this next game we will have the same treatment with an artist and DJs before, during, and after the game. I think it is a great move on the club’s part.

On Friday, October 14 at Loftus Versfeld Stadium, Mamelodi Sundowns and La Passe FC square off in the second leg of the CAF Champions League second preliminary round. Live on SuperSport, kickoff is scheduled at 17:30.

»Sundowns’ main goal is to improve our standards«