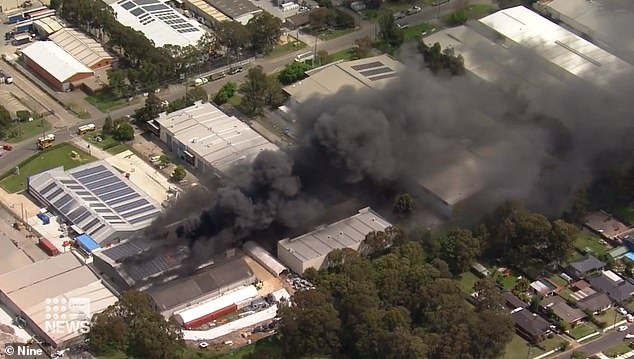 In Sydney’s west, a huge fire tore through a pharmaceutical business, spewing smoke into the sky.

After the incident broke out soon after 2pm on Sunday, more than 70 firemen and over 15 fire vehicles were sent to the Star Combo Pharma factory on Woodpark Road in Smithfield.

The factory’s solar panels caught fire as a fire tore through the structure, blanketing nearby buildings in clouds of heavy, black smoke.

Because it was too hot to enter the plant, firefighters attempted to put out the fire from the air using a cherry picker.

Fire and Rescue NSW said on Sunday afternoon that the fire was so intense that firefighters were unable to enter the building and had to battle it from the outside using cherry pickers and water towers.

The extinguishment is being impeded by difficulties putting water onto the fire since there are few openings in the structures, even if the firemen did a fantastic job of keeping it contained to the building.

Although it seems that the fire has been put out, residents of the nearby neighborhood of Greystanes are being urged to remain indoors and refrain from using air conditioning to prevent smoke inhalation.

Authorities have subsequently verified all are safe and accounted for, despite initial worries that one person was inside when their vehicle was discovered outside the building.

Pharmaceuticals, cosmetics, vitamins, and dietary supplements are all produced by Star Combo Pharma and distributed both domestically and abroad.

According to reports, the facility just underwent a multi-million dollar makeover.