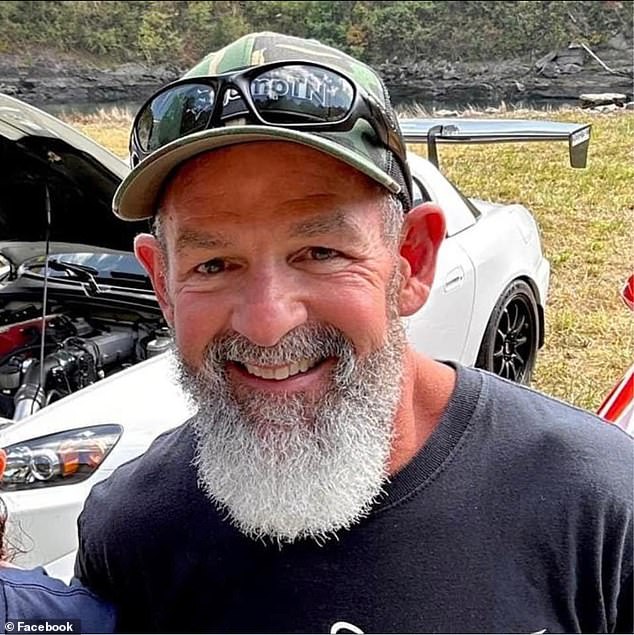 A member of a professional skydiving team has died after plummeting to earth during a Tennessee high school’s pre-game show.

Richard Sheffield, 55, was a member of a group of skydivers hired to entertain spectators before the annual Washington County high school rivalry game between David Crockett and Daniel Boone.

Sheffield, an experienced skydiver whose entire family enjoys the sport, is captured on camera attempting a stunt landing.

The illusion appears to fail, as Sheffield plummets to the land behind the stadium.

He was transported to the hospital, where he was declared dead.

His son Stacey commented on Facebook, “Today just doesn’t seem real and is the most difficult day of my life.”

My father, one of the most significant individuals in our lives, passed away yesterday.

“I am so grateful for the friendship we shared. We communicated daily, numerous times per day.’

Sheffield and his wife Kim had been married for 38 years and had twin sons named Stacey and Casey.

Stacey said, “The ability to jump with your father is an additional degree of coolness.

“One of my father’s greatest passions was speed, and that is how he passed away.

People look at what we do and think it’s insane, and maybe it is, but our father lived a full life, and he encouraged us to do the same.

He left an impression on everyone he encountered.

But gosh, if I could just hear it one more time…’ he added.

He said, “He was the greatest father, husband, and Pops.”

“You may not have reached 120 years, as you always said, but you certainly attempted to squeeze that out of 55.”

‘Until we travel again, Dad. I love you. Blue Skies.’

Casey stated that their father taught them to skydive when they were seven years old and that he lived a life without regret.

Casey stated, “The idea that I can’t just pick up the phone and contact him seems unreal.”

He was the first person I phoned for assistance. He was the cornerstone of the family.

We are extremely fortunate to have had the time we spent with him, as he was the coolest, kindest, baddest dad in the area.

But one thing is certain: he lived his life to the fullest, with NO REGRETS.

Casey stated that his father was cognizant of the risk, but desired to enjoy life to the fullest.

“He knew the hazards, as did we all.

However, he had a passion for speed, and that finally led to his demise.

Together, we enjoyed flying, and I’m grateful to have shared the skies with him.