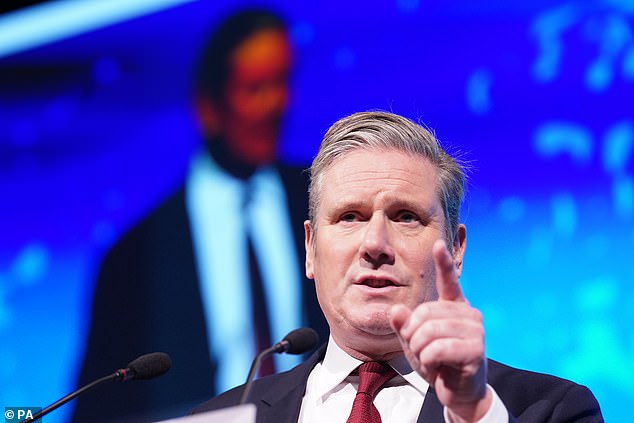 Following Liz Truss’ departure, Sir Keir Starmer increased his demands for a general election and demanded an end to the Tory “soap spectacle.”

Sir Keir emphasized that people must have “their voice” at the polls shortly after Ms. Truss announced she was quitting her record brief tenure as prime minister.

After a week-long fight for the Conservative leadership, the second in three months, the outgoing PM plans to hand over power to a new Tory leader and PM.

The next general election, which is not scheduled to take place until January 2025, has been asked for to be moved forward by Sir Keir, whose party is now leading in the polls after Ms. Truss’s unstable reign.

Sir Ed Davey, the leader of the Liberal Democrats, backed the appeal made by the Labour leader by urging Conservative MPs to support an early election.

The Tories trailed Labour by 36 points, according to a Redfield & Wilton survey issued on Monday. This was the largest lead ever recorded by a pollster for any party.

The poll even predicted that the SNP will replace the Tories as the official opposition at Westminster, leaving them with a meager number of MPs.

Sir Keir spoke to the media in Downing Street immediately after Ms. Truss’ resignation: “Well, what a mess.

This is not simply a soap opera at the top of the Conservative Party; it is seriously harming both our economy and the image of our nation.

And the general population is paying via rising prices and mortgages.

Therefore, a chaotic revolving door cannot exist, and another experiment at the head of the Tory party is not allowed.

There is an alternative, and that is a strong Labour administration.

There should be a general election since the people have a right to vote.

In order to “stabilize the economy and execute a meaningful strategy for growth for living standards to assist people through a cost of living crisis,” the Labour leader claimed that his party was “ready to form a government.”

By submitting a motion for a vote of no confidence in the House of Commons, Sir Keir may try to trigger a general election.

Convention dictates that the Government must provide parliamentary time for the motion to be discussed if the opposition leader does so.

Although it would be improbable that Tory MPs — many of whom could fear losing their areas — would vote to topple their own government, a general election might be called if the government fails.

“The Conservatives have repeatedly shown that they are unqualified to govern our wonderful nation.”

“We need a general election, the Conservatives to lose power, and genuine change. We do not need another Conservative PM lurching from crisis to crisis.”

“It is time for Conservative MPs to fulfill their patriotic responsibility, prioritize the welfare of the nation, and offer the people a voice.”

A general election, according to SNP leader Nicola Sturgeon, is a “democratic necessity” as she sought to lay out her new arguments for Scottish independence this week.

There are no suitable words to express this complete catastrophe, she said on Twitter. It goes beyond exaggeration and satire.

The truth is, however, that common people are suffering as a result. No one should be worried about the Tory party’s interests right now.

“Nowadays, a general election is a democratic need.”

In his address to union barons earlier today, Sir Keir sharpened the knife in the last hours of Ms Truss’s government.

The Labour leader reiterated his call for a speedy general election while speaking to the TUC congress in Brighton.

Insisting that the political option was “stark,” he accused the Government of engaging in “pathetic squabbles.”

And Sir Keir pointed out “the distribution of income” as a point of contention with the PM in a clear indication of his intentions to unions.

According to Sir Keir, “The Prime Minister is absolutely out of touch with the realities of the British economy.”

She hasn’t changed her mind about how money is distributed in Britain, therefore she doesn’t care about it.

Congress, forget about lines on a graph, he said. This many people must be left behind; otherwise, a country cannot develop equitably.

Low pay, unstable employment, and subpar labor are insufficient, and you need a contemporary industrial strategy to succeed.

“This isn’t a discussion.” The proof is there.

Britain deserves better, it can no longer afford the instability caused by the Conservatives, and a general election is urgently required, according to Sir Keir.

“Britain can never again take its claim to be a party of ambition or sound money seriously.

Even by their standards, last night in Parliament was hectic.