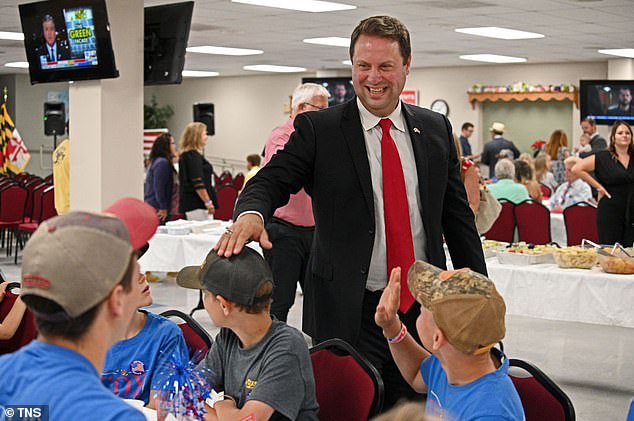 Dan Cox, a candidate for governor of Maryland, has denied any involvement with the far-right group Proud Boys after a video showing him receiving a gift from a member surfaced.

The Republican was interacting with voters at a summer event when he was approached by Henry, a member of the Maryland Proud Boys wearing a black polo with the organization’s emblem.

With security close following, Cox shook Henry’s hand and accepted a black comb from him.

“This is a gift from the Maryland Proud Boys,” Henry stated in the video, which was originally placed on Cox’s Vimeo account but was later removed and reposted by the Washington Post.

The candidate for governor regarded the comb with confusion before asking the man’s name and flashing his finest politician’s smile.

Before going on to the next visitor waiting to introduce themselves, Cox added, “Nice to meet you.”

Since then, the Republican has denied any association with the group, telling the Post that he “didn’t even keep the comb.”

“In the din of the victory celebration, it was difficult to hear what was being shouted,” he told the Post. I was shocked when he handed me something.

I had never seen him before, and I haven’t since. I have no affiliation with anyone who participated in the violence on January 6th, period.

After winning the primary in July, the father of ten began to distance himself from party conservatives. According to the Post, he canceled his account on Gab, a social platform where white nationalism and hate speech are prevalent.

He has not discussed his choice to remove the account publicly.

According to the Post, he has even publicly distanced himself from Trump, despite the fact that the former president hosted an event for him at his Mar-a-Lago estate, where tickets were an ironic $1,776 and to be photographed with the two of them cost $25,000.

According to Maryland Matters, Cox has also distanced himself from Trump’s Make America Great Again movement and his participation in the January 6 disturbance, where he reportedly organized buses to the protest and dubbed Mike Pence a ‘traitor.’

The Proud Boys were there during the riot and have been in the spotlight throughout trials for insurrectionists over the past few years.

Former Proud Boys leader Enrique Tarrio and four subordinates have been charged with seditious conspiracy in relation to the January 6 disturbance at the United States Capitol.

These are the most serious allegations yet brought against Tarrio and the right-wing organisation.

Tarrio did not participate in the riot on the Capitol on January 6, 2021, but he allegedly orchestrated the events from within the fringe group’s “command and control” apparatus.

Two days prior to the brawl, Tarrio was arrested in Washington and charged with vandalizing a Black Lives Matter flag at a historic Black church during a December 2020 demonstration.

He was forced to leave DC, but instead went to a parking garage where he met with a documentary film team, other Proud Boys, and Elmer Stewart Rhodes III, the founder of the Oath Keepers, another far-right group that participated in the incident.

Tarrio pled guilty in August to two misdemeanor charges related to the burning of the BLM flag and was sentenced to five months in jail.

Since January 6, according to Heidi Beirich, co-founder of the Global Project Against Hate and Extremism, local chapters of the Proud Boys have been “working intensively.”

It is unsettling to see Proud Boys at genuine political activities. She informed the Post that they should not be.

It is a white nationalist and misogynist organization. The length of the list of violent Proud Boys is a mile long. Canada and New Zealand have outlawed the organization as a terrorist group due to its extreme risk.

A representative for Cox’s opponent, Wes Moore, told the Post that the comb incident ‘demonstrates what we’ve always known: Cox is a dangerous zealot who does not belong in the governor’s office.