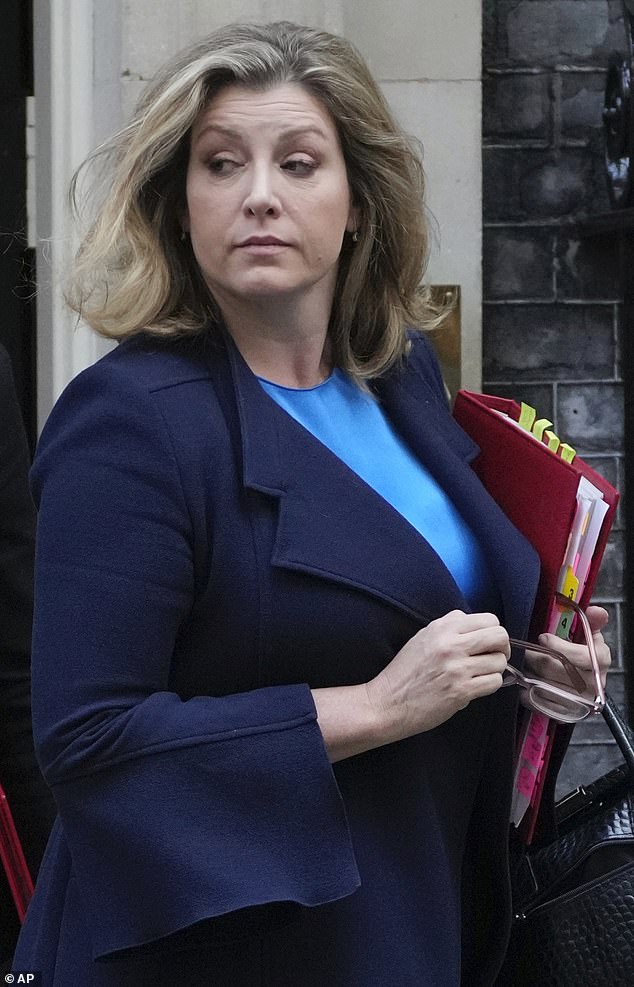 Ms. Mordaunt’s chances appeared gloomy, as Rishi Sunak had more than 100 proclaimed supporters and Boris Johnson’s aides informed her that he had privately surpassed that barrier.

Last night, only 23 MPs publicly backed her, much fewer than the 67 who initially supported her in July’s leadership contest.

To advance to the next round, candidates must receive the backing of at least 100 of the 357 Conservative MPs, meaning no more than three can compete.

A source close to Ms Mordaunt, seen on the left, argued that she was not tarnished by her participation with the “psychodrama” between Mr. Johnson and his former Chancellor.

Her challenges to gain support come after she repeatedly refused to explain Liz Truss’s absence from Parliament last week, causing foreign embassies to fear an escalation of the Russia-Ukraine war.

At least nine times, Ms. Mordaunt informed MPs that there were “real” and “legitimate” reasons for Ms. Truss’ absence from the Commons to answer questions about the dismissal of Kwasi Kwarteng after his botched mini-Budget.

However, Ms. Mordaunt refused to disclose these reasons, causing foreign diplomats located in London to be concerned that she was being briefed on Russia’s nuclear weapons testing after President Vladimir Putin had threatened to use them.

Ms. Mordaunt, filling in for Ms. Truss, stated that the Prime Minister was not “hiding under a desk.” Ms. Mordaunt responded, “I cannot discuss the reasons for the Prime Minister’s absence; I have inquired if I can.” I am being completely sincere with the House regarding this topic.

After it was claimed that Ms. Truss was resigning, Ms. Mordaunt stated that there were’very serious problems, as well as economic matters’ in her inbox, thus clouding the situation.

A Foreign Office source stated that they could not rule out the possibility that embassies had inquired about the situation in Ukraine.