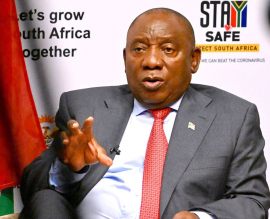 In the next weeks, President Cyril Ramaphosa will participate in a variety of bilateral and multilateral engagements to promote South Africa’s economic growth and development, and also international cooperation.

The Presidency said in a statement released on Tuesday that the President is presently planning to expand partnerships for growth and development in South Africa and for global solidarity, security, and inclusive prosperity.

The Presidency emphasised that South Africa’s economic diplomacy programme is crucial to the implementation of the Economic Reconstruction and Recovery Plan to rehabilitate the economy.

“At the multilateral level, South Africa seeks to advance its national interest – the well-being and development of all citizens – as well as the development priorities of developing countries including the SADC region and the African continent, and to promote an equitable rules-based multilateral system,” the Presidency said.

“Still in October, President Ramaphosa will undertake a Working Visit to the Kingdom of Saudia Arabia, in fulfilment of a planned visit the President postponed in April 2022 to focus on government’s intervention in the KwaZulu-Natal flood disaster,” the Presidency said.

Saudi Arabia is South Africa’s major supplier of imports from the Middle East and its second largest commercial partner in the area.

In November, President Ramaphosa will attend the 27th Conference on the Prevention and Mitigation of Climate Change (COP 27) in Sharm el-Sheikh, Egypt.

At the worldwide summit on action on climate and sustainable development objectives, heads of state and government, government delegations, non-governmental organisations, delegates from the corporate sector, and other representatives will convene.

The delegates will also discuss adaptation and resilience, climate4 finance, education and youth, gender, innovation, and land use as part of their debates on reducing climate change and ensuring future generations’ sustainability.

“President Ramaphosa will subsequently undertake a visit to the Republic of Kenya for his first engagement with recently elected President William Ruto with a view to expanding trade between the two countries and enhance people-to-people relations between two significant economies in their respective regions,” the Presidency said.

Still in November, President Ramaphosa will attend the G20 Summit in Bali, Indonesia, where the leaders of the world’s major established and developing economies will address the global goals promoted by Indonesia during its period as the G20’s chairman.

Among these objectives are the global health architecture, the shift to a sustainable energy source, and the digital revolution.

The Presidency said that the State Visit followed trips by Presidents Mandela, Mbeki, and Zuma to the United Kingdom at this level since the dawn of democracy, as well as visits by King Charles III and Queen Consort to South Africa.

South Africa and the United Kingdom are key allies with a robust partnership based on a shared commitment to liberal principles, democracy, and the rule of law.

The two nations have a vast variety of common interests and continue to strengthen their partnership to address global concerns.

Venezuela is a critical partner of South Africa in Latin America, particularly in the framework of South-South cooperation and the possibility for future economic engagement as a result of its rich oil and gas deposits.

The Presidency said that it would give further information, including dates, as these events approach.