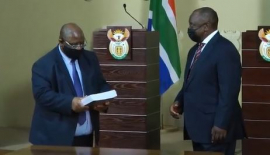 President Cyril Ramaphosa said on Thursday that efforts are ongoing to react to the findings and recommendations of the State Capture Commission and prevent its reemergence in the future.

According to the President, a number of government departments, agencies, State-owned enterprises, and Chapter 9 institutions are involved with the report’s conclusions.

In the National Assembly, the President was replying to questions for oral reply.

He was responding to a variety of queries offered by parliamentary parties.

In January of this year, some four years after the founding of the Commission, Chief Justice Raymond Zondo presented the first three-volume report at the Union Buildings in Pretoria.

“When I received the final report of the State Capture Commission in June 2022, I said that I would study the report and provide a comprehensive response and a plan for implementation within the court-stipulated timeframe of four months,” he said.

According to the President, this necessitates consideration of about 358 Commission proposals.

According to the President, these include taking action against suspected corruption perpetrators and enablers, the recovery of monies, recommended changes, and prosecution.

“As a result, many of the recommendations for criminal investigation, prosecution and asset recovery contained in the Commission’s report were already receiving priority attention.”

In addition, all parties were engaged in efforts to address the Commission’s findings and recommendations.

“You may recall that I amended the regulations of the State Capture Commission in 2020 to permit sharing of information, records or documents with any law enforcement agency.

“This was to enable law enforcement agencies to proceed with investigations while the State Capture Commission was busy with its work.”

Consequently, several of the report’s suggestions for criminal investigation, prosecution, and asset recovery are gaining consideration.

In the meanwhile, he said that this does not imply that the government has been waiting for the submission of this response plan to begin implementing Commission recommendations.

“Our approach is guided by the need to ensure both that the perpetrators of State Capture face the consequences of their actions and that we use this opportunity to design and implement far-reaching reforms to prevent a future occurrence.”

He argued that it was crucial to consider the State Capture Commission findings as an excellent chance to address the past.

“But more importantly, to also deal with what should happen in the future in the form of preventing State Capture in any shape or form re-emerging in our country.”