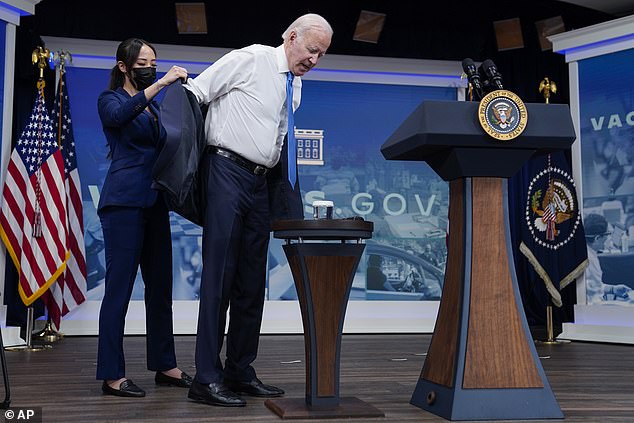 On Tuesday, President Joe Biden got his third COVID booster injection and urged other Americans to do the same before the holidays.

The president claimed that “the truth is not enough people are getting” their booster. “Take the shot.”

He forewarned that as the cold weather sets in and cases increase in Europe, the death rate in the United States may also increase.

‘I’ll try to be as clear as I can. In this nation, dozens or even hundreds of people still pass away from COVID every day. Hundreds. This winter, that number is most likely to increase. However, this year is distinct from previous years. Almost all deaths this year could have been avoided, he claimed.

He added that it was crucial to get updated shots because “the weather is getting colder; people will spend more time indoors,” adding that “new variants emerge here in the US and around the world.”

Biden declared that the pandemic was over in September on CBS’s 60 Minutes. But because people will be staying indoors more this winter, the administration has been preparing for an increase in cases.

Biden urged Congress to provide more funding for testing and vaccinations, saying, “This is a global health emergency.”

“As we enter this new phase of the fight against COVID, let’s use it to start over as a nation and leave all the previous conflicts over COVID in the past. putting aside all partisan politics. According to him, we have already lost over 1 million Americans to COVID.

We can take a lot of action right away to lessen the number of fatalities caused by this terrible illness. We have the resources. The shots are on hand. The remedies are at hand. Politics are not at all relevant here. It concerns your health, he continued.

The administration is starting a public awareness campaign to encourage Americans to get the most recent protection from the BA.4 and BA.5 subvariants of Omicron in response to concerns that COVID cases will increase this winter.

In order to reach the historically underserved Black and Latino audiences, there will be a number of new national and local TV, radio, and print advertisements.

Additionally, Medicare will email reminders to its 16 million email subscribers, and the president will ask business executives and school administrators to spread the word about vaccinations.

There were executives from Walgreens, CVS, Rite Aid, and Albertson’s in attendance.

Biden demanded that by Thanksgiving, every school district, college, and university host at least one vaccination clinic. Additionally, he asked companies to provide paid time off for immunizations and to hold on-site immunization clinics for workers.

“Almost every homicide in America could have been avoided.” essentially everyone. The majority of people who pass away from COVID this year will either not have taken Paxlovid when they were ill or will not have had their immunizations up to date, the president stated.

Only 20 million individuals, or 8.5% of those who are eligible, have received the vaccination despite demands for everyone to do so by Halloween, more than a month into the campaign.

For all under-5s who have had all of their recommended vaccinations, health officials advise the latest boosters.

It appears among red flags There are growing worries about other respiratory viruses this year as well as an increase in COVID infections in 15 states.

The difficulty with the Christmas season is that it’s also a time when dangerous respiratory infections, such as influenza, RSV, and, once again this year, COVID, spread extremely fast, Jha noted during a news conference earlier this month.

He said, “And each of the last two winters, we have observed a rise in COVID infections, hospitalizations, and fatalities.”

In the next several months, the government, according to Jha, anticipates a rise in COVID cases.

“As November, December, and January approach, illnesses will increase.” That’s not shocking since that’s what we witnessed the previous two winters, he added.

But there is no indication that these novel variations of Omicron are more likely than previous variations to result in serious illness or death.

Biden got his latest booster approximately three months after he tested positive for the virus in July, which is the recommended amount of time, according to health officials, to pass after an infection.

His most recent shot was his second booster shot to bolster his immunity for the summer, which he received on March 30 of this year.

However, after receiving every vaccination, Biden tested positive for the illness in July of last year.

He started off with a little ailment, but after being prescribed the antiviral drug Paxlovid, his infection almost completely vanished after five days.

However, he tested positive once again four days later in what is known as a “rebound infection.”

On August 7 of this year, he was once again virus-free.

A few weeks later, on August 16, while the family was finishing their vacation in South Carolina, Jill Biden tested positive for a covid.

Currently, the US records roughly 36,400 instances every day on average.

Additionally, on average, 367 individuals each day are passing away from the illness.

For reference, there were more than 1,600 every 24 hours at the same period last year.

»President Joe Biden encourages others to take their COVID-19 booster«