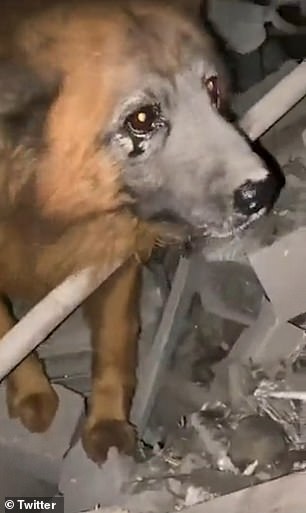 This distressing image shows a traumatized dog standing over the wreckage of his house in Ukraine after a Russian missile attack killed all of his family.

The crime in Dnipro early yesterday morning claimed the lives of Krym’s owners Natalia, her children Vasylisa, 12, and Ivan, 8, as well as their dog Jack and grandma Alla.

First responders discovered a distraught Krym (Crimea) wailing atop the wreckage, and they transported him to the veterinarian.

And when their father came home after fighting on the front lines, his whole existence had been destroyed.

Crimea is seen in footage standing motionless in the hole where his former house once stood, seeming to be all alone and forlorn.

As the camera pans closer to the wreckage and the debris, the helpless dog looks away.

terrified and perplexed Krym refused to leave the house, and social media allegations claimed that the bomb had left him blind and deaf.

Originally from Polia Street in Dnipro, the family relocated to their grandmother’s home in a different neighborhood at the beginning of the invasion, which is where the missile attack took place.

The mayor of Dnipro, Dnipro Filatov, said: “You’ve seen the pictures of this shell hole, which is around 8 meters deep and 10 meters broad. People who were at the explosion’s core simply vanished.

Only the elderly, traumatized dog Crimea was alive and barking at the rubble.