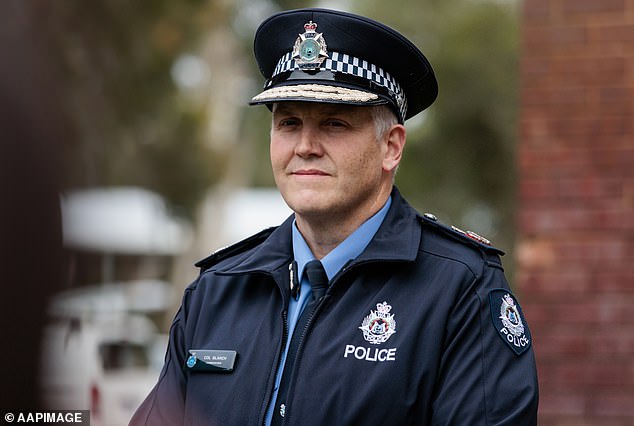 The statement by a senior police officer that an indigenous youth who was reportedly murdered was “in the wrong place at the wrong time” has generated intense indignation.

Cassius was allegedly beaten with a metal pipe after he and three companions were attacked by thugs on their way home from school in Middle Swan, located in Perth’s north-eastern suburbs.

Mr. Blanch stated that the alleged attack was precipitated by a ‘damage event’ involving smashed glass, and that the youngster was ‘in the wrong place at the wrong time’

The words provoked widespread outrage, with many people reacting harshly to the chief police officer’s remarks.

Cassius Turvey (left) was allegedly beaten with a metal pipe on October 13 when he and three classmates were attacked by thugs while walking home from school.

The Police Commissioner, Col Blanch (pictured), was criticized on social media after he stated that the incident may have been a case of “being in the wrong place at the wrong time.”

Cassius (shown) sustained severe head injuries and was hospitalized for five days before being released. However, only hours after his departure, he experienced a seizure and two strokes and had to be taken back. He then passed away on Sunday.

The statements were made by Commissioner Blanch during an interview with radio broadcaster Gareth Parker on 6PR Breakfast Radio.

Parker probed the commissioner for information on whether or not Cassius and his companions were involved in the incident of property destruction.

We have no evidence to imply that at this point in the investigation, he told the radio host on Wednesday.

In the wake of the interview, social media lit up as commenters reacted to the commissioner’s remarks amid suspicions that the claimed attack was motivated by racism.

Jack Steven James Brearley, 21, has been charged with murder in relation to the incident.

Where should a child get off the school bus, said one commentator in response to a social media post (pictured)

Where is the best location for a youngster to exit the school bus? one commentator said.

‘Victim attributing their school run to a child. A new low,’ said someone another.

Another added, “struggling to find “the appropriate position”.”

One more person stated, “Wrong place/Wrong time is a horrible comment by the cops.”

Another said, “They refuse to perceive it as the blatant bigotry that it is.”

One commentator, however, backed the commissioner, stating, “He was suggesting that the police were investigating the possibility of mistaken identity in order to determine a motive.”

Critics took to social media (shown) in response to the commissioner’s comments, with one stating, “Victim blaming a child for their school run.” A fresh low’

Commissioner Blanch emphasized that police were not “working on any racist principles or intentions at this time” and stated it was inappropriate for him to speculate about the cause of death.

He noted that the ‘tragic’ incident was still under investigation, as homicide detectives were still gathering evidence and interviewing witnesses.

One of the suspected assailants was 21-year-old Jack Steven James Brearley, who has been charged with the heinous murder (shown).

After the group of teenagers exited the bus, it is said that three guys in a black truck drew up alongside them.

The males allegedly began screaming racial slurs towards the students and accused them of breaking car windows.

The suspects are then said to have exited the vehicle armed with a machete and metal pipe before ordering the children to “run.”

While Cassius’ pals hid in a neighboring TAFE, the 15-year-old was allegedly captured and brutally assaulted by the group.

He sustained severe brain injuries and was hospitalized for five days before being released. However, only hours after his departure, he experienced a seizure and two strokes and had to be taken back. He passed away on Sunday.

A GoFundMe page was created to assist the family of Cassius with funeral “additional expenditures” and to “fight for justice” on his behalf.

While Cassius’ pals hid in a neighboring TAFE, the group allegedly captured the 15-year-old and brutally assaulted him (pictured, Cassius Turvey)