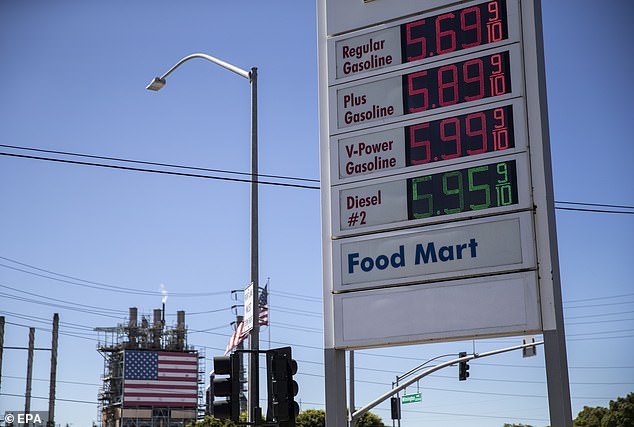 As OPEC+ proposes lowering supply by more than 1 million barrels per day, which would be the largest reduction since the epidemic, the already expensive price of gasoline could increase even further.

In an effort to bolster the market, oil prices increased by more than 3 percent during early Asian trade on Monday morning.

Brent crude, the global energy standard, plummeted to $87.96 per barrel last week, marking its fastest decline since the outbreak of the pandemic.

AAA reported that the average price for a gallon of gas in the United States is currently $3.7

9. The price surged for five consecutive days last week when the Federal Reserve raised interest rates to 3.25 percent out of concern for a worldwide recession.

The Organization of the Petroleum Exporting Members (OPEC+), which includes OPEC countries and allies including as Russia, is considering a production cut of more than 1 million barrels per day (bpd) to maintain prices, OPEC+ sources told Reuters on Tuesday.

Last week, gas prices in the United States increased for the fifth consecutive day to $3.71, a little more than a week after the country’s gas prices rose for the first time in nearly 100 days to $3.68, which marked the end of a historic streak of falling prices due to increased supply and decreased demand for fuel. The average price per gallon is presently $3.79.

This substantial production drop is likely to enrage the United States, which has been pressuring Saudi Arabia to continue producing more in order to reduce oil prices. As the West wants to penalize Russia for sending troops into Ukraine, the United States seeks to reduce Russia’s earnings.

OPEC+ hastened some production cutbacks throughout the summer in anticipation of President Joe Biden’s visit to Saudi Arabia in July, during which he infamously fist-bumped Saudi Crown Prince Mohammed bin Salman (MBS) when he entered for a meeting with the controversial monarch.

OPEC+ increased oil production by a tiny amount in August, but has since sought to reverse those moves.

The OPEC+ meeting will be held on October 5 against the backdrop of plummeting oil prices and months of extreme market volatility, which caused the leading OPEC+ producer, Saudi Arabia, to suggest that the group may reduce output.

If the reduction is approved, it will be the group’s second consecutive monthly reduction after a 100,000 bpd reduction last month.

In July, OPEC+ fell short of its production targets by over 3 million bpd, according to two sources within the producer group. Sanctions against certain members and limited investment by others hampered the club’s capacity to increase output.

Less than 500,000 barrels per day would be disregarded by the marketplace. Analysts from ANZ stated in a report that there is a significant possibility of a 1 million-barrel-per-day decrease.

FGE, a leading worldwide oil and gas consultant, stated that while Brent prices could improve more in the foreseeable future, fears of a global recession will likely restrict the upside.

‘If OPEC+ decides to cut output in the near future, the resulting increase in OPEC+ spare capacity is likely to put more downward pressure on long-term prices,’ the firm wrote in a report on Friday.

Adel Hamaizia, a visiting fellow at the Center for Middle Eastern Studies at Harvard University, told the Wall Street Journal that the output decrease could increase inflation and exacerbate the decline in oil demand.

State and private refiners can export up to 15 million tons of gasoline, diesel, jet fuel, and low-sulfur fuel oil, boosting much-needed supplies to global markets to replace Russian exports banned in February by the European Union.

Analysts and dealers predicted that a portion of China’s shipments will extend into early 2023 since refiners will need time to ramp up.

On Sunday, reports indicated that the reduction could approach 1 million bpd. One of the sources said that production cuts could potentially involve Saudi Arabia’s voluntary lowering of output.

Since March 2020, OPEC+ will meet in person for the first time in Vienna.

In recent days, analysts and OPEC observers such as UBS and JP Morgan have speculated that a cut of approximately 1 million barrels per day (bpd) could help halt the price slide.

Stephen Brennock, an oil dealer at PVM, stated, “Oil at $90 is non-negotiable for the OPEC+ leadership, thus they will move to protect this price floor.”

83 percent of Americans believe the economy is extremely or very important in determining how they will vote in the 2022 elections, according to a new ABC News/Ipsos survey, and a majority disapprove of Biden’s handling of economic recovery, inflation, and gas prices.