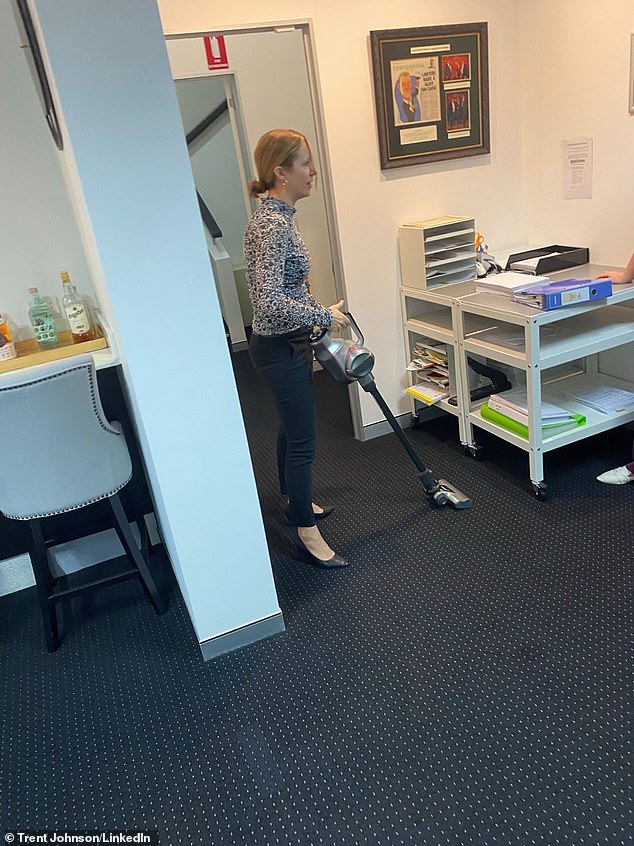 Female lawyers are outraged over a sexist and patronizing LinkedIn post by a partner at a famous law firm after he uploaded images of the company CEO sweeping the office.

Ms Phelps, who Mr Johnson claims started as the firm’s administration assistant and served as a paralegal before becoming CEO, looks unaware that she is being photographed in one of the photographs.

The second photo was uploaded alongside a remark that said, “Thanks for unloading the dishwasher, too!” Ms Phelps is seen smiling while holding the vacuum to one side.

Mr Johnson captioned the photographs on LinkedIn: ‘I’m a big believer that genuine leaders are those that set the best example, not only in front of the team but also when no one is watching.’

‘It’s pointless to talk the talk and walk the walk if you’re a different person behind closed doors.’

‘This is Kelly Phelps, our CEO… She’s worked hard and has her own family commitments, yet she still comes in early and makes sure we look professional before all the phones start ringing.

‘She’s not your normal CEO, and I mean that in a good way. And, by the way, Kel, thank you for also unloading the dishwasher!’

Colleagues and associates responded underneath his post, ‘Go Kel!’ and, from another woman,’service leadership is always the best.’

‘You’re a rockstar!!!’ exclaimed the male principal of another Brisbane law company.

Last year, I saw a list of principles from a start-up in the United States, and one of them said, ‘We are all floor sweepers.’

‘I loved what that sentence implies, and you are brilliantly showing it: no one is above picking up a broom (… or a vacuum, or emptying the dishwasher).’

However, it appears that a group of female lawyers were not thrilled with Mr Johnson’s appointment, believing that he and other male lawyers should be cleaning up the office.

‘Today, this post has done it for me. How about the guy who submitted this unloading the dishwasher?

‘(To) top it off, he’s receiving compliments on how he’s a terrific leader for the’shout out.’

‘And, while I appreciate he was coming from a ‘positive place,’ do better.’

‘I wish he’d realized that a better approach to show her some respect would be to employ a housekeeper and encourage staff to put their own dishes in the dishwasher,’ remarked another woman lawyer in the Facebook group.

‘I’m sure she’d appreciate not having to do that kind of nonsense on top of her CEO duties.’

‘His comments reflect a lack of understanding of deeper issues, like the fact she works hard to compensate for the negative perceptions attached to being a woman and a mother,’ said one female partner at a law firm.

‘I, a partner, was emptying the dishwasher last year during Covid lockout,’ the lawyer stated.

‘Not because I wanted to demonstrate good leadership, but because none of the guys had ever considered it.’ They probably didn’t observe or realize who was unpacking it.

‘It’s also not exactly value for money for your CEO to be unloading the dishwasher on her salary rather than doing CEO things.’

Travis Shultz and Partners’ website states that they are “compensation lawyers with compassion” who provide “cutting edge expertise without the price tag.”

In a video on his firm’s website, Mr Schultz remarked, ‘some think that our principles are a bit old-fashioned.

‘I guess you could argue there’s something in that. We insist on being a compensation law practice with a community conscience.’

Travis Schultz & partners Community & Brand manager Liberty Moore told Daily Mail Australia that Mr Johnson and Ms Phelps ‘have a great working relationship’ and that his post was in recognition of his appreciation of her work.

‘We have a bit of a concept that we all pitch in,’ Ms Moore said.

‘Trent waters the plants, Travis takes out the waste, we have cleaners but everyone chips in.’

She stated words were Mr Johnson ‘trying to be pure of heart’ about Ms Phelps.

Mr Johnson told Daily Mail Australia that his Linkedin post was ‘a positive acknowledgement of the supporting character of our staff’.

‘It reaffirmed that we all support each other with whatever needs to be done at that moment, irrespective of gender or position,’ he said.

‘If this message offended anyone, I apologize because that was never my intention – quite the contrary, in fact.’

‘Trent’s post only speaks to half of what occurred that morning, as Trent and I worked together to ensure everything was ready ahead of our scheduled appointments for the day,’ Ms Phelps responded.

‘While I was vacuuming, Trent was cleaning the kitchen and hauling out the trash – no one at TSP avoids the office housework!’

‘In our team, your position does not determine your role; there is no work too small or too large, and this is a concept shared throughout our organization.

‘Everyone is willing to roll up their sleeves and get their hands filthy to guarantee we continue to provide the greatest level of professional services to our clients and the community.’