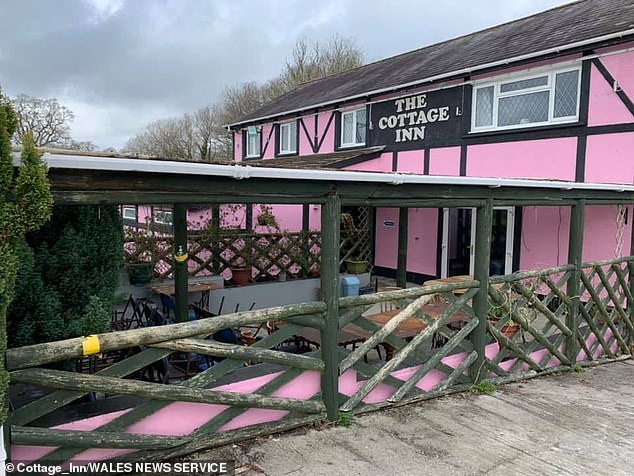 A Welsh pub’s proprietors claim that after anti-English graffiti was sprayed on their structure, they now feel “on edge.”

The Cottage Inn in Llandeilo’s proprietors, Vincent Davies and Fay Bohea, alerted the police after seeing the phrase “Leave English or die” written across their establishment.

The owners said that after viewing the statements and “not knowing how far these guys would go,” they were filled with panic.

On their Facebook page, they posted a picture of the graffiti along with the statement, “What can I say? The words are sufficient.

Locals who were “disgusted” by the statement have offered to help the owners and described it as “shocking” and “not a genuine representation of our town.”

In Llandeilo, Carmarthenshire, the family-run Cottage Inn is a well-liked destination for travelers. It is located 60 miles from the boundary between England and Wales.

However, the bar has before been attacked. The sign had been stolen, and the owners revealed in July that it had cost them £98 to mend and replace it.

Just five months ago, Mr. Davies, 58, and Ms. Bohea, 55, relocated from Lancashire to the rural area of Wales in pursuit of their ambition of operating the local inn.

However, they were horrified to see ominous anti-English graffiti written in black letters on the pub’s vivid pink walls.

The owners said that after witnessing the statements and “not knowing how far these guys would go,” they were left feeling “a bit on edge.”

After seeing the writing on a wall across from the parking lot, Mr. Davies said he called the police.

He said, “We are both from England.” “We realized it needed to be handled seriously the moment we saw the word “death.”

We alerted the police about it, and now it is in their hands.

The owners received a flood of supportive replies from neighbors after publishing the graffiti on Facebook, who claimed that it did not represent the opinions of the neighborhood.

This is horrible to see and is not a real representation of our neighborhood. One mother responded, “We are a kind town and will assist the bar in any way we can.”

‘So disgusted reading this and being new to the region from England, this makes me extremely scared by the sheer hostility in the area displayed to a couple who are simply trying to serve the community and operate a company,’ said another individual who just relocated to Wales from England.

“This is a death threat, and the police ought to take it seriously!” I hope they’re found out and identified.

“This has bothered and saddened me.” I’m very sorry. Another repeated, “This does not represent our lovely country and our kind, giving people.

The couple has received sympathy from their neighbors, who have even offered to assist remove the graffiti.

“Please let us know if you need assistance scrubbing away this dreadful message,” one person added. When you need soap and water, I shall be there.

One more person commented, “Absolutely awful that somebody would put this on our neighborhood bar. Clearly, someone has too much free time on their hands.

Would want to see them being apprehended and cleaning the wall on their hands and knees.

Police from the Dyfed Powys division are now looking into the incident.