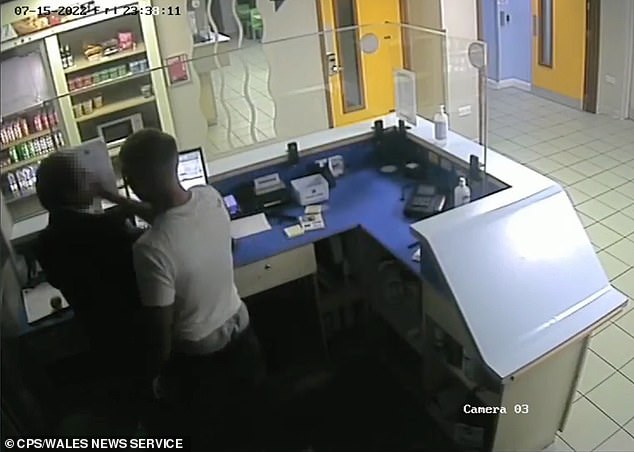 The vicious assault of a violent thug on a hotel receptionist who informed him that there were no rooms available was captured on CCTV.

On July 16, Joshua Leatherland, 23, showed up early with a young lady and requested a room at the Ibis hotel in Newport, Gwent.

He continually requested a room but was informed there were none available despite offering Thundiyil Abraham, the receptionist who was on duty, a £100 bribe and stating that “he would not accept no for an answer.”

As Mr. Abraham lay on the ground, Leatherland repeatedly stamped on his head, punched him, and kicked him, according to surveillance footage.

Mr. Abraham was sent to the hospital with a hairline rib fracture.

The victim then traveled to India for a prearranged vacation where he was forced to pay hundreds of pounds for his own medical care.

According to testimony presented at Cardiff Crown Court, Leatherland yelled at Mr. Abraham before physically attacking him and accusing him of lying.

He hit him in the face, and Mr. Abraham fell to the ground, according to prosecutor Ffion Tomos.

He repeatedly stamped on his head while laying helpless on the ground, according to the witness.

Don’t stomp on his head, his female friend warned.

After that, Leatherland turned on Tia Wills and knocked her to the ground in the hotel lobby.

When the police came, Leatherland, according to Ms. Tomos, was “aggressive and belligerent.”

He attempted to lick the blood off his shoes, she said.

The court was informed that he had seven prior convictions for real bodily injury, violence, affray, and attacking an emergency personnel.

This was an uncharacteristically cowardly assault, according to Judge Tracey Lloyd-Clarke.

Mr. Abraham was working and attempting to support his family while minding his own business.

“You appeared to launch an utterly unwarranted assault just because I told you no,”

He was given a 10-year restraining order and prohibited from going to the Ibis hotel during that time.

»Joshua Leatherland attacked Ibis receptionist for not offering him a room«