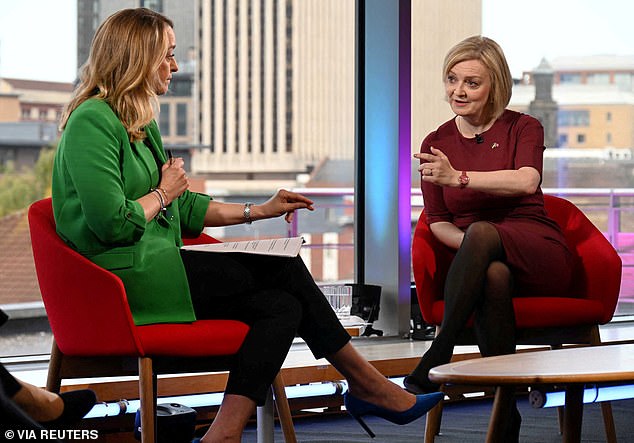 This week ought to have been Liz Truss’s political honeymoon.

The Prime Minister could have fairly felt entitled to a warm welcome at this week’s Conservative Party conference after just one month as the party’s new leader and after delivering the largest tax-cutting Budget in decades.

But not all of the attendees at this family reunion in Birmingham seemed to catch the message.

Michael Gove may have promised to stand down from the forefront of politics, but he has an odd way of demonstrating it.

This week, the former Cabinet minister is scheduled to speak at nine fringe events, and based on his appearances yesterday, none of them are likely to be beneficial to the Government.

He appeared on Laura Kuenssberg’s popular BBC talk program before the conference even began to voice his opinion. Whether on purpose or by mistake, Mr. Gove was standing squarely in Miss Truss’s line of vision. He was prepared to provide a scathing judgment every time she glanced up.

He showed no reserve. He characterized the emergency Budget’s unfunded tax cuts as “unconservative.”

It was time for a “reset” since Miss Truss had committed a number of “mistakes.” “A show of the wrong ideals” was the decision to eliminate the 45p top tax rate.

Even so, would he support the budget? He advised against it, stating, “I don’t feel it’s right.”

Mr. Gove essentially installed himself as the leader of the Truss-critical members of the Tory Party during a five-minute visit.

On the first day of her inaugural conference as leader, the new PM was openly criticized, which did not sit well with her followers.

Michael Gove is the jackal of British politics, according to one insider, who also said that he had twice stabbed Boris in the back before turning his attention to Liz.

Who needs the Labour Party when you have pals like him?

What is he doing now?

Some of the PM’s friends think Mr. Gove is trying to incite opposition to her in the hopes of creating circumstances where Rishi Sunak would be chosen as her successor by Tory MPs without the necessity for a leadership election.

‘If he genuinely believes he can simply glide Rishi into place without a fight then he is even more foolish than I imagined,’ one No. 10 source said of the idea. He has to comprehend that the people won’t forgive the Conservative Party if it dismisses two leaders in rapid succession, according to another supporter of Truss.

Since he announced his intention to miss the conference and allow the new PM “all the room she needs to own the occasion,” Mr. Sunak is not present in Birmingham.

However, the PM’s allies assert that he has sent his outriders to carry out his orders.

All of this is categorically refuted by Mr. Gove, as is a claim made yesterday by former business minister Anna Soubry that he still aspires to run for office himself.

He is just doing what he believes is right, according to a friend of Mr. Gove. I believe he is speaking on behalf of a sizable number of MPs, but he is not working with anybody.

He has previously explicitly ruled out becoming the leader, therefore the notion that he is attempting to do so is absurd.

More ex-ministers are expected to criticize the government in the coming days, according to Downing Street. Last night, George Osborne emerged from hiding to declare that Kwasi Kwarteng’s survival was “touch and go” until he gave in on the 45p top tax rate.

And it’s not only Sunak-ites who are speculating about the likelihood that the next PM will fail.

Some Boris Johnson fans hold out hope that, should Miss Truss falter, he may be summoned back into government.

One of Mr. Johnson’s most fervent supporters and former culture secretary Nadine Dorries was eager to turn the tables yesterday when Miss Truss seemed to blame Mr. Kwarteng for the 45p dispute, claiming it was “a choice the Chancellor made.”

She said on Twitter that one of Boris Johnson’s flaws was that he sometimes exhibited an excessive level of loyalty.

Throwing your Chancellor under the bus on the first day of conference isn’t it, however; there must be a balance. The Truss administration, according to Rachel Wolf, a co-author of the Tories’ 2019 platform, “rejected everything that Boris won the previous election on.”

The reality is that Conservative MPs, who are already concerned about losing their seats, are very anxious over last week’s Budget.

One member in the Cabinet said that Miss Truss had just a “5% chance” of winning the next election and observed, “Things have gone wrong so rapidly.” Finding a route back is quite challenging.

Jake Berry, the chairman of the Conservative Party, issued a warning yesterday that any MP who voted against the 45p reduction would be expelled from the organization. However, his words simply served to embolden more prospective rebels to speak out openly.

In the most closely-watched conference speech by a Chancellor in many years, Mr. Kwarteng will stand to address the conference at ten past four this afternoon.

It had best be excellent if he and Miss Truss were to have any hope of persuading his dissident MPs, much alone the general public and financial markets.