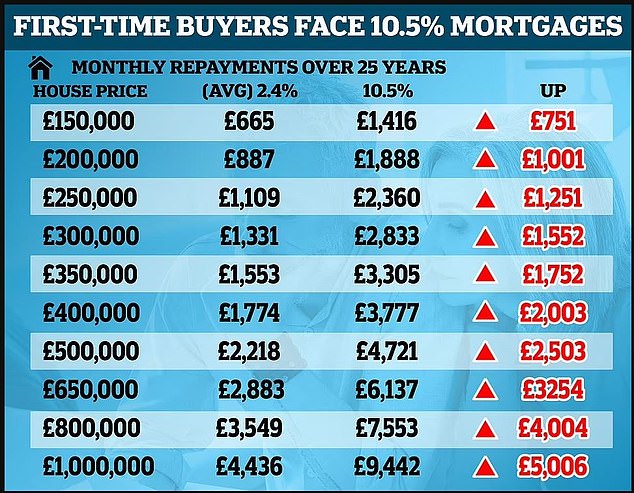 The lender’s rates had previously ranged from three to four percent, but a notification sent to brokers on Sunday morning stated that owing to intense demand, they will now be between four and six percent.

After rival institutions like HSBC and Santander briefly halted mortgage lending last week after the Pound fell, NatWest is reportedly finding it difficult to keep up with increased demand, according to The Guardian.

NatWest is said to have got five times as many calls as usual after first setting rates lower than those of its rivals.

Given the market chaos, UK banks are finding it more and more difficult to appropriately price mortgages; on Thursday, 40% of mortgage products were taken off the market.

NatWest said in the memo to brokers: “We have stayed in the market, but given the current market circumstances, we must execute significant adjustments to our product portfolio.”

It happens at a time when the typical UK property is now seven times more expensive than the average income due to a housing bubble brought on by the Covid epidemic.

Despite analysts’ predictions of a price decline of 10% to 15%, rising interest rates are now projected to make mortgage payments unaffordable for the majority of people.

According to Nationwide’s research, mortgage payments now account for 40% of homebuyers’ monthly expenses, according to The Times.

The statistics also showed considerable regional variations throughout the UK, with mortgage payments for homes in London accounting for 64.4% of monthly expenses.

In contrast, it is much lower in the north, at less than 26%.

Additionally, the price range is 11 times the average London wage and less than 5 times in the north.

The building society’s chief economist, Robert Gardner, told the newspaper that “the typical mortgage payment as a share of take-home pay has been pushed typically well above the long-run average” due to “the significant increase in house prices in recent years, together with the significant increase in mortgage rates since the start of the year.”

After a young first-time home buyer stated the best offer she could find was now 10.5 percent, a spike of six percent in a week, she challenged a government official on Question Time last week about the market volatility caused by last week’s mini budget.

Due to the lenders’ withdrawal of offers after the government’s short budget, first-time buyers are finding it difficult to finance mortgages. Since last week, at least 1,600 items have been taken off the market.

“I want to know what the strategy is regarding mortgages,” the buyer Rabia remarked.

“My starting interest rate would be 4.5 percent,” I was informed. Today I was informed that the lender had withdrawn that offer and that the best deal I could currently receive was about 10.5 percent.

I’ve been advised that you must look into submitting your application right now since if you don’t, the lenders could even withdraw these offers.

I don’t believe I can currently afford to secure a mortgage as a first-time buyer.

MailOnline has also received letters from anxious readers who worry that their mortgage arrangements may be cancelled before they can close on their dream houses or refinance their existing properties at a competitive rate.

According to North Wales real estate agent Ian Wyn-Jones, four mortgage arrangements have fallen through this week alone as lenders cancel their mortgage offers in anticipation of rising interest rates.

People want to list their homes for sale because they can’t pay their mortgages, according to Mr. Wyn-Jones. It’s a terrible predicament.

We have customers calling in the next weeks who want to sell right now because their mortgage rate has changed and they want to go.

People are investing since they don’t know what will happen in the future, he said.

A housing price catastrophe in Britain is imminent, according to analysts, as more than two million people deal with skyrocketing mortgage rates that will drive many of them to sell.

Mortgage anxiety is intensifying as people worry they may be unable to make increasing repayments and end up losing their houses due to projections of a 15 or even 20 percent drop in housing costs, which would knock £58,000 off the average home price.

Grant Shapps, a former cabinet minister for the Conservative Party, has joined the rising backlash against Ms. Truss’s tax proposals and dubbed her decision to eliminate the 45p top rate as “politically tin-eared.”

The Prime Minister and Chancellor Kwasi Kwarteng have been accused by Mr. Shapps, who served as Transport Secretary under Boris Johnson, of putting “all their chips on red” in the belief that tax cuts would spur economic development.

As he threatened to vote against the mini-budget, his fellow ex-cabinet minister Michael Gove had previously criticized Ms. Truss’s proposals to finance significant tax cuts with greater borrowing as “not Conservative.”

An important Tory party member and former government official told how the £45 billion in tax cuts, especially the elimination of the highest income tax rate, had him “profoundly” disturbed.

However, as the Conservative conference gets started in Birmingham, Tory chairman Jake Berry has threatened to expel any rebels before a Commons vote on the measures, escalating a dispute.

While Mr. Shapps firmly believed in reducing taxes, he wrote in The Times that now was not the time for “huge handouts to those who need them least.”

He said, “This politically tin-eared cut has managed to alienate practically everyone, from a sizeable portion of the Tory parliamentary party taken aback to the City merchants who would really profit. It is not even a significant revenue generator and scarcely a priority on the prime minister’s to-do list.

‘Why? Not the least of which is that it is being paid for with borrowed funds whose payback has not yet been addressed.

Mr. Kwarteng’s mini-budget was also characterized by him as “an exercise in what would be dubbed single-entry book-keeping: plenty of expenditure on one side and a blank column on the revenue side.”

“Tory governments aren’t meant to do this type of stuff,” Mr. Shapps added.

Former health minister and ex-nurse Maria Caulfield said that she was unable to accept the elimination of the 45p rate when nurses were having financial difficulties.

If Mr. Berry and the party “don’t want this working class MP, fair enough,” she said in a tweet.

Former deputy prime minister Damian Green also issued a warning that the Tories will lose the next election if “we wind up branding ourselves as the party of the affluent” as tensions inside the party rise.

Ex-chancellor George Osborne said on the Andrew Neil Show that it is “touch and go” if the Chancellor would survive the backlash and that if Mr. Kwarteng’s address on Monday is not well received, it will be “curtains” for him.

Mr. Gove earlier praised the Prime Minister for admitting she had made errors with the mini-budget, but he said she had a “inadequate realization” of the severity of the issue.

He said that eliminating the 45 percent income tax rate for the wealthiest individuals was a “display of the wrong ideals” and urged Ms. Truss to reverse her position.

As Conservative opponents consider staging a coup, the MP even said he may vote against the proposals in the House of Commons, adding, “I don’t feel it’s proper.”

Ms. Truss previously acknowledged that she should have done a better job of “setting the groundwork” for the measures that provoked a reaction on the financial and mortgage markets.

But according to Mr. Gove, “the top of Government continues to have an insufficient realization of the extent of change necessary.”

According to him, there were two significant issues with the proposals announced by the Chancellor and Prime Minister on September 23.

The first is the obvious danger involved with funding tax cuts with borrowed money, Mr. Gove stated. That isn’t conservative at all.

The second, according to him, was the decision to lower the highest income tax rate and eliminate the bonus ceiling for bankers “at a time when people are suffering.”

Mr. Gove is well-liked by Tory MPs and has extensive experience in administration, having served in the cabinets of Boris Johnson, Theresa May, and David Cameron.

He stated that he was not in charge of a planned uprising of Conservatives, but he risked losing the party whip if he opposed the tax cuts.

On Sky’s Sophy Ridge, asked Mr. Berry concurred on the Sunday program when asked if a mutiny would lead to harsh response.

Later, he indicated in a podcast interview with The Telegraph that a free vote enabling Conservatives to vote according to their consciences should “absolutely not” take place, but he added that he was “confident colleagues would back the Government.”

Using the Telegraph podcast, Mr. Gove urged the Prime Minister to abandon her ambitious tax and borrowing plans in order to avert a mutiny, which he stressed he was not planning.

I’ve never voted against the Conservative whip, so I want to make sure that we can have a respectful discourse about priorities, he said, adding that there was a “opportunity for a course correction and a reset.”