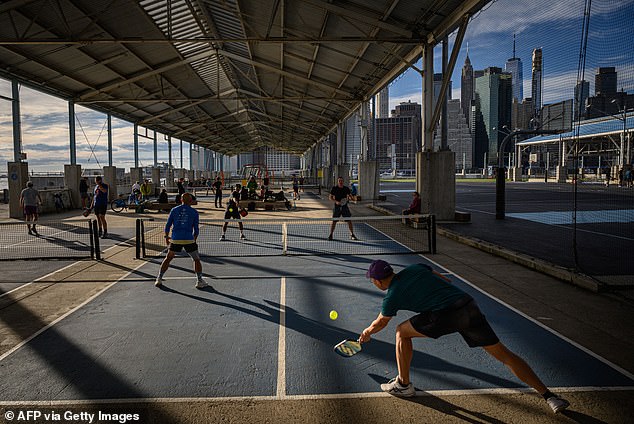 The racquet sport fad that has swept the nation is causing community strife on the streets of New York, where neighbors allege that pickleball fans are stealing playground space from youngsters.

The Kardashians, Leonardo DiCaprio, Stephen Colbert, Bill Gates, and George and Amal Clooney are among the many celebrities who have established a large fanbase for the sport.

Tom Brady and LeBron James have invested in the inaugural season of Major League Pickleball, which began last year.

In recent years, Kim Kardashian and her famous siblings are among the celebs who have picked up a Pickleball paddle to try out the sport’s rising popularity.

Bill Gates, co-founder of Microsoft and philanthropist, has long been a fan of the sport founded in 1965 by three fathers in Washington state.

The sport was established in 1965 on Bainbridge Island, Washington, by three fathers attempting to amuse their children while on vacation.

Bill Gates, who owns a house on Lake Washington in Medina, Washington, has been an avid follower of the sport for many years.

The billionaire posted an Instagram video of himself explaining the rules with the remark, ‘I began playing this obscure sport with a strange name fifty years ago. It is currently the rage.

The sport was mostly practiced in retirement villages and by the elderly for many years.

Even now, there are approximately five million gamers in the United States. According to the Physical Activity Council, in contrast, over twenty million Americans took up tennis in 2020 alone.

Ellen Degeneres has shared her passion for pickleball with tens of millions of her fans and followers. Stephen Colbert is also a vocal admirer of the sport and is making a program about it with Funny or Die.

The fact that sports superstars have begun investing in the newly formed Major League Pickleball is more evidence that the sport is here to stay.

Residents of New York City have become increasingly irritated by the area pickle ballers use on tennis courts and local playgrounds.

In New York’s West Village, though, worried residents have vented their ire on the neighborhood app Nextdoor on the growing popularity of the activity.

“Anyone else sick of Pickleball near their home?” a visibly upset individual asked.

The sound is so piercing and unavoidable that I have PTSD whenever I hear a ball in the city.

Even the children who attend the school next door (where the video is filmed) have their recesses dominated by pickle ball players. The children have nowhere to play,’ the user added.

The initial post displayed a brief video of dozens of adult pickleball players using practically the entirety of a neighborhood playground, while a group of children huddled together in a very small portion of a public park with nowhere to play.

Mark Borden, a writer and father of two, recently created a change.org petition requesting that pickle ball players be removed from Seravalli Park in the West Village.

“Pickleball players appear to have a lack of awareness,” he told the New York Times.

‘They are blinded by their passion for the sport,’ he said, referring to the players as the ‘lantern flies of the sports world’ – an invasive species that overruns and destroys a natural habitat.

Local West Village parents started a petition to remove pickle ball from a playground where their children had much less access due to the sport’s popularity.

It has been suggested that New York City pickle ballers lack ‘knowledge’ of how many public resources they have recently occupied, from slapping whiffle balls at all hours to preventing children from utilizing playgrounds.

A diagram depicts how pickleball courts have taken over Horatio park in the West Village.

Due in great part to the scarcity of developed pickleball courts, the current conflict arises.

Even though there are a number of public tennis courts in New York, tennis players are generally opposed to the concept of sharing.

In addition to other challenges, tennis players find the smaller pickleball court’s different-sized nets and additional chalked-on lines to be confusing.

During a springtime debate in Exeter, New Hampshire regarding the conversion of certain tennis courts to pickleball courts, tennis legend Martin Navratilova weighed in on the issue.

She stated on Twitter, “If pickleball is so popular, let them build their own courts.”

On September 29, 2022, people play pickleball at a public court in Brooklyn, New York.

Despite the possibility that public spaces are not the way forward for the sport, continuous expansion appears likely as celebrities with millions of dollars and corporations become involved.

A consortium of Florida real estate developers will spend $180 million to construct 15 private pickleball clubs, according to a New York Times article.

The project will contain a 33,000-square-foot facility in Sarasota, Florida, with twelve indoor tennis courts, a café, and a retail store.

A consortium of real estate developers are investing $180 million in the construction of 15 private pickleball clubs in Florida, including a 33,000-square-foot facility in Sarasota with 12 indoor courts, a cafe, and a retail store.

As more and more capital invests in pickleball, the market for the accessible sport is likely to become more positive.

»Invaders in children’s parks! Pickleball is sweeping the US«