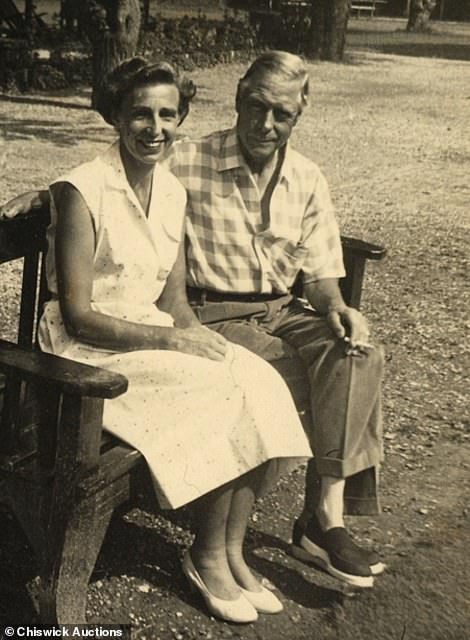 Edward VIII continued to live a kingly lifestyle after relinquishing the throne to marry the woman he cherished.

Shortly after abdicating in December 1936, Edward married American divorcee Wallis Simpson and spent the most of his time attending parties and living in luxury in France and the United States.

Now, never-before-seen pictures that are for sale reveal one of the many vacations that Edward and his wife Wallis Simpson took in the 1950s.

The photographs, which are part of a collection of letters and documents originally owned by the Earl of Dudley, a friend of the royal couple, are believed to have been taken in Venice.

The goods are anticipated to sell up to £8,000 at Chiswick Auctions’ sale in West London tomorrow.

The letters in the sale reveal the busy vacation schedule of Edward and Wallis, who became the Duke and Duchess of Windsor following the abdication of the former king.

Edward said to the Earl of Dudley that after spending two weeks in Palm Beach, Florida, he planned to spend a week playing golf in White Sulfur Springs, Virginia, before sailing to Europe and then traveling to Britain.

Other letters reflect Edward’s political leanings, with one expressing his support for then-Prime Minister Winston Churchill and another describing his dismay at the Chinese communists’ forced withdrawal of US General MacArthur from North Korea during the Korean War.

Unseen photographs of the former King Edward VIII and his wife Wallis Simpson on vacation in Venice in the 1950s are now available for purchase. Above: Edward sits with a buddy (left); Wallis is spotted wearing a short skirt on the beach (right).

The majority of the new photographs depict Wallis posing with groups of unidentified acquaintances. In one, she is seen wearing a short skirt on the beach.

The scandal between Wallis Simpson and King Edward VIII shook the nation.

Wallis meets Prince Edward after being introduced by her friend Lady Furness in January 1931.

1931-1934 – The American divorcee and the heir to the kingdom attend numerous parties together.

Wallis admits that she and Edward are no longer just friends in August 1934, after joining him on a cruise.

January 1936 – King George V dies. Edward requests that Wallis watch the proclamation of his accession from St. James’s Palace alongside him.

August 1936: The couple enjoys an Adriatic Sea excursion with friends. Their relationship is described in the American press.

Wallis was known technically as the Duchess of Windsor, although she was not permitted to bear her husband’s title of “Royal Highness.”

Another photograph has Edward on a seat with a female companion.

Edward wrote to the Earl of Dudley from New York in May 1951, less than one month after the publication of his ghostwritten memoirs.

In order to reach my publisher’s deadline, I was out of circulation until my book was published on April 1, and I had to let my personal correspondence fall by the wayside along with everything else.

Disclosing his lengthy travel plans and Wallis’s medical condition, he continued: ‘Then, just as I finished correcting the final galley proofs, the Duchess goes to the Medical Center for a normal check-up, and the doctors decide to perform a minor operation.

It was comparable to “Kayoing” a groggy boxer. She has made a full recovery, but she still needs to take it easy.

“The physicians wouldn’t allow her to travel to Florida, so she sent me to Palm Beach as a solitary bachelor to spend two weeks with Bob and Anita Young.”

“We are leaving tonight to watch the Kentucky Derby and will then spend a week playing golf in White Sulphur.” The ‘Queen Elizabeth’ sails for Europe on May 24, and as I anticipate traveling to Great Britain in early June, I look forward to seeing you and Laura again soon.

In a separate letter to William Ward, 3rd Earl of Dudley, Edward discussed the American reception of Churchill’s 1951 speech to the conservative Primrose League at the Royal Albert Hall.

The Duke of Windsor also expressed his dislike for spending the winter in New York, admitting that he preferred Palm Beach’s warmer climate.

He thanked the Earl for hosting a shooting party in his third letter. He wrote: “Wednesday’s shoot was a lot of fun and enjoyed by all of your guests.

The Duchess is extremely appreciative for the four brace of pheasants which we are serving at a dinner party, as you are a wonderful host who always gives your guests a good time.

The majority of the new photographs depict Wallis posing with groups of unidentified acquaintances. In one, she is seen wearing a short skirt on the beach.

On vacation, Wallis is seen posing for a group photo with her friends. It is believed that the photographs were taken in Venice.

Wallis was seen wearing a pussybow and pearl necklace in a similar color photograph, revealing her sense of style and affection for jewelry.

Edward wrote to the Earl of Dudley from New York in May 1951, less than one month after the publication of his ghostwritten memoirs. In order to meet my publisher’s deadline, I’ve been out of circulation until my book was published on April 1, and I’ve had to let my personal correspondence and everything else fall by the wayside.

He thanked the Earl for organizing a shooting party in his third letter. He wrote: “Wednesday’s shoot was a lot of fun, and all of your guests enjoyed it.”

Wallis wrote to the Earl of Dudley as well. In one letter (preceding), she complimented him “for being so kind to my “Romance” and preventing him from being lonely.”

Wallis wrote to the Earl of Dudley as well. In one letter, she complimented him ‘for being so kind to my ‘Romance’ and preventing him from being lonely.’ She added, “We shall miss you at Biarritz… we may go to Austria to visit friends for a few days.” This was just another sign of her and Edward’s glittering social calendar.

Wallis wrote to the Earl of Dudley as well. She praised him in a letter for being so kind to her “romance” and for preventing him from being lonely.

She added, “We shall miss you at Biarritz… we may go to Austria to visit friends for a few days.” This was just another sign of her and Edward’s glittering social calendar.

In addition, she told him, “I actually don’t know anything about your romantic life, which, as you know, usually fascinates us.”

The letters have always been privately owned, and the seller is unknown.

Auctioneer Valentina Borghi told MailOnline that the photographs depict Edward and Wallis with close pals. They frequently traveled on vacation with their numerous acquaintances.

The Duke and Duchess of Windsor following their June 1937 wedding at Monts, France. The couple insisted on proceeding with their marriage despite the fact that it would require Edward to abdicate the throne.

They didn’t really go on vacation by themselves. Always surrounded by numerous friends and relatives.

She also stated that the letters between Edward, Wallis, and the Earl of Dudley “offer a glimpse” into the couple’s extravagant lifestyle.

They spent months in New York, Palm Beach, Florida, and other locations. They were renowned for partying throughout the entire year. She stated that they never spent too much time in the same location.

Edward’s connection with Wallis, who had already been married twice, caused a scandal when the news initially broke.

His proposal to marry her while she was still going through divorce processes with her second husband triggered a constitutional crisis that led to Edward’s decision to abdicate.

After his abdication, his brother, the new King George VI, named Edward the Duke of Windsor and accorded him the appellation of His Royal Highness.

However, after their 1937 marriage and intention to stay in France, Edward was displeased by the King’s decision to deny Wallis the title of Her Royal Highness via Letters Patent.

Edward’s brother provided him with a tax-free stipend that contributed to his and Wallis’ extravagant lifestyle. Additionally, he made money through illegal currency trading.