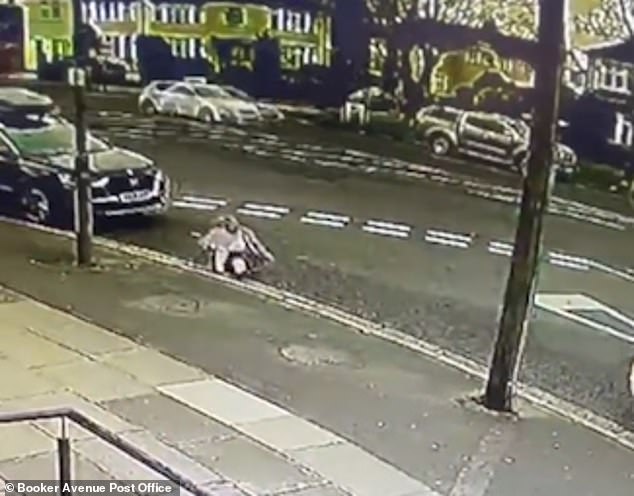 Police are hunting a carjacker who dragged a nun along a road while trying to steal a car.

Sister Louise Gilbey had her car stolen by a yob in Liverpool on April 11 when she got out to put a letter in a post box.

CCTV footage captured the moment a man opened the door of the woman’s Hyundai and got in while she was only metres away.

She told ITV News: ‘I blame myself for this, forgetting for a brief moment that I had left the keys in the car. This car is my lifeline, I wasn’t thinking, I was just desperate to save it.’

She added: ‘I don’t wish him any harm. I just hope he doesn’t use the car to hurt anyone. It could have been a lot worse for me. I would love him to find a different way of life, he can’t be happy having to do stuff like that.

The victim had left her car less than 30 seconds earlier and ran back when she saw the thief get in.

She managed to open the door and tried to pull him out but he began reversing, hitting the car behind and knocking her over.

Merseyside police are now appealing for information, dashcam footage and witnesses after the dangerous incident in Allerton.

They were first alerted to the theft of the blue Hyundai from outside Booker Avenue Post Office on Holmfield Road.

Police officers attended and searched the area but were unable to find the man in dark clothing caught on CCTV or the vehicle he stole.

Thankfully police confirmed that the elderly woman who tried to stop her car being stolen did not suffer any injuries.

Sergeant Michael Fletcher said: ‘Although some of the footage is grainy we believe that there is someone out there who would recognise the man pictured.

‘I would ask anyone who recognises him or has any information which could assist our investigation to contact us as matter of urgency.’

Meanwhile, Inspector Paul Rannard said: ‘The theft of any vehicle is a despicable offence which has the potential to leave the rightful owner without means of getting to work, to shop and to enjoy their day to day lives.

‘It was only by sheer good fortune that the victim was not injured during this incident and we’re aware of video footage circulating online.

‘I know that the vast majority of people in our community will be appalled when watching this and I urge them to help us trace the person responsible so that we can bring them to justice.

‘Anybody who was in the Booker Avenue area yesterday morning who witnessed anything or who has any information then please let us know.’

He continued: ‘Similarly if you were driving in the area and have dashcam footage, please review it and let us know if you see a blue Hyundai being or anything or anyone suspicious. All information you hold could be vital to our enquiries.

‘Finally I would urge everyone to be vigilant and lock your vehicle when parked so it can’t be taken by opportunistic thieves. You can find more information and advice around stopping vehicle theft on our website.’

»Hunt for carjacker who dragged Irish NUN along road«