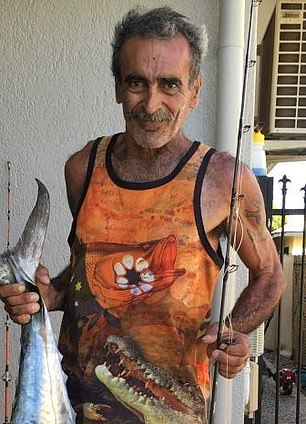 The shooter who went on a shooting rampage across Darwin while under the influence of drugs and killed four people will remain behind bars for the rest of his life with no possibility of parole.

In November, Benjamin Glenn Hoffmann entered a plea of guilty to the June 4, 2019, manslaughter of Nigel Hellings, 75, and the deliberate death of Hassan Baydoun, 33, Michael Sisois, 57, and Rob Courtney, 52.

The 48-year-old was given three life terms for the three murders and 15 years for manslaughter on Thursday in the Northern Territory Supreme Court, with Justice John Burns declining to set a parole date.

Hoffmann was also found guilty on six more counts, including one count of threatening to murder, narcotics possession, and three counts of recklessly endangering life.

Since the Port Arthur massacre in 1996, the killing spree was the largest mass shooting in which no family members were involved.

Hoffmann, who was under the influence of methamphetamine, shot the four men dead while looking for Alex Deligiannis, whom he thought had abducted Kelly Collins, his ex-girlfriend.

At the Palms Motel in the heart of Darwin, he used a double-barreled shotgun to shoot Mr. Baydoun four times.

About 800 meters away, Mr. Hellings was shot and killed through the front door of his apartment building.

Mr. Sisois, a friend of Hoffmann’s, was the next victim. He was shot in the head in the parking lot of the neighboring Buff Club bar and eatery.

Mr. Courtney was killed roughly 2.5 kilometers away at Darwin Recycling in an industrial yard.

He was discovered with 69 wounds, including a gunshot wound, many blunt force injuries, and 36 stabbing and slicing wounds.

Three of the places have previously seen frequent visits from Mr. Deligiannis.

Early in 2019, Hoffmann and Ms. Collins met at a drug recovery facility where they made arrangements to live together after finishing the program.

But two weeks before to the shootings, Ms Collins informed Hoffmann through text that she had restarted methamphetamine use and declared her love for Mr. Deligiannis.

Hoffmann already testified in court that the news completely rocked him.

He admitted before Justice John Burns that “things with Kelly spiraled out of hand.”

Hoffmann said that a gang of men had been pushing Ms. Collins into prostitution, giving her narcotics, and raping her.

He claimed, “She had individuals following her who were also stalking me.”

He said in court that the couple enjoyed a “natural” relationship when they were drug-free at the treatment facility after he was released from jail and had intended to live together, but that their vulnerability had been exposed by her relapse.

“I tried to protect her. He claimed, “I worried for my life and the lives of my girlfriend.

Hoffmann thought Ms. Collins, an ex-prostitute, was in danger on the day of the murders and would probably have suffered bodily damage.

“I saw vivid pictures of Kelly being kept captive without her will. The previous evening, I was certain that she and I had both been poisoned, he continued.