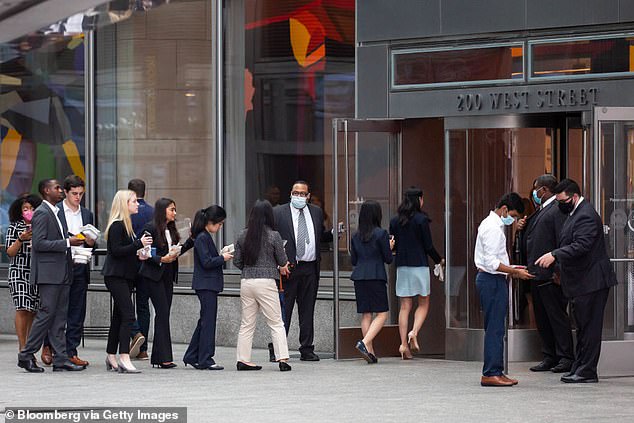 After giving out generous bonuses and high wages during the recession, Goldman Sachs has started a wave of mass layoffs of employees around the US – anticipating a projected decline in revenues as the economy slows.

According to a source, the Wall Street giant’s investment banking business started the initiative last week, sacking hundreds of bankers in locations throughout the world in an attempt to cut costs and get rid of underperforming workers.

The cull, according to sources, impacted workers at all levels, with senior-to-midlevel employees, such as numerous senior partners and vice presidents, bearing the brunt of the endeavor.

Within the area of technology, media, and telecommunications of the prominent bank, over a dozen bankers were sacked.

Layoffs were allegedly made in the consumer retail, health care, and industrials businesses. This was expected after the company indicated back in July that it wanted to freeze recruiting and reintroduce yearly performance assessments.

After experiencing a short commercial boom during the epidemic, the revelation was made as the bank reported a notable 40 percent decline in profits this year alone.

This led Goldman management to delay their customary layoff procedure at the time and provide a wide range of opulent benefits in an attempt to keep employees happy in the face of the industry’s rising labor demand.

Prior to the epidemic, Goldman eliminated 1 to 5 percent of its employees per year from its workforce.

Insiders claim that the number of layoffs in this round is at the lower end of that range, but it still indicates a significant shift from the company’s stance less than a year ago, when it was raising pay and giving out benefits.

According to a person familiar with the inner workings of the investment business, the alleged dismissals—which were first reported by the site on Friday—have been “a rough week.”

An source also said that workers in the company’s technology, media, and telecommunications department at its New York and San Francisco departments ended the day with pink slips.

According to insiders, the reduction also had an effect on the consumer retail, healthcare, and industrial sectors.

One source said that the cull had an impact on all talent and that employees at all levels, from its youngest bankers to its managing directors, had lost their jobs.

The precise number of staff members that were let go was not immediately known from the early reports, although it seems to be in the hundreds.

According to an insider, the huge bank’s management planned the layoffs carefully to avoid firing too many senior or young personnel.

It requires balance. The insider said that although senior bankers are expensive, they are the ones that bring in more business, so you can’t fire too many of them. Junior bankers are less expensive, but if business is sluggish as a whole, they won’t have anything to do.

At the conclusion of the second quarter, the company had 47,000 workers, meaning that a 1% workforce decrease would result in the loss of 500 bankers.

Prior to the pandemic, Goldman eliminated 1 to 5 percent of its underperformers each year; sources have subsequently indicated that this round is on the lower end of that range.

However, the company’s various abroad locations were also hit hard, with around a dozen bankers at Goldman Sachs’ London office also losing their jobs, a source told the Financial News.

More than two dozen bankers have been sacked as a consequence of the recent cut at the company’s expanding China division, which only last year hired 400 personnel to approximately treble its employment, according to Reuters.

Employees removed from the company’s TMT team were reportedly asked onto conversations with national-level group leaders, including

This individual stated that other partners could have taken part in the leaving discussions as well.

The Wall Street stalwart’s representatives seemed to suggest in remarks to multiple sources as word of the firings circulated over the weekend that, if true, the alleged firings would signal a return to business as normal at the major bank.

A spokeswoman informed The New York Post that “every year we do a strategic evaluation of our resources and adjust personnel to the current operating situation.” We continue to be adaptable while carrying out our aims for strategic development.

Following the publication of this piece, DailyMail.com contacted Goldman Sachs’ public relations division to inquire more about the alleged firings from Monday night.

The huge bank and its CEO David Solomon, who posted second-quarter profits of $2.93 billion in June, reported a sharp decline in sales, prompting the resumed layoffs.

Some people, especially executives who had profited from the epidemic, were taken aback by the figure since it was much lower than the bank’s yield from the second quarter of 2021, when it brought in $5.49 billion.

The huge bank’s management used a number of steps to protect their bottom line during the steep decline, which several employees criticized as miserly.

The bank caused controversy in April when it stopped providing free transportation to and from work as well as free breakfasts and lunches for staff.

At the time, a source was quoted as saying, “Of course they took the coffee away, but I haven’t really had time to worry too much about it since I have been so busy since Labor Day.”

The employee also said that free drip coffee was still available in the 11th floor lobby, but it was of lower quality and more harder to get to than the original full-service coffee machine.

They also observed that Goldman seemed to be attempting to sweeten the unfavorable situation by providing bankers with free cupcakes on their first day back after Labor Day.

In May, the business once more appeared to try to appease workers when it offered senior employees unlimited vacation time.

At the time, some critics criticized this move as a covert attempt to encourage under-pressure employees to continue working long hours while management sought to boost bottom lines.

Goldman informed its personnel in August that it would discontinue pandemic precautions, such as the acceptance of remote work, and that employees would henceforth be required to work five days per week.

The declaration marked the end of many months of eliminating accommodations provided to workers as a perk for coming into the office when they weren’t compelled to do so.

Not just Goldman but other banks are debating what to do with their staff and headquarters.

Even though official policy only calls for junior employees to be at their desks three days a week, JP Morgan CEO Jamie Dimon allegedly informed senior personnel that he wanted them to be there five days a week.

However, Citigroup CEO Jane Fraser continues to forbid Zoom conversations on Fridays and only requests that staff members come into the office a few days a week rather than making them work a full five days.

In the next weeks, the bank will announce its office plans, according to Bank of America CEO Brian Moynihan.