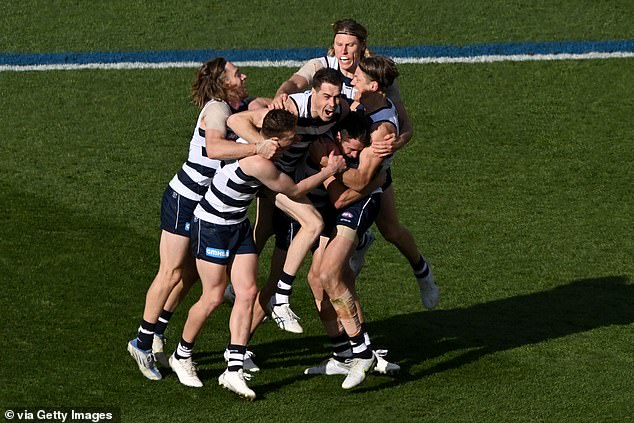 In a powerful, one-sided AFL Grand Final, Geelong won their tenth championship, leaving fans feeling both thrilled and appalled by the show’s entertainment.

The Cats started the game with a shocking 41-6 first quarter and never looked back, leading 62-26 at the break before cruising to victory in the second half.

Tom Hawkins, a talented full forward for Geelong, led the attack with two goals in the first quarter as the Sydney Swans seemed hopelessly outmatched as Geelong’s formidable front line tore them apart.

With a spine-tingling setlist that included all of his greatest songs as well as a version of John Farnham’s The Voice, superstar Robbie Williams got the day off to a flying start.

As the children of the cricket star Shane Warne sat in the MCG stand that now bears his name, he also paid respect to him.

Later, Delta Goodrem joined him for a duet of his song Kids.

The best pregame I’ve ever seen, a spectator said. Robbie was made for that environment. Great way to start the day.

Another person said, “Robbie and Delta singing together was the finest entertainment to date.”

Since “Kids” was on the set list, there were rumours that Kylie Minogue might show up unexpectedly, but she was nowhere to be seen.

In the audience at the renowned sports venue, Williams referred to his pal Warne as “Australia’s greatest rock star” as the cameras switched to his distraught son Jackson.

The pop artist also gave a moving rendition of John Farnham’s iconic song You’re the Voice as an homage to the musician, who was recently stricken with cancer. The performance had the whole audience singing along in unison.

Unfortunately, the half-time show didn’t get a great response from the audience. Viewers criticised the most inclusive and progressive halftime performance in AFL Grand Final history, saying it was “worse than Meatloaf’s” terrible 2011 appearance.

Some displeased spectators criticised the decision to include Australia’s First Nation artists during the halftime performance of the AFL Grand Final in Melbourne on Saturday as a “woke” gesture made to “check boxes.”

G Flip started off the show with a thunderous drum solo and subsequently returned to sing Jet’s Are You Gonna Be My Girl.

A magnificent didgeridoo solo that seamlessly transitioned into Goanna’s Solid Rock was used to introduce Christine Anu and Emma Donovan.

While many viewers were undoubtedly pleased to see marginalised minority groups given the spotlight, others referred to it as “woke” and complained that the voices weren’t strong enough.

It seemed like they were trying to be awake throughout the halftime performance, which was quite horrible. Was I the only one? One voiced their displeasure.

‘Awful halftime performance at the @AFL championship. more about checking boxes than enjoying yourself! We hear lectures about it entering sport on a daily basis,’ another user tweeted.

This woke halftime performance was awful. One yelled, “If you’re going to go woke, at least be decent.”

“The AFL halftime show is all about promoting indigenous politics.” The bunch is disgusting. So predictable, another one commented.

Compared to prior Grand Final halftime presentations, it was quite a difference.

Birds of Tokyo, an alternative rock band, played with the West Australian Symphony Orchestra in 2021.

Sheppard has played with the Queensland Symphony Orchestra before that.

AFL fans earlier found out they couldn’t watch the greatest day in football since Channel 7 chose not to webcast the 2022 grand final via digital platforms.

Angry fans were cut off by megastar Robbie Williams during the pre-game entertainment performance while trying to watch the final between the Sydney Swans and Geelong Cats on the digital platform 7Plus.

Instead, they got to watch a best-of compilation of Border Force Australia videos.