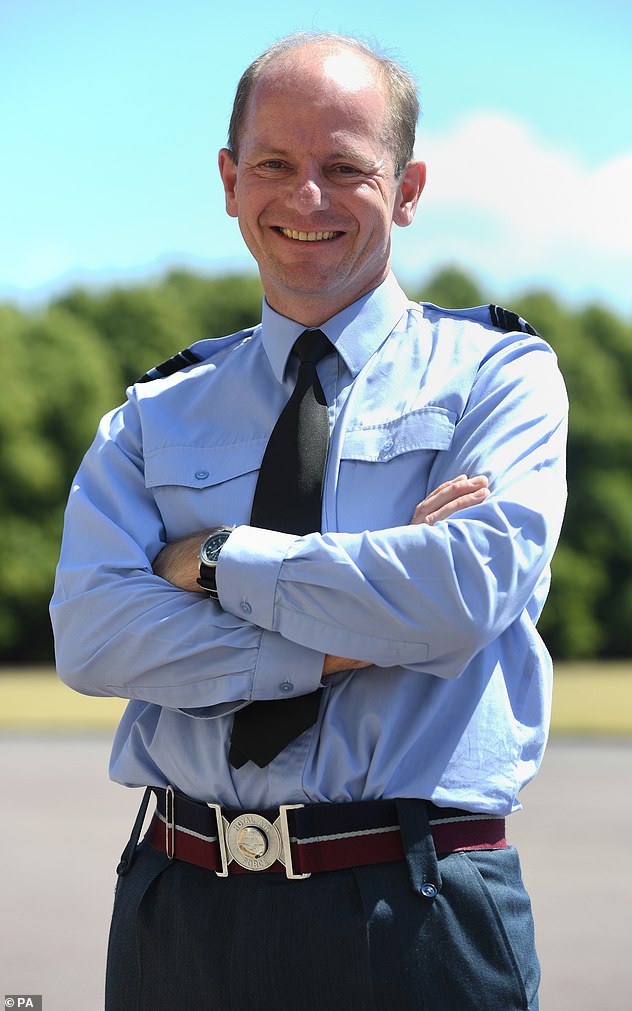 Today, allegations surfaced that a female member of the scandal-plagued Red Arrows resigned the display squad due to bullying and harassment.

It is believed that the officer, in her early 30s, joined the elite aviation squad earlier this year.

But after only six months, she submitted a complaint with the highest military command about ‘uncomfortable’ behavior.

A source within the RAF reported that the female aviator had criticized the ‘toxic’ atmosphere within the renowned air unit.

The revelation is the latest bombshell to rock the Red Arrows, which has been rocked by charges of widespread sexual harassment, assault, misogyny, and bullying.

In August, it was reported that numerous young female recruits were among the over 40 troops who provided 250 hours of testimony to a “protracted” investigation into the “toxic pocket” of the RAF.

The pride of the RAF, the Red Arrows display team, has been shaken by scandals involving allegations of bullying and harassment. Jets are pictured at the Jersey International Airshow in 2014.

In the worst controversy in the 57-year history of the premier aerobatic team, an anonymous source stated that young women in the 130-member squadron were like “new meat.”

Four soldiers are now the subject of an official investigation by the RAF and might be terminated as a result of the allegations.

A source within the Royal Air Force informed The Times, about the latest development in the tragic affair, that despite the fact that events have transpired since the last article broke, the toxic behavior is still occurring and not enough is being done to stop it.

Former intelligence officer Philip Ingram, a member of the Independent Defence Authority that provides support to military members, stated that the most recent allegations were damning and raised significant issues about the unit’s chain of command.

It’s a simple command failure. There is toxic leadership that is exacerbated by a sense of elitism due to the organization they belong to,’ he told MailOnline.

“Whenever they find someone who, for whatever reason, doesn’t fit or who they believe doesn’t fit, they force them to leave… They are harming human life.

This instance arises just days after the important Defence Committee of the British Parliament announced a fresh call for evidence in its ongoing probe into women in the armed forces.

Now, the committee intends to question Sir Mike before Christmas over a “range of topics” pertaining to the RAF, which is believed to include the Red Arrows incident.

The Defence Committee is preparing for its upcoming November 8 hearing on women in the armed forces.

It follows Tuesday’s startling disclosure that up to 30 former RAF pilots were paid by China on salaries of £250,000 to instruct Chinese top gunners on how to shoot down Western aircraft.

The team, which normally consists of nine pilots labeled Red 1 through Red 9 and their supervisor, Red 10, along with a ground crew and commanding officer, has been reduced to a skeleton crew of seven. In January, Red 8 Flight Lieutenant Damon Green, pictured, quit the crew for “personal reasons.”

Flight Lieutenant Will Cambridge, 39 (left), a Red 4 who was allegedly having an affair with a junior female colleague, was suspended. Squadron leader Nick Critchell, 36, quit due to a “toxic culture”

Former Minister of the Armed Forces and committee member Mark Francois told MailOnline that the air force had many questions to answer.

Regarding the evidentiary hearing scheduled for next month, he stated, ‘I cannot speak for the entire committee, but it is likely that events involving the Red Arrows will be discussed at that hearing.

In addition, the committee has requested that the Chief of the Air Staff testify prior to the holiday season on a variety of RAF-related issues, including this one.

The display team is the pride of the Royal Air Force and the public face of the service, performing death-defying stunts and producing perfect plumes of red, white, and blue smoke at major British events and royal celebrations.

However, Sir Mike’s ongoing investigation, initiated in December 2021, has uncovered detrimental issues within a team that was already operating below capacity.

One member of staff stated, “The girls who join the squadron are essentially regarded as fresh meat.” All [the males] are married, yet they won’t leave their wives alone.

“It’s a poisoned atmosphere… There are no women in senior positions. It is governed by misogynistic white men,’ she told The Times.

She claimed that many women were “at risk” because to the various “toxic pockets” inside the RAF, but there is “no hurry to act,” noting that senior staff members “swept allegations under the rug” to protect the reputation of “untouchable” individuals.

Reportedly, alleged victims were warned for months that speaking up might result in them being sent home or sacked from the force.

Four Red Arrows staff are being investigated for alleged ‘inappropriate conduct,’ with Mr. Ingram stating that this could be “only the tip of the iceberg.”

The ongoing investigation initiated by Air Chief Marshal Sir Mike Wigston (pictured) in December 2021 has uncovered negative concerns in a crew that was already functioning at a deficient strength.

At least thirteen reported cases of sexual harassment, assault and sexual assault, bullying, intimidation, indecent exposure, victimisation,’misunderstanding of consent’, misogyny, and isolation have been documented by the non-statutory inquiry.

This comes after Armed Forces minister James Heappey dismissed reports that a ‘hold’ had been placed on job offers for white men in favor of women and ethnic minorities in order to meet “impossible” diversity goals.

He stated that Sir Mike had requested that the team “stop” the availability of all training spaces while he and his leadership assess how they may take constructive action to improve diversity levels on various training courses in the year leading up to March 2023.

According to Sky News, the RAF recruitment staff received an order from the chain of command on August 2, but no policy has been applied.

Members of the Red Arrows, headquartered at RAF Scampton in Lincolnshire, have also been accused of intoxication, although a spokeswoman for the Royal Air Force stated that the charges were “unfounded.”

Mr. Heappey expressed confidence to Times Radio that Sir Mike and his staff were conducting an investigation into the claims.

He stated, “Across the board, the greatest standards are expected of our armed personnel, and 99.99% of them deliver in spades.

‘Those who have the honor of working in an organization such as the Red Arrows have, in my opinion, a higher responsibility because they are so visible to the public, and the claims that have been made are really troubling.

The Royal Air Force has, in my opinion, taken the correct action by launching an investigation into the individuals against whom these claims have been made.

Regarding the most recent complaint, the RAF stated to The Times, “The RAF has a zero-tolerance policy for improper conduct and will conduct exhaustive investigations into any allegations and take necessary action.” However, we will not comment on the circumstances surrounding specific personnel changes.’

Former coworkers label as “traitors” RAF Top Guns who taught the Chinese how to shoot down aircraft.

Former RAF pilots who instructed the Chinese on how to shoot down Western planes were branded traitors last night by enraged comrades.

According to defence officials, up to 30 Top Guns, including former Red Arrows pilots, are transferring important expertise and experience to the People’s Liberation Army (PLA), posing a grave threat to national security.

They are not breaking the law, but the minister of the United Kingdom’s armed forces said legislation will soon be modified to prevent veterans from assisting a foreign opponent, especially one deemed our “number one threat.”

James Heappey, who fought in Afghanistan, stated that the pilots’ conduct “did not align with my view of service” because China is a “foreign force that threatens British interests.”

According to defence experts, up to 30 Top Guns, including former Red Arrows pilots, are transferring important expertise and experience to the People’s Liberation Army (PLA). This poses a grave threat to national security.

Those who accept the £250,000-per-year positions with privileges have been warned of the repercussions of their actions, he disclosed.

Mr. Heappey stated yesterday, ‘We’ve been gravely concerned for some time. Our counterintelligence division has been ensuring that they understand what they are doing.

“We have engaged those implicated and made it plain that we do not expect them to be a part of that organization [the PLA],”

“[The pilots] have opted to disregard that recommendation.” We are going to make it unlawful by changing the legislation.

“Once persons have received this warning, it will be illegal for them to continue with this instruction. China is a competitor that poses a danger to the United Kingdom’s interests in numerous global locations. It is not a secret that their attempts to gain access to our secrets and recruitment of our pilots – in order to learn the capabilities of our air force – are cause for concern.

Some former RAF pilots have been more forthcoming, listing their assignments on LinkedIn. A file photograph is seen above

According to reports, a South African flying school may have recruited former Red Arrows. They serve as PLA instructors throughout China. Their salaries are supposedly complemented by luxurious housing, servants, and sports cars.

As outrage mounted last night, retired Rear Admiral Chris Parry stated, ‘These prospective traitors must be identified, humiliated, and rejected.’ It disgusts me that people believe it is OK to pay for services that enhance a totalitarian regime’s ability to defeat democratic nations.

Next Monday, Home Secretary Suella Braverman will announce new laws requiring all foreign agents to register with the British government. Those who fail to comply might face up to five years in prison.

However, friends of the pilots attempted to minimize the dangers. Under the condition of anonymity, one individual stated, ‘The boys don’t want to talk.

They have nothing to gain by revealing themselves, and their exposure would bury them. The sum of money was enormous and life-altering. Obviously, they do not perceive any danger. The knowledge they impart is extremely general. However, it is intended to increase the piloting skills of the PLA, therefore it is not perfect.’

Some former RAF pilots have been more forthcoming, listing their assignments on LinkedIn.