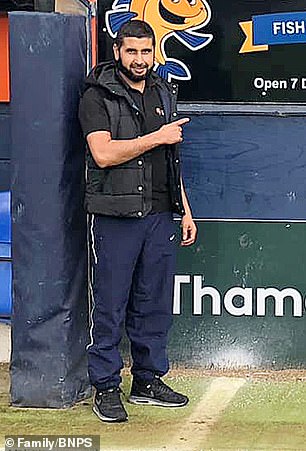 An inquest heard that a father of two plummeted to his death while attempting to ascend a famous south coast monument in front of his family.

On a family outing to Lulworth Cove in Dorset, Azhar Baig and his brother-in-law scaled the 100-foot-tall arch known as Stair Hole.

Before their disastrous third try, the two had previously leaped from the top of the limestock rock into the ocean.

Mr. Baig tripped and fell while climbing the rock wall, striking his head on the rocks below. It is believed that he fell around 20 feet and died at the scene of head trauma.

The 47-year-brother-in-law, old’s Imran Baig, who was climbing above him, observed the fatal event.

The inquest into his death in Bournemouth revealed that he had traveled to Dorset in July 2021 from his hometown of Luton, Bedfordshire, with his wife, children, and brother-in-law.

The group had planned to visit Durdle Door, but when the parking lot filled up, they chose to visit Lulworth Cove instead.

Mr. Baig and Imran Baig decided to undertake the hazardous endeavor after observing a limited number of individuals scale one side of the arch and “leap from its top.”

Mrs. Baig’s widow, Naeem Akhtar, told the coroner that after hearing Imran shout, she turned to discover her husband face up in the water, unconscious.

Several off-duty soldiers on a day trip from the adjacent Lulworth Camp raced to aid Mr. Baig, who operated a fish and chip shop in Luton, and pulled him from the water, according to testimony at the inquest.

Despite the efforts of paramedics and coastguards, he was pronounced dead at the site. A postmortem examination revealed that he died from head trauma.

Ms. Akhtar stated, “People were leaping over the stone arches.” Azhar has successfully leaped from the arch multiple times.

“When I turned around after hearing my brother yell, my spouse was laying face up.”

When the incident occurred, we were returning from Stair Hole to the rest of the family at Lulworth Cove.

She questioned whether sufficient signage were in place to alert people of the dangers linked with the Lulworth Estate-owned property.

However, the owner and manager of the Lulworth Estate, James Weld, stated that every visitor to the area will have passed “at least one warning sign.”

Mr. Baig’s family paid tribute to him by stating, ‘Az was full of life and joy, always serving with a grin, and spreading joy wherever he went. He will be missed much.

Brendan Allen, the area coroner for Dorset, recorded a judgement of accidental death and described Mr. Baig’s death as a “awful tragedy.”

Mr. Allen remarked, “This is clearly a dangerous endeavor.”

On his third effort, he slipped, struck the rocks, and then fell.

Tahira Jabeen, a 46-year-old mother of five from Birmingham, fell to her death from the nearby Man O’ War Bay cliffs in June 2021 while attempting to take a shortcut down the bluff.

Mr. Allen continued, “If there is any silver lining to this (Mr. Baig’s death), it is that people will pause to consider the cost before incurring it.”