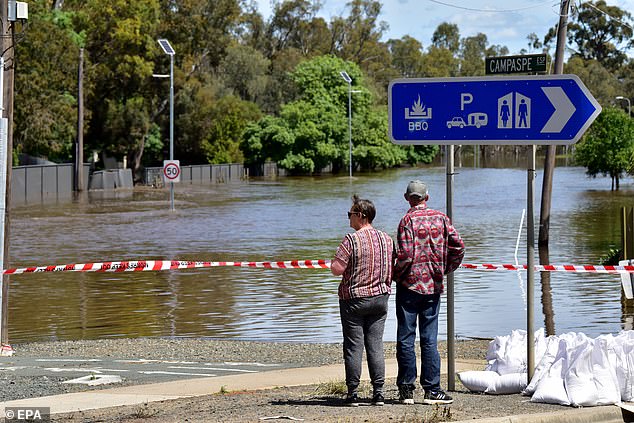 As their town prepares for its greatest flood in thirty years, residents have been told to leave their houses before they get cut off for days.

Four significant flood warnings have been issued for Victoria’s northern regions as the current flood disaster enters its second week.

The Murray River might reach 95 meters by Friday at Echuca, which is on the border of NSW and Victoria, surpassing its highest during the disastrous floods of 1993.

Sandbags have been used to construct a 2.5 km flood levy that divides the town in an effort to save thousands of residences and commercial buildings.

Authorities on Thursday afternoon issued an emergency evacuation alert for portions of Echuca near the Campaspe River and Echuca Village because the water was likely to rise in the next hours.

Residents in the affected districts have been told to flee right now before it’s too late.

“You could get isolated for a few days if you don’t move soon. According to the VicEmergency warning, if you decide to remain, emergency responders may not be able to assist you.

The evacuation route is open for now, but things can change.

Residents of Echuca have been asked to reduce water consumption and take fewer showers since floodwaters have damaged the city’s sewerage facilities.

According to officials, “this will decrease the amount of water being discharged to the sewer when flood levels are high.”

At the Bendigo Showground, an emergency assistance center has been established for evacuees.

The nearby settlements of Lower Moira and Barmah also received emergency evacuation orders.

Authorities have issued a warning that the current record will be broken over the next 30 to 48 hours, with the river predicted to peak at 7.6 meters.

The fact that several hundred Echuca homes are situated on the wrong side of the levee surprises many people.

Despite the evacuation orders, the town is bustling with activity as many citizens have spent the last several days constructing the artificial levee.

In heartbreaking photographs, scores of Echuca villagers could be seen attempting to construct sandbag barriers to save their town from disastrous floods.

On Wednesday, as further financial aid was sent to areas affected by the harsh weather, the death toll from the state’s continuing flood catastrophe increased to two.

Locals were seen hunched over the huge sandbags in photos taken on Wednesday, while others used construction tools to make earthen barriers.

Residents were spotted building the mounds with the aid of fire personnel while defending the neighborhood McDonald’s, bars, shops, and residences.

The border between NSW and Queensland is expected to be the hardest hit by another chaotic weather pattern that is expected to deliver heavy rain to Australia’s east coast.

The McDonald’s in Echuca (above) has a substantial sandbag wall around it to prevent floods.

Sandbags are seen lining one property in Echuca as flood waters continue to rise.

On Tuesday and Wednesday, the outback of South Australia saw unprecedented rainfall, with some regions getting more than Victoria had ever seen.

Heavy storms are also hitting Queensland’s outback, with some places expected to get more than 80mm of rain by the end of the week.

The cyclone will also bring further heavy rain to Victoria, and the wet weather is expected to last through Sunday over all of the eastern states.

It means Emergency Recovery Victoria will oversee the initial step of clearing the first wave of risks from homes and businesses that have been damaged or destroyed.

The worst-affected districts have received up to 400 ADF soldiers who will help with door-to-door outreach and sandbag distribution.

“Now that we are in the cleanup phase of this calamity, they will also be aiding more individuals.”

Murray Watt, Minister of Federal Emergency Management, said the additional funding will benefit some of the hardest-hit towns in the country.

»Echuca people are evacuated as Murray River surges in Victoria«